The following is a non-spoiler review of The Suicide Squad, as long as you have seen the trailer. I saw The Suicide Squad at BFI London IMAX on Friday evening, released in the UK a little earlier than in the US, but only cinematically; Americans will get the chance to see it on HBOMax at home instead, something denied us Brits. But I feel Americans who do that will be the worse for it. The Suicide Squad, written and directed by James Gunn, has deliberately been designed to benefit from the big screen, especially the final arc. With the scream "we've got a Kaiju!" the action really benefits from a sense of scale, especially in contrast with the teeny tiny characters involved.

And there are so many characters that James Gunn draws from across the DC Universe. Even Corto Maltese, the South American stand-in for Cuba, Nicaragua, Grenada, whichever you want to choose is a) named after a famous pirate comic book, b) was first used as a DC Comics location in The Dark Knight Returns by Frank Miller and c) sounds perfectly non-fictional. Gunn is throwing everything against the wall to see what explodes.

Lots of people did in this film. Some are people you don't expect to die. Some you don't expect to survive, yet somehow do. Some you hope will die, won't. Some you wish would survive, definitely don't. But by the end, slightly more will have survived than you thought in the moment. But you have seen over a dozen DC Comics characters lined up for this film, and you know that you are going to come down to a small handful by the end, so you can start taking your bets. Of course, that also makes you the bad guy.

Repeatedly, the film underlines that no one here is the good guy. Amanda Waller and the operations team, absolutely not. The villains recruited into the Suicide Squad, definitely not. Even Weasel has eaten a bunch of kids. All there is are relative levels of evil that, in perspective, could be seen as being heroic. But even when Bloodsport is in his most saving-the-day, crowds of innocent people get slaughtered. It's not a good look for anyone.

But at least with the Suicide Squad, the oppressive government, and the revolutionary terrorists, it's easier to tell with their blazing guns and polka dots ripping through each other. It's harder to initially get that take with Amanda Waller's home office, where the mundanity of evil sets in. These people (like you) have taken bets on the first of the Suicide Squad to die and just get on with the administration of Task Force X rather than address moral questions. And again, any heroic actions they may later undertake can only be seen as that in the context of everything else going on. Absolute power corrupts absolutely, especially when one is sitting at a desk making life and death decisions thousands of miles away. Viola Davis as Amanda Waller, a highlight of the first film, turns up the ruthlessness one more notch.

Because they also make far more mistakes than any of the Squad, from simple research and preparedness to mistaken information given to the Squad that proves costly, and pretty much being wrong about everything. It is the constant screwup of the head office that any employee will be able to relate to. Maybe more would have lived if they'd actually done what they were meant to do — but none of their heads get blown up.

But to balance the deep darkness of terrible people doing terrible things, whether deliberately or by just not caring, James Gunn balances this with batshit craziness. The ridiculousness of Peacemaker's helmet, the stupidity of King Shark, and the ludicrousness of Polka-Dot Man's… well, everything, makes Harley Quinn look positively reasonable in comparison. And yes, let's talk about Harley; rather than being subsumed by the rest of the Squad, she is a standout. That's tricky to do in Margot Robbie's third such outing, but she makes the kind of choices that Harley is wont to make, gets over the innate menace and capability of the character as well as her loose cannon nature.  If anything, Idris Elba probably most disappoints as Bloodsport; he is the tritest of the characters, his actions the most two-dimensional here, even when compared with jokey compatriots. He's… fine. It just feels like he could have been as mad as everyone else and instead wasn't. Ratcatcher, played by Daniela Melchior, works as the slouchy teenager, less so as the reluctant hero that she is forced to become. David Dastmalchian's portrayal of Polka-Dot's own parental issues is much more convincing and makes for a real visual highlight in the denouement that will be memed forever. And Peter Capaldi's Thinker contains such multitudes, jumping from a man of serious scientific research to hedonism to utter self-survival, that it's easy to see him as one who has equivocated away any morality to continue the legacy of the Nazis in Corto Maltese into the present day (and also, love that flashback). But, given the moral equivocation of the film, it's no surprise to find he is actually keeping the peace and holding everything together. But it is a bit like discovering that Jeffrey Epstein was actually holding back the pandemic. But the biggest revelation will be John Cena as Peacemaker, as a killer as ruthless as he is mentally inflexible, played utterly straight for maximum laughs, bodes well. The character that originally inspired Watchmen's Comedian, here he is more the opposite of Rorschach, absolutist in the other direction.  In that case, Peter Capaldi's Thinker is playing the role of a Nazi Ozymandius, and it is Rick Flag who becomes the All-American Rorschach. And oh look, they all got to fight a massive squid at the end as well. It's why I am left calling this movie The Stupid Watchmen, not as a derogatory comment but in praise of it. The Suicide Squad is much more entertaining than that other film by consistently refusing to take itself seriously at any point but ending up making a far more serious and believable point about governments of all political stripes. Because sometimes you need the guy dressed in polka dots, a giant walking shark, or someone with a toilet bowl on his head to point it out.

And yes, that's a very fun cameo to put in the film, James Gunn. And a teensy tiny hint of an MCU/DCU crossover to come one day. The Suicide Squad was released in UK cinemas last Friday and in the US from this Thursday. 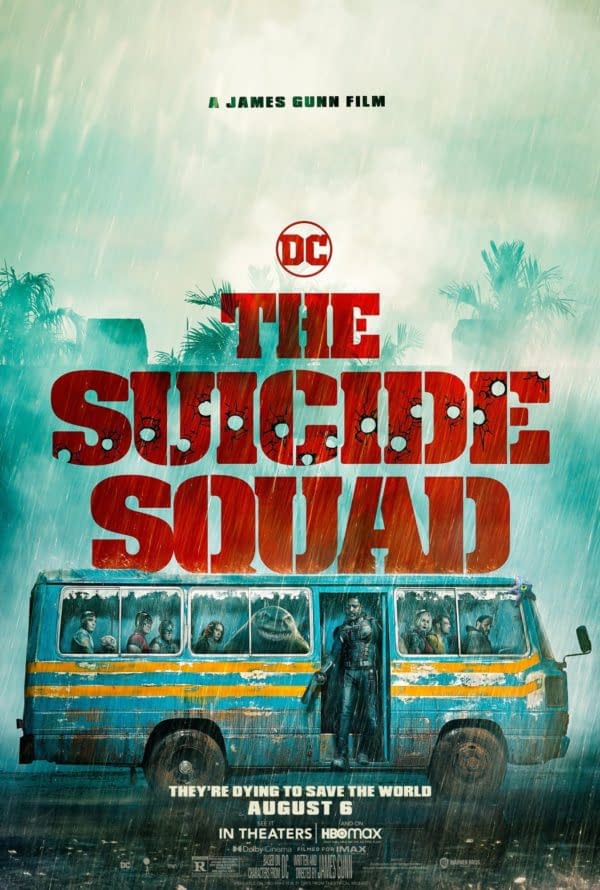