ROW 19 brings a lot to the table with its story and take on mixing horror with thriller, reminiscent of past films in either genre. Directed by Alexander Babaev, the film will be released digitally and on Blu-Ray (and DVD) on May 31st. ROW 19 stars Svetlana Ivanova, Marta Timofeeva, Wolfgang Cerni, Ekaterina Vilkova, Anatoliy Kot, and Victoria Korlyakova.

"When several flight passengers suddenly suffer gruesome, unexplained deaths, a young doctor on board begins to suspect that the shadowy, terrifying force behind her own worst childhood nightmare may be back for blood."

ROW 19 was an interesting journey both in narrative and direction. Some wonderful acting was very obvious throughout the film, especially from Ivanova and Timofeeva. It's a beautifully shot film, with some moments being incredibly poignant and shocking. The music, at times, would end up being a little too much and didn't necessarily fit the scene or blend well with dialogue also going on at the same time. But whatever was lacking in terms of sound mixing for ROW 19, it made up for all of that in costume and makeup.

This horror-thriller has plenty of tense scares that will have you clutching your seat…hopefully not on an airplane (for the sake of any anxiety). It ends up being a fairly decent film, one that would sit upon my shelf of other DVDs and Blu-Rays. The ending of ROW 19 was something that made me believe I'd have to watch the film once or twice more to understand how it connected, but overall it was effective.

Mixing the panic and protective themes of Flight Plan with the horrors and calculations of death, ROW 19 worked with the material past films gave it and did a good job. If you'd like to watch it yourself, it comes out on multiple platforms, from Blu-Ray to On-Demand on May 31st. The film is in Russian, available with English subtitles and an English-dubbed version as well. ROW 19 has a runtime of approximately 78 minutes and is not rated. 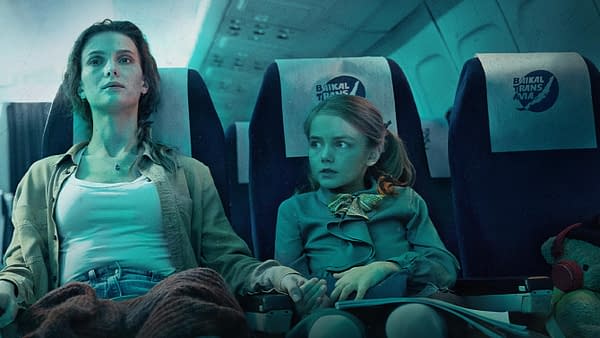 Review by Brittney Bender
8/10
ROW 19 take a shot at navigating a horror story in an airplane setting with a bold lens on the themes found within trauma. While missing the mark at times when it came to sound and music, the film is incredibly entertaining and worth the watch.
Credits
Production
Well Go USA Entertainment
Director
Alexander Babaev