More than 25 years after introducing slasher perfection, Scream is finally back to reinventing modern horror films – once again raising the stakes and claiming its spot as horror's most unrivaled franchise to date.

After the release of the fourth chapter in 2011, there has been an obvious pivot for the genre that has since leaned into slow-burn psychological horror over knife-wielding slashers. However, just a few years ago, we've started to see younger viewers take an interest in Scream's legacy and a slasher resurgence, so there came an obstacle of appeasing two distinctly different audiences. A cinematic duality of making Scream feel like a new entry, but still a technical sequel ("requel") that we've seen in properties like The Matrix and Halloween.

Though those two aforementioned films were early (fairly effective) attempts at formulating a proper "requel" idea, the new Scream (by Paramount Pictures and Spyglass Media Group) overcomes that obstacle and now sets the standard for reinventing franchises while respecting the importance of homage material.

The legacy of Scream is and will always be considered to be horror excellence in every shape possible. After introducing the rules and offering commentary on sequels, trilogies, and reboots alike, the new Scream has a meta-powered take on the love for horror classics – and looking inward at the alterations to the genre.

The nod to legacy is felt throughout the film, with Sidney, Gale, and Dewey having roles that feel very reasonably connected and a natural growth for the beloved trio. Seeing them take on pseudo-matriarch/patriarch roles to this next generation is a practical shift that finds ways to integrate their history within the franchise without treading down a repeat path that many horror sequels/requels are guilty of relying on.

Scream's choice to pull things back to the Macher house, reference the original film's events, and the significance in focus regarding the first series of Woodsboro murders aligns everything that fans of any Scream entry would unknowingly gravitate to. When you refer to Scream's legacy outside of Ghostface, the trio (Neve Campbell, Courtney Cox, and David Arquette) is synonymous with the slasher world, and there's no sidelining their irreplaceable kinetic energy. Luckily, the new Scream recognizes that and makes appropriate choices to showcase the magic of a returning final girl or final boy.

In each Scream film, we're introduced to a group of suspects that end up adding to the inherent 'whodunnit' nature of the franchise. While the cast is nearly always killed off by the end, there isn't always a chance to develop attachments to some of those next-gen faces. The new film not only tackles the notion of really accessing new viewers with fresh faces but gives them plenty of importance to keep things present-day.

The new cast enamors audiences, with killer performances from new blood Jenna Ortega, Melissa Barrera, Jasmin Savoy Brown, Mason Gooding, and Mikey Madison – each making their role feel like effortlessly solid additions to the extensive list of Scream characters in the past. There are obvious nods to previous high school demographics within the group (horror buff, jock, the popular girl, etc.) but reimagined to fit Gen Z viewers and enough to establish them thoroughly where you find yourself invested in their eventual outcomes. While Scream 4 was the first to attempt a next-gen inclusion, Scream dives headfirst into that concept in a time where viewers are finally ready to revisit its trademark razor-sharp genre intelligence.

From an opening scene that is the most effective since the first film to a final act involving as many people as possible, Scream's future looks brighter than anyone could have imagined over a decade later.

Plenty of Surprises Along the Way

If you go into a Scream film expecting to predict the outcome, you're most likely going to be wrong, or at the very least, doubt yourself from time to time. The newest title follows some elements of the 1996 blueprint, which is genuinely timeless enough to still make you believe that quite literally anything is possible.

There are major scenarios in Scream's relaunch where the characters feel at risk and viewers are reliving the undisputably suspenseful atmosphere as if it has involvement from original director Wes Craven himself. Regardless of if it's a subtle (or overt) nod to any of the other films that led to this revival, or a pivotal scene involving the new cast, there are so many scenarios to keep you on edge – because the new Scream is a raw theatrical experience that you'll need to see for yourself to believe.

A Final Act That Can't Be Replicated

As a longtime Scream aficionado and someone who views the franchise as being some of the genre's best offerings ever – there's a certain level of technicality that fans expect from anything titled Scream. The three seasons of a television series have tried (and not so successfully had that same revved-up ambiance), but the recent return to film rivals the first and third films in terms of final-act magic.

Without going into spoiler territory, this evolved Scream has quite the kick-off for its third act and is relentless in both vision and execution for the duration of the runtime. There's so much to take in and several misdirects regarding possible outcomes, killer potential, or fates that it will easily demand multiple viewings just to fully appreciate how grand of a finale the film offers.

Another remarkable facet comes from the finale's ability to keep everyone remaining at play, with the most chaotic conclusion the franchise might have ever seen. For fans of both next-gen horror and nostalgia-infused context, the new film offers audiences a pulse-pounding, feverish final act that will be dissected for decades to come.

Scream slices into theaters on January 14. 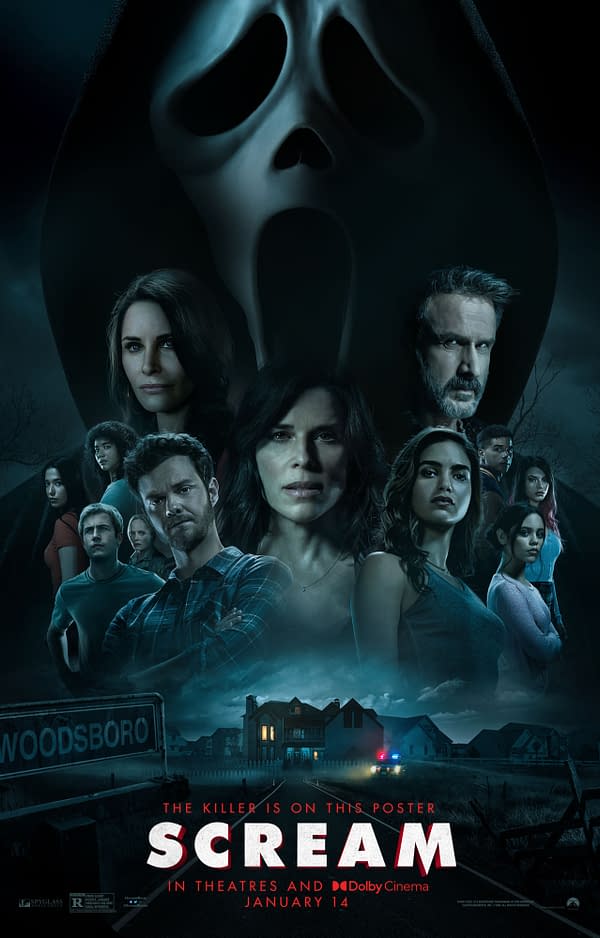 Review by Aedan Juvet
9.5/10
Scream reinvents horror once more, with uncanny wit, nonstop brutality, and some of the franchise’s most memorable moments so far. The legacy of Scream's evolution continues, and Wes Craven would be so proud.

Avatar Star Discusses Filming Without CGI in an Effects-Heavy Film

Avatar: The Way of Water star Jack Champion reveals how his lack of CGI scenes were filmed and details his co-star placeholders.

Ghost of Tsushima Film Gets An Update from Director Chad Stahelski

The director of John Wick recently offered his (optimistic) update on a live-action adaptation of the popular Ghost of Tsushima video game.

In a recent interview, the directors of Scream VI discussed the film's connection to other sequels and Kirby's significant role.

Cloverfield Director Reveals the Meaning of the Film's Final Scene

The director of the 2008 found-footage film Cloverfield recently offered more information on the cryptic final scene often debated by fans.