The Wandering Earth is the China's entry into big Science Fiction blockbusters that Hollywood has dominated for decades (and will probably continue to). Adapted from a novella by Liu Cixin, it goes for the big Bruckheimer approach that Bruckheimer doesn't make anymore. 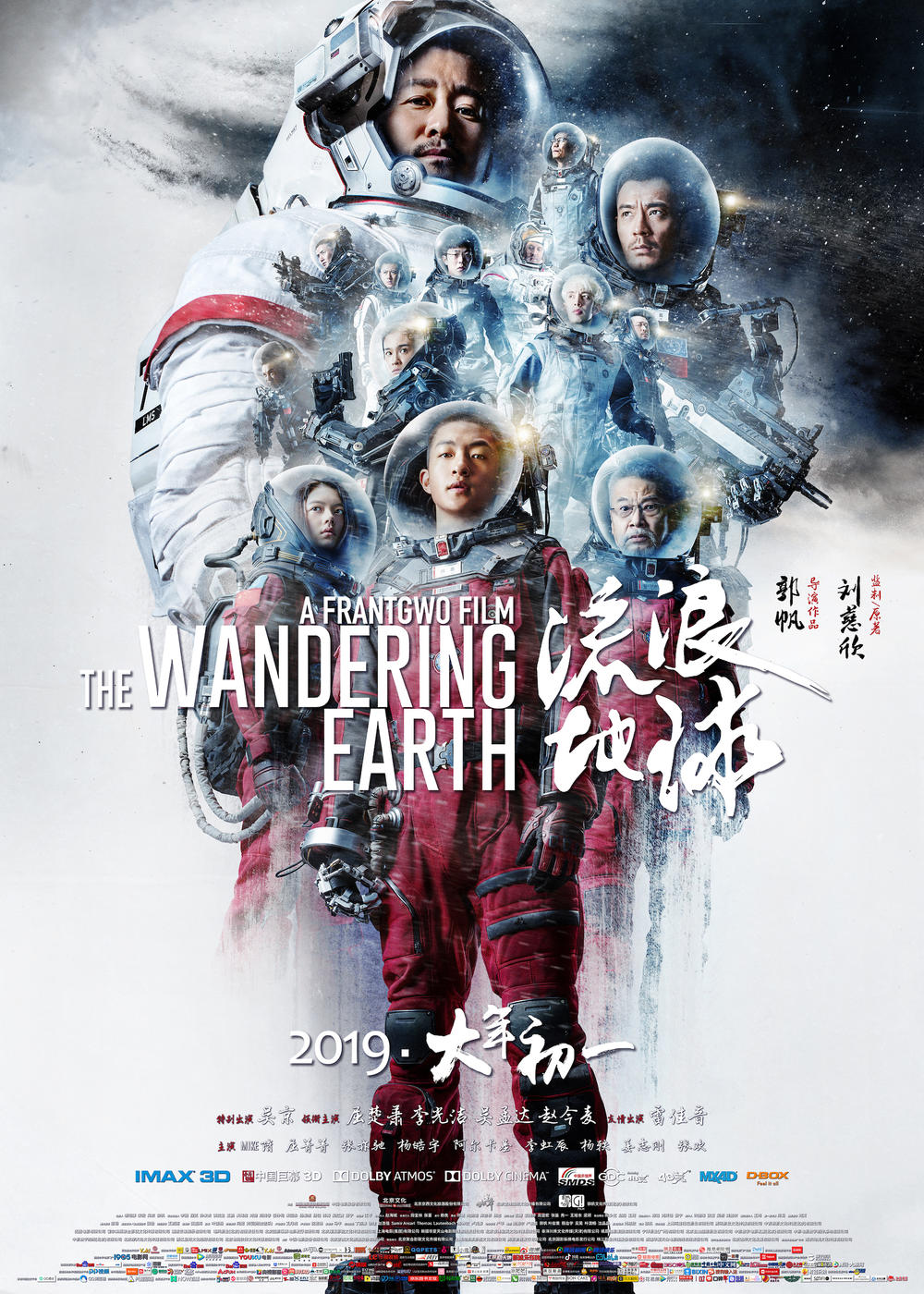 The story comes with Liu Cixin's hard science fiction: in the future, the sun becomes unstable and will go supernova in a hundred years, wiping out the solar system. The world's governments unite to form a single body to save the Earth by building thousands of massive engines to push the Earth out of the solar system to another more stable solar system, a journey that would take 2,500 years. This means hard sacrifices. Half the world's population enter a lottery to live in underground bunker cities, away from the tidal waves and weather changes that would wipe out all life on the surface.

There are plots that would be familiar to any Spielberg blockbuster, including the story of the family living through the first leg of this journey. Martial arts star Wu Jing plays Liu Peiqiang, the Chinese astronaut assigned to pathfinder duty onboard the space station that serves as guide and organizer accompanying the Earth. He leaves his father to look after his 4-year-old son Liu Qi after agreeing to let his dying wife pass away so the rest of his family can have a place in the bunker cities. 17 years later, his son has grown up raging with daddy issues, resenting his absence and his letting his mother die.

Liu Qi, now a tech genius and apprentice engineer, decides to run away from the city to the surface and his adopted kid sister Han Duoduo, a bored, bratty teenager tired of the cramped bunker city, tags along to see what the outside world looks like. What they find is a world of frigid instant life-killing temperatures, tidal waves turned to ice and the wreckage of big city landmarks.

Then a navigational error throws the Earth right into Jupiter's gravity instead of the original course of slingshotting off it. The world engines all suffer catastrophic failure and the Earth has less than 40 hours to restart them before the whole planet gets splattered like a moth in a flame in Jupiter's atmosphere. Li Qi, Duoduo and their grandfather are roped into the rescue mission with a  military platoon to get to the nearest engine to restart it.

Meanwhile, on the space station, Li Peiqiang and his fellow astronauts are ordered by MOSS, the AI, to go into hibernation to preserve power during the crisis, but he suspects the AI is lying to them and sets out to find out the truth with his Russian cosmonaut best friend Markorov. You don't need to remember 2001's HAL to think something is amiss. AIs in movies always turn out to be evil, but this turns out more complicated, ruthless and tragic than that.

If you're familiar with Hollywood blockbusters like Armageddon, 2012, The Day After Tomorrow and San Andreas, you'll find this movie familiar, only it's Chinese. There's a directness in its gaze at the harshness of the dystopian future that Hollywood often shies away from.

They certainly stretched the $48 million budget to make it look like $200 million, but not having to pay inflated movie star salaries, high union dues and Hollywood studio overheads and "creative accounting" certainly helped. What makes it different – apart from the absences of a "rah-rah America" message – is the Big Crazy Science it sticks to more than Hollywood blockbusters do. The heroes find a way to save the planet with a Big Crazy Science solution that's both hilarious and insanely epic.

The message of this movie isn't patriotism but that everyone is in this together. There's less of a big Chinese propaganda message in the movie, and more an allegorical call for action for the world to get together to do something about Climate Change before it really destroys the world. The message is more internationalist here, America is off doing their own thing, the same as everyone else, to restarts the engine to save the world.

(They still have a problem with racial stereotyping, though. There's a supporting character named Tim who's half-Australian, half-Chinese and most of his lines are about insisting he's Chinese enough not to be called a foreigner, and the only time we see any Japanese characters is when they're committing suicide out of despair, because the Chinese seem to think that's what defines them.)

There's a lot riding on The Wandering Earth. It's China's first Science Fiction blockbuster movie and one to herald a new era of big Chinese Science Fiction movies if it's a hit. Well, judging from box office figures – a take of US$300 million in China alone during opening week – and audience reaction on Chinese New Year opening week, that could be on its way.

Just about every screening in New York City during opening weekend was sold out, and when we left our screening, there was a Chinese media team outside the screening room interviewing the audience about it. They also had a screen where director Frant Guo was livestreaming from China to talk to the audience and asking them what they thought of it. The almost all-Chinese audience loved it.

China wants to make big epic Science Fiction movies now partly as a propaganda campaign to promote its space program – they've landed on the dark side of the moon, after all. It's also the next step for the Chinese Film Industry since Science Fiction is looking to the future rather than the past. The message isn't about fighting and killing foreign enemies anymore but saving the world.

China would love to make movies that are as popular worldwide as Hollywood's, and it's a steep learning curve. The Wandering Earth is a first step. It's safe, mostly inoffensive and with a largely positive message. They have no problems getting the Chinese audiences abroad to show up, but they're going to have figure out how to market to audiences beyond the Chinese expatriate community if they want to grab some of that non-Chinese demographic.

The Hospital, an adult animated Sci-Fi comedy from Maya Rudolph and Natasha Lyonne, has been given a two-season order from Amazon.

ABLAZE Publishing's new collection of the classic newspaper strip Friday Foster: The Sunday Strips, by Jim Lawrence and Jorge Longarón, has been nominated

Suzume no Tojimari: Crunchyroll Brings New Shinkai Movie to US in 2023

Now that we have a new Thor: Love and Thunder trailer it's time for two new high-quality images as well. We have one of Gorr and another featuring both Thor's.

Here is our big Summer Box Office Preview, what do you think will be the biggest film of the Summer? Jurassic World should rule them all.

The trailer for Idris Elba thriller Beast was released this afternoon. The film will open only in theaters on August 19th.