For once, I say "magpie" like it's a good thing.

Time to stop and take stock of DOCTOR WHO now that it's taking its mid-season break, the first of its kind as it adopts an American-style scheduling model. Steven Moffat had said he took this approach this year to give BBC1 a ratings hit during the Autumn when the show returns, a time when WHO is normally off the air in previous years. DOCTOR WHO has always been upfront about the fact that they cadged many of their storylines from classic movies and books. In the old version of the show, they had mad scientists, space ships and battles, which were the staples of Fifties and Sixties Science Fiction and also took from old Hollywood serials of the 1930s and 40s. It was Tom Baker's first three seasons, starting with the 12th of the original series, under producer Philip Hinchcliffe and script editor Robert Holmes (still considered one of the most talented and wittiest writers of the original show) that they openly admitted to basing stories on classic movies like FORBIDDEN PLANET (in "Planet of Evil"), FRANKENSTEIN ("The Brain of Morbius"), THE MANCHURIAN CANDIDATE ("The Deadly Assassin") and so on. That tradition has carried on under pretty much all the subsequent producers and script editors. 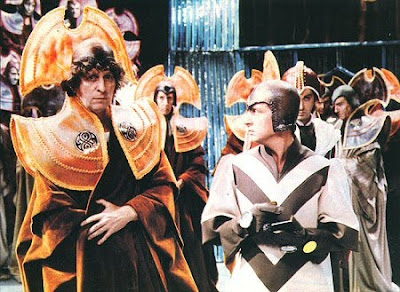 I'm not slagging off DOCTOR WHO for lifting plots and details from classic books and movies, especially when it does it well. The majority of network television drama tends to lift plots straight from movies and does them with a cheaper budget, which is why, for decades, movie people in Hollywood have looked down upon TV people with contempt. I've lost count of how many genre shows in the last few decades have rehashed the plot of THE SEVEN SAMURAI, the most recent example being the STAR WARS: CLONE WARS cartoon series. I'm not encouraging any writers to rip off other writers' ideas wholesale, but storytelling involves often using ideas encountered from other people's work and assimilating them for one's own as opposed to just copying it. For me, DOCTOR WHO gets a pass because it makes it fun and it gives back: it makes many viewers interested in the source material or other works like it. 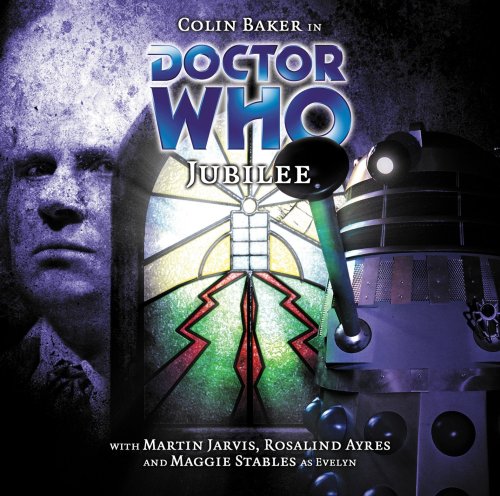 What sets the current version of DOCTOR WHO apart from other shows is the sheer self-conscious geekiness with which they lift ideas from other books and movies. It's practically become a badge of honour. The key difference between the writers of the current show and the old show is that Russell T. Davies and Steven Moffat are comics fans and genre geeks and it shows. This includes the writers they commissioned to write for the show, including Paul Cornell, who was one of the most prominent of the Virgin WHO novels of the 90s and pulled an adult Alan Moore-style revamp of the character and continuity. The beauty of a show like DOCTOR WHO is that traversing all Time and Space, it can be about almost anything, which gives the writers licence to nick ideas from almost anywhere. What they do well is integrate the lifts so they feel organic to the story. Hell, they've even cannibalised themselves by lifting ideas and elements from the Virgin novels and recent BBC novels, adapting Paul Cornell's "Human Nature", taking the basic idea of the 90s audio drama "Jubilee" and making it into "Dalek", adapting Moffat's short prose story "Continuity Errors" into the Dickensian 2010 Christmas special (though for my money, "Continuity Errors" was much funnier and more subtle).

One thing WHO does with the lifting and referencing is that it encourages curious viewers to seek out the original versions, since they had to be have been pretty damn good for the writers to lift from them in the first place. In a funny way, this helps fulfill the BBC's brief to "educate and inform". In this case, it happens to be for Literature.

So just for fun, and while everyone is going through withdrawal waiting for the show come back in the Autumn, here's a brief list of the most notable bits the current show has cadged from. You can find other bits that reference other comics, Science Fiction, and Literature to add to the fun:

Russell T. Davies and writer Mark Gatiss clearly set out to do a quick introduction to the life and career of Charles Dickens and most notably the ghost stories he wrote. What Gatiss gets right here is the eerie atmosphere of Victorian ghost stories, specifically Dickens' in a love letter to the man and his life. Of course, every kid in Britain gets forced to read at least some Dickens while in school, but this episode reminds us that Dickens can actually be fun.

As with "The Unquiet Dead", writer Gareth Roberts, already an expert at writing pastiches of different writers' styles and voices in the Virgin novels, writes a deconstruction and commentary on the English murder mysteries of Agatha Christie, whose novels pretty much define the entire genre. Again, this is a love letter to the author's books as well as a sly Sci-Fi fantasy about the mystery of what really happened to her in the days she went missing while reeling from her husband's infidelity. Roberts deserves special mention for also writing a comic story in Doctor Who Monthly where Mickey is forced to have the 10th Doctor as a flatmate while Rose and the Tardis' return are delayed, and the story was adapted into the 11th Doctor episode "The Lodger" last season. Roberts also wrote a year's worth of excellent 9th Doctor comics stories in Doctor Who Monthly that perfectly captured the tone of Davies' revival in the first season of the new show. 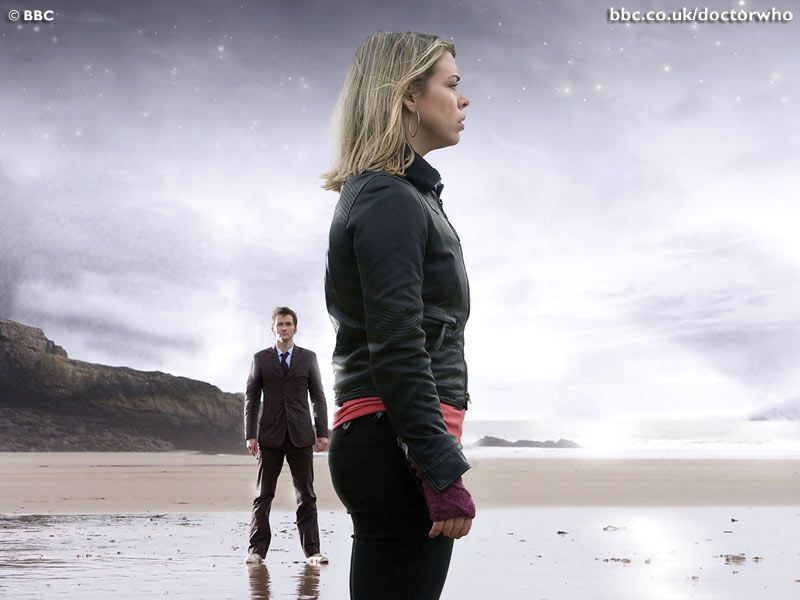 Now we're coming to talk about direct lifts from novels instead of references or pastiches. The climax of Season Two of the new show and Billie Piper's exit sees Rose and The Doctor forever separated by a barrier that divides parallel universes. This plot detail is directly lifted from the climax of Philip Pullman's HIS DARK MATERIALS trilogy, where the two teenage heroes Will and Lyra have saved their respective universes, but are forever separated by the riff that closes them off from each other. I think Davies has more or less copped to this, and the show has been met with approval from Philip Pullman himself, so all is well.

"The Stolen Earth" and "Journey's End"
This is more in tone, but I'm pretty sure Russell T. Davies was aiming for a superhero comic book-style Big Crisis Crossover with returning supporting characters reuniting, including those from THE SARAH JANE ADVENTURES and TORCHWOOD, with The Doctor to save the universe together in the Season Four finale 2-parter "The Stolen Earth" and "Journey's End". Certainly had a Justice League or Avengers feel to it all. Of course we have to talk about River Song, since she's the big plot device and enigma at the heart of Steven Moffat's current run on WHO. "Silence in the Library" and "Forest of the Dead" introduced River Song to the show. River and The Doctor's love story running in conflicting timelines is lifted right out of Audrey Niffenegger's bestseller novel THE TIME TRAVELLER'S WIFE, and by the time we reach this season's midpoint "A Good Man Goes to War", the novel's influence is even more explicit than ever. The original novel is about a woman whose husband is constantly displaced in Time, so he keeps turning up at a different point in his timeline while she experiences Time in the normal linear fashion. In DOCTOR WHO, The Doctor meets River at the end of her life and proceeds to meet her again and again while going backwards in her lifetime while River meets him earlier and earlier in their time together, so that when she meets him the first time as an adult, it's likely to be the last time he meets her. In the novel, the husband meets the heroine early in her childhood, just as The Doctor is instrumental in River's conception and birth, and even how her childhood turns out, since WHO adds things not in Audrey Niffenegger's novel, like lots of aliens, battles and explosions. Guess which is rather more entertaining.

And there's more. We know Steven Moffat is a comics reader, so the saga of the child conceived in the Tardis who gets snatched away and trained to become a weapon in adulthood before The Doctor meets her again seems to be directly lifted from the CABLE storyline from the X-MEN comics, which are already themselves stuffed full of contradictory and convoluted time travel paradoxes. If there's any drawback to this, it's that DOCTOR WHO is now in danger of being so caught up in its own continuity that it threatens to disappear up itself in the same way that X-MEN comics become by the late 1990s. That's when a series becomes decadent and less accessible to newer viewers. We'll see if that comes to pass. 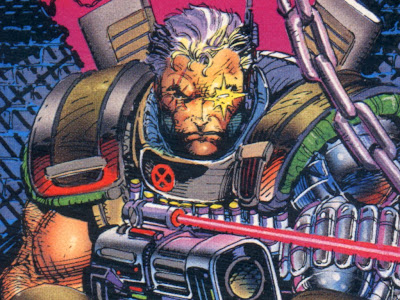 Looking at shiny creative baubles like a magpie at lookitmoves@gmail.com