Cowboy Bebop is now officially streaming on Netflix but ahead of its release, we spent this past weekend binge-watching the new Netflix live-action adaptation in full. As a beloved cult classic anime, there's a built-in pressure to approach the franchise at all – but as many previous anime adaptations have struggled, there's an even bigger pressure that comes with highly critical anime "purists" about any form of production. Despite these sometimes unjust preconceived challenges and obvious obstacles, Netflix's Cowboy Bebop is hands down the best live-action adaptation thus far.

In this new version of the iconic series, Netflix condenses several stories from previous Bebop lore into its DNA, sometimes giving a shot-for-shot replication of events. As depicted in the trailer, there are some crucial recreated moments that are the emotional core of the new series but isn't afraid to then transition in the next scene to flip the script on expectations a longtime fan might have.

With the new Cowboy Bebop, these alterations never have to come at the expense of another story. There isn't an entire episode that significantly feels like a negative choice in terms of these deviations, and its ability to facilitate a balance between being original and respectful is far superior to other anime projects – but even notable superhero films that have been widely inflated just for the label of being a Marvel or DC title.

The core trio in the new adaptation of Cowboy Bebop each represents that duality of source-material reference and modernization, bringing key aspects of the original Spike, Jet, and Faye. The three actors in the primary roles, (John Cho, Mustafa Shakir, and Daniella Pineda respectively) have done their research in the anime material they were working with, and boldly take chances to cast light on unpredictable (but in retrospect, fitting) ideas that can be viewed as expansion, or alternative incarnations.

Cho's demeanor as Spike feels so natural and effortless that it becomes nearly impossible to imagine anyone else taking on the iconic bounty hunter. The actor portrays deep-rooted qualities that have remained ingrained in Spike's essence but he's also able to showcase his interpretation of various consequential times throughout the character's complicated existence. Cho's tour de force performance gets a chance to blossom even further when met with the sheer determination of Shakir's Jet Black.

The duo's remarkable talent at making anime characters feels so tangible is a major reason that every twist and turn works so well – leading to the all-important introduction of Pineda's Faye Valentine. Pineda comes into the series with some of the most memorable comedic ties to Cowboy Bebop, which makes her ability to then give viewers that equal importance in a genuine and heartfelt scene makes this interpretation even more impressive. To many, Faye might feel like the most modified character from the anime, but the series' self-awareness of certain necessary limitations provides some of its more impressive triumphs.

Others like Julia (Elena Satine) and Vicious (Alex Hassell) are major inclusions to this story as well, also slightly altering the pace from what fans have come to know. The Netflix series provides a new opportunity to dive deeper into these characters' thought processes, actions, and backstories, making their inclusion on par with the trio that originally led the anime. Satine and Hassell's shared scenes are that of excellence for both writing and performance, opting for another example of the power of expansion within the new Cowboy Bebop.

All things considered, the tone of Cowboy Bebop is arguably one of the biggest assets to come out of the anime, and in live-action form, is an equally unique experience to undergo. While one title is impossible to compare it to, Cowboy Bebop has fragments of cult classics like Kill Bill, Kung Fu Hustle, and the world of Star Wars, with a niche love for noir. Cowboy Bebop is definitely a title that requires viewers to let their guard down and embark on a zany journey of every emotion imaginable, and much like its source material, it will have a devoted audience that appreciates it for years to come – far beyond its 2071 neon backdrop.

Cowboy Bebop Season 1 is now available to binge-watch on Netflix. 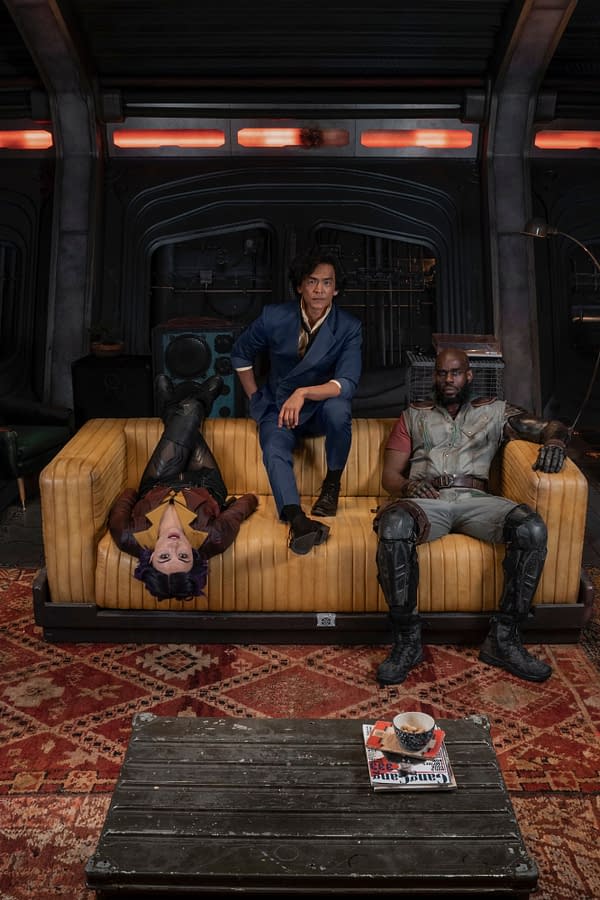 Review by Aedan Juvet
9/10
Netflix’s Cowboy Bebop embraces its iconic source material, building a unique neon-noir world with new unconventional interpretations of beloved genres. Because of its strong cast, incomparable energy, and devotion to forging its own path, Cowboy Bebop is easily the best live-action anime adaption yet – establishing hope for the future.

Anya Taylor-Joy recently reflected on her experiences filming the Mad Max prequel movie Furiosa and says it is her bloodiest title to date.

Both Jamie Lee Curtis and Lindsay Lohan are actively pursuing a Freaky Friday Sequel, and Curtis has finally offered a hopeful update.

Constantine Director Has One Mandatory Change for the Sequel Film

With the release of Black Panther: Wakanda Forever and The Guardians of the Galaxy Holiday Special, we have an MCU viewing timeline update.