During the freshman year run of NBC's New Amsterdam, Max Goodwin's (Ryan Eggold) road to recovery has been rocky, to say the least. He's been quite temperamental over the last few episodes. At first, we don't understand why he's uncharacteristically negative and lashing out at respected colleagues. Then we learn that his aggressive chemo treatment isn't working. He is suffering the consequences without reaping any of the benefits. Changes abound for Max and other members of the Dam Fam as they learn more about themselves and the methods they implement in their work.

Despite doing everything right, Dr. Reynolds (Jacko Sims) loses his patient after valiantly fighting to save her life in surgery. Every death stings, but this time an entire police force is let down by the loss of one of their own. New Amsterdam goes to great lengths to make sure they didn't miss something and Max oversteps during their very public review.

Max has never behaved with such aggression and hostility before. Other doctors and all evidence support Reynolds, yet Max continues berating his friend and digging for answers they already have. We don't blame Reynolds for snapping back and wanting to leave. This is not what he signed up for. However, we discover that Max is projecting personal difficulties onto his work life.

The rigorous treatment is not working, so our super optimistic doc is in despair. The cop's death reminds Max of his own mortality and he wants to find a way to prevent the inevitable. Surely there is a reason for such loss. But that is not so. Sometimes you can do all the right things and still lose a patient.

Reynolds understandingly forgives his friend and is able to more forward, but Max has some soul-searching to do. Interestingly, he isn't the only New Amsterdam doctor in need of reassessment. Our beloved Iggy (Tyler Labine) ends up in hot water when his earnest affection for patients is misread and presented for scrutinous evaluation.

I freaked out a bit over Iggy's storyline over the last two episodes. He was accused of inappropriate behavior and his job was in jeopardy. We love Iggy for being a sweet teddy bear ready to give hugs and lend a helping hand. He's close with his young patients and dear colleagues, but it has never been in a creepy way. But when his actions come into question, they make him sound like a Law & Order: SVU suspect.

Iggy worked on connecting with hopeless Avi (Elijah Richardson) and when they finally make a breakthrough, he gets into trouble for becoming unprofessionally close with his patient. Now, Sharpe (Freema Agyeman) and social worker Tiara (Johanna Day) are investigating his behavior. They uncomfortably question Avi about Iggy's behavior – did he ever touch him inappropriately? We all know Iggy is a hugger. Leave him be! Avi clams up for a moment and then drops a bombshell. Iggy never made a wrong move. His physical contact was always reassuring, comforting and loving. But Avi was molested – by his aunt. Yikes!

Avi's confession makes Iggy reassess his life's work. He's succeeded in connecting with and caring for his patients, but he hasn't really helped them – not the way he should have. THey only feel comfortable with Iggy. He didn't give them the tools to cope and feel comfortable sharing their feelings with others. Instead, Iggy became their go-to guy.

Awww poor Iggy! This is why we love him so.

Max has pushed himself to the limit and then some. Even when his grueling treatment drains every bit of his energy and morale, he continues fighting for his hospital and patients – to a fault. His desire to promote New Amsterdam's charitable services is admirable, his determination to personally see everything through is inspiring, and his genuine concern is always refreshing. Max's motto is "How can I help?" But this time, he is the one who needs help. Despite his resistance, Sharpe steps it up and his friend and doctor.

After resigning herself as his physician and staying in the friend-zone, Sharpe has had a change of heart. Her colleague is putting Max's life in danger. The chemo and radiation is too severe. That's tolerable if it helps cure his cancer, but it is not. Sharpe resumes responsibility as Max's doctor and stops his treatment immediately. He needs to rest and heal – at home.

[On a superficial aside, I must note that Eggold's appearance has only made him look healthier over time. His locks are more lucious, that beard shows no sign of shedding, the beanie is hiding a thing and he is actually packing on muscle for a guy who is supposedly dipping all meals. But I digress…]

Sharpe gives him a practical pep-talk. If he wants to be there for his family, he needs to go home and recoup before his baby girl enters this world. The Dam Fam has the hospital covered. With that, he's ushered into a cab and sent off.

Meanwhile, Bloom (Janet Montgomery) is fresh out of rehab and has come to tell Max that she's quitting her job. When she learns he isn't at the hospital, she decides to make a house call. That's when we're hit with an unexpected blow…

Max answers the door covered in blood. WHAT?!?

The finale promo reveals that Max will face a gut-wrenching dilemma – Will he save his baby or his wife? Or can he miraculously save them both???

If the teaser has me this rattled, I can't even imagine how intense the whole hour is going to be!

Tune in and cry with me this Tuesday at 10 p.m. EST on NBC when New Amsterdam wraps up its freshman season… but don't forget! 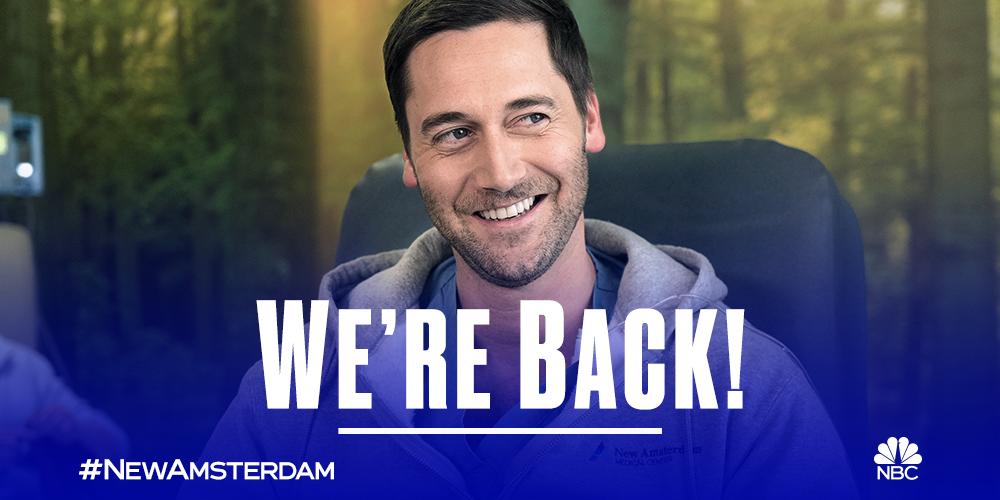 The Masked Singer: Looking Back on Season 3, Thoughts on Season 4

With the masks off and our winner revealed, we take a look back on the third season of FOX's The Masked Singer and a look ahead to season 4.

The Masked Singer Season 3 Review: Strike Three and Rhino's Out

The Masked Singer Season 3 Review: In Space, No One Can Hear You Lose

As The Masked Singer inches closer to the grand finale, here’s a detailed recap of the clues and performances that still have us guessing.

FOX’s The Masked Singer selected our Top Six contestants after sending two celebs home in the Face-Offs. Here's our take on how it went down.

How The CW's Supernatural Production Pause Could Help Its Final Run

As distraught as Supernatural fans are over production delays on the final season, here's a look at how it could actually help the series.