Hey gang!  The Bron Breakker era of NXT has begun!  The new NXT Champion finally defeated rival Tommaso Ciampa for the title in last week's main event and now we will see what his plans are on his first night as the brand's top Champion.  Who wants the first shot at the new Champ?  Who does the Champ himself want to face?  These are questions we hope to have answered here, so let's get to the show and see if they do.

We kick things off here with the new NXT Champion, Bron Breakker hitting the ring.

Breakker grabs a mic and pays respect to former Champion Tommaso Ciampa, before declaring that he will be a fighting Champion that will set the example for everyone else.

A short, but impactful promo from Breakker here.

A pretty solid match here.  I mean, let's be clear, Escobar is one of those guys that's incapable of having a bad match and Quinn keeps getting better as well, so this was fun.  Eventually, Elektra Lopez uses Quinn's affection towards her against him when she nails him with a low blow, allowing Escobar to hit the Fantom Driver for the pinfall.  And with that, Legado del Fantasma stays whole.

Next, we get a taped promo from Tony D'Angelo hyping up his Crowbar On A Pole Match against Pete Dunne later tonight.

We then get a video package of NXT Women's Champion Mandy Rose doing a bikini photoshoot.  I'm sure next week we'll get the same thing with Bron Breakker, right?

We see Malcolm Bivens standing by the stage scouting the match.

This is the NXT debut of Damon Kemp here.  His real name is Bobby Steveson and he's the brother of Olympic Gold Medalist and future WWE star Gable Steveson, though it appears by giving him a different name, the plan is to keep them apart as much as possible.  Kemp was a successful collegiate wrestler himself at him and his brother's alma mater, the University of Minnesota and that shows here as his in-ring style is very technical with a lot of amateur wrestling takedowns and grapples.

Newcomer @damonkempwwe is taking it to @CGrimesWWE. Will he be able to score the upset? #WWENXT pic.twitter.com/YgakajAWmr

Grimes puts him away in a couple of minutes though, finishing him off with the Cave-In for the pinfall.

Kemp didn't look bad here at all though and it's easy to see him fitting into the Diamond Mine faction with his background.

We now go to a video promo from Joe Gacy and Harland setting up their match next in the play-in round of the Dusty Rhodes Tag Team Classic.

Next, we learn that Von Wagner has been fined and suspended after his actions last week.

This match was terrible.  A sloppy, uncoordinated mess with a lot of awkward pauses and botched spots.  Eventually, Harland gets in and just goes apeshit on everyone, leading to a disqualification.

We next get a video package for Imperium, where Walter speaks about their ideals, their work ethic, and criticizes Americans.

Pete Dunne vs Tony D'Angelo – Crowbar On A Pole Match

Stupid gimmick aside, the match is a pretty good one.  Both guys bring some non-stop intensity here and it's a hard-hitting suplex showcase throughout.

So instead of the classic "On A Pole" match rules where someone has to climb up and retrieve the item on the pole, here it's merely a holding place for the crowbar and once someone grabs it down, it's legal to use for the remainder of the match.  D'Angelo does just that and they do some well-timed defensive stuff where they trade-off the crowbar and avoid the swings from the other.

Dunne attempts to choke D'Angelo with the crowbar, but Tony D reverses and does a spinning Neckbreaker with the crowbar around Dunne's neck.  They battle on for a bit more and use the crowbar in some fun ways against each other, but it all comes to a crashing end when D'Angelo straight up bashes Dunne with the crowbar to knock him out and get the pinfall.

We then go to a backstage interview with Grayson Waller, who says he will be the main event star of NXT 2.0 and WWE after beating AJ Styles tonight.

We get a Toxic Attraction video now, which is basically just a continuation of the Mandy Rose video from earlier, as it ends with her again doing a bikini photoshoot, this time in a studio.

I feel bad for Hartwell, Pirotta, Catanzaro, and Carter here cause they are the only ones trying to actually wrestle here and know what they're doing.  Miller is "greener than goose shit" as good ol' Jim Ross would say and literally everything she does here, she looks like she's about to break her neck, including a suicide dive through the ropes early on where I was sure as hell convinced she had just done it.

STOP.  DOING.  THAT.  SHIT.  If you can barely wrestle, why are you doing dives and nonsense that even some seasoned veterans won't do because they know their limits and won't risk their necks for it?  Just awful.

The ultimate crime of the NXT 2.0 era (and Jim Cornette speaks about it often on his podcasts) is they're completely exposing young, inexperienced people on big TV and making them look like idiots.  Who cares if they have "the look"?  If they can't wrestle yet, why are you putting them out there?  Someone is going to get very badly hurt here before too long and the dumbasses running this show are just going to stand there throwing their hands up and won't answer for it when they should be held completely liable for it.  You don't send a guy who just took flying lessons out to pilot a big passenger jet.  Same idea.

And then there's the Wendy Choo nonsense, which even if this were a ring filled with five Hall of Famers, would completely undercut the entire goddamn thing.  You have a person wearing onesie pajamas sleeping on a pillow on the ring apron.  How in the hell is anyone supposed to take this shit seriously?  I'm done.  This match isn't worth discussing.

Next, we see MSK freaking out when they see the Dusty Cup backstage.

We next see Solo Sikoa getting ready for his match against Boa tonight.

Then we go to Kay Lee Ray wandering onto the set where Mandy Rose was doing her photoshoot.  She destroys the set, getting pissed that Rose has time for that, but not for defending her title.

This is kind of an odd one.  They beat the hell out of each other in the ring, make their way to ringside, and keep fighting, where they get counted out.

After the bell, they keep fighting all the way to the backstage area, where they start hitting each other with weapons and whatnot.  Eventually, Boa shoots a fireball in Sikoa's face, which brings the whole brawl to an end.  The brawling is fun and all visually I guess, but there's just no real emotion behind this whole "feud".  There's nothing personal and no stakes, it really feels like they put two random dudes together and said "go beat each other up every week!".

AJ Styles does a backstage interview now where he says he's going to teach Grayson Waller a lesson and ride that success into the Royal Rumble.

We now see the NXT North American Champion Carmelo Hayes and Trick Williams arrive in a Bentley, before heading into the arena.

They head to the ring and mock Roderick Strong before Hayes brags and celebrates himself in some really good heel work.

As they head back out to the car, they find out that Cameron Grimes has the keys and he tells Hayes he's coming for his title.

It's main event time and finally, after weeks of build, Styles gets his hands on Waller in a match.

Waller plays the aggravating, cowardly heel very well here, often ducking into the ropes and running away to avoid any action, all while taunting and yelling at Styles.

They have a very nice back and forth match here, playing to the crowd with their very firmly established heel and face roles.  They both lay in some heavy offense and get some near-falls as the match progresses, but eventually, the veteran Styles is too much and hits Waller with the Phenomenal Forearm for the pinfall and the win.

After, Styles grabs a mic and brings out a returning LA Knight to get revenge on Waller.  Knight beats the hell out of Waller in and around the ring and celebrates in the ring with Styles as NXT 2.0 ends.

Alright, so that was a mostly solid night of wrestling for NXT 2.0.  Like whenever the brand (or wrestling in general) is at its best, they keep the comedy and nonsense to a minimum and focus on good matches.  Of course, there were some hiccups in the second hour and a disastrous women's tag match, but overall, it wasn't a bad show and the main event was a good capper on everything. 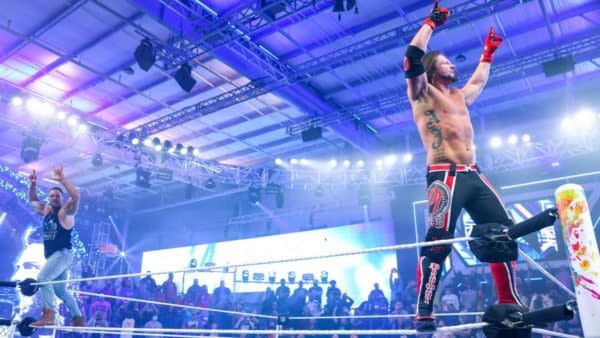 Review by Ryan Fassett
6.5/10
Some good matches throughout, minimal comedy and schtick, and a really solid main event and ending segment made this an overall pretty good episode. It wasn't perfect, especially in the second hour when a truly awful Six-Woman Tag Match almost derailed the whole show, but it picked itself up and rallied strongly to the end.