Hey gang!  The NXT brand has been going through a serious facelift over the past few months as it transitions further and further into NXT 2.0.  While there are new faces on the show and the overall presentation is quite different, the one constant that carried over from the "Black and Gold Era" is veteran Tommaso Ciampa being a dominant Champion that all others are measured against.  That may change here at NXT New Year's Evil, where he will defend the NXT title against a young star who seems earmarked to be a major figure in WWE for years to come in Bron Breakker.  Can Ciampa hold off the young powerhouse?  Let's find out.

We learn from the pre-match announcements that the Cruiserweight title will be absorbed into the North American title, so that should answer any questions about whether they will be bringing in a new title or not.

Right off the bat, this is your match of the night here at New Year's Evil.  The intensity, the trash-talking throughout, these two guys brought it here and matched each other shot for shot with some really spectacular action.

The way these guys navigated the changes in speed throughout and changed the genre from chain wrestling to brawling to submissions to grappling to high-risk was just great and it kept the audience on their toes the whole time.

Who will walk out of #NXTNYE as #WWENXT North American Champion? pic.twitter.com/ccFn3u353b

By changing things up so often, the crowd never had a lull to lose attention or excitement.

After 20 minutes of intense back and forth action, Hayes hits the top rope Axe Kick to Strong for the pinfall to become the new Unified NXT North American Champion.

Next, we go to the locker room earlier in the day, where Raw star AJ Styles meets up with NXT Champion Tommaso Ciampa to discuss their respective matches tonight.

So Styles hits the ring here ready for action and grabs a mic as he is met with a big prolonged "AJ STYLES" chant from the crowd.

Styles says he started his WWE career on the main stage, but kind of regrets not starting down in NXT because there's something special about it.

He then turns his attention to Grayson Waller and as he's beginning to speak about him, Waller heads out and mocks Styles and the crowd.  He lays into Styles for losing to Omos on Raw on Monday night and takes credit for it, saying he was in Styles' head.

Styles agrees and says Waller should take advantage of it by fighting him tonight.  Waller hops into the ring, but then says he won't face him tonight because it's not the main event and he deserves the spotlight, so he'll face him on NXT 2.0 next week.  They start fighting then and as Styles starts to take over, Waller ducks out and runs away.

So we don't get the advertised match tonight, but we're getting it next week.  I have to assume this was a time issue and they overbooked tonight's show.

Next, we have the pissed-off and hurt Pete Dunne proclaiming he will get revenge on Tony D'Angelo for injuring his hand and challenges him to a match next week.

We then go to the gym, where we're forced to watch an absolutely dreadful segment with different teams arguing over who will be the next NXT Women's Tag Team Champions and this somehow results in a Six-Woman Tag Match next week with Indi Hartwell, Persia Pirotta & Wendy Choo facing Kayden Carter, Kacy Catanzaro, & Amari Miller.

It's Walter's return to the ring for the first time since losing the NXT UK title to Ilja Dragunov at NXT TakeOver 36 this past August.

A pretty fun, fast-paced tag match here.  Everyone gets their moments to shine and no one looks bad at the end.  Walter continues to be one of the most believable threats in all of WWE.  You just see the guy's power and feel his presence and you immediately buy into it.  Fabian Aichner also has a very strong showing here, following up his show-stealing performance at NXT WarGames.

What I didn't like here was Riddle's continuous manhandling of Walter throughout.  That just doesn't track and it didn't sit right with me.  Also strange is how MSK is basically useless throughout the match.  Riddle handles all of the heavy-lifting here, with his partners largely getting beaten on or thrown out of the ring.

It was a fun enough match from an action standpoint though and Riddle eventually gets the pinfall after an RKO on Barthel.

We now go to a backstage interview with Joe Gacy and Harland, where Gacy implies that they will be entering the Dusty Cup tournament.

Next, we get a really silly video of NXT Women's Champion Mandy Rose arriving at New Year's Evil in a helicopter.

We then go to a backstage interview with Elektra Lopez, where she says that next week on NXT 2.0, Santos Escobar will face Xyon Quinn and she will go with the winner of the match.  Not the most progressive match stipulation there, treating a woman as property.

Gonzalez comes out on her silly motorcycle with the laughable front attachment again.  It's highly noticeable she's not evening driving the bike out like The Undertaker used to, but instead has the damn thing in neutral and is just pushing it along with her feet, doing a really bad impression of what a motorcycle would be like on The Flintstones.  The crowd is booing her and these sad continuous attempts to make her look "tough" and cool are just awful and outdated.

So once they put Gonzalez's Pow-Pow-Powerwheels toy away, these three put on the only clunker of New Year's Evil.  There's no real veteran in the ring here to drive the action, so instead, we get a lot of sloppy spots and a lot of rushing through things.  None of the action here has any feeling to it and no one is selling with their facial expressions.  There's also a lot of standing there and waiting for your opponent to do something to you, which is the most obvious example of how green everyone in this match is, especially Jade, who looks completely lost at times.

At one point, they try a spot where Gonzalez puts both of them on her shoulders for a double Samoan Drop, but instead of getting any real lift or impact on the move, she kind of just falls down on her ass.

The ending is a whole mess, where Jade pushes Gonzalez off of the top turnbuckle to the outside (in a really ugly-looking spill where Gonzalez very nearly got her neck tied in the middle turnbuckle) and then as Jade attempts to pin Rose, Rose instead just kneels on her chest to pin her.

We next get a video of Boa where he has it out with the evil spirit in him and they literally do the horrible WCW thing where Hollywood Hogan saw Ultimate Warrior in the mirror.

From there, we head outside to the parking lot, where Riddle and MSK celebrate their victory.  Riddle bids them farewell and then they are confronted by The Creed Brothers, who tell them they won't get through them in the Dusty Cup tournament.

We now get Andre Chase heading to the ring, where he announces he's awarding a full scholarship to Andre Chase University to the Thor-looking idiot who tried to protect him last week.  This brings out Von Wagner, who cuts another brutal promo (dear god, why aren't they keeping this guy off the mic?!)

He beats up Chase in the ring before heading into the crowd to beat up Chase's student and some fans.

You know, if they didn't have stupid segments like this and the backstage stuff, they probably could have fit Waller vs Styles onto the show tonight.  Anyway…

We now get a video package of Cameron Grimes celebrating his successes in 2021 and what he's looking forward to in 2022.

Breakker has an elaborate entrance here, with him breaking chains around his wrists before smashing through the old NXT symbol on the ramp.

The match itself is a very good one.  It's a fun heavyweight slugfest with both men bringing the intensity and unleashing some fun offense on each other.

Things escalate the longer it goes, with Ciampa getting busted open above the eyebrow.  They hit each other with harder and harder moves, with each man kicking out or whatever their opponent throws at them.  They wind up out at ringside and Ciampa pulls back the outside mat to try and Piledrive Breakker onto the concrete.  Breakker counters this and Alabama Slams Ciampa through the announce table.

He drags Ciampa back into the ring for the Gorilla Press Slam and the pin attempt, but Ciampa grabs the rope to escape.  Ciampa gives him everything he's got now, repeatedly kneeing him in the head with his exposed knee.  He then hits the Fairytale Ending, but Breakker kicks out at two, shocking Ciampa.

Ciampa tries a Superplex in the corner, but Breakker reverses into a turnbuckle Bulldog and then locks in the Steiner Recliner on Ciampa, to which Ciampa eventually taps out to.  Bron Breakker is the new NXT Champion!

Breakker celebrates in the ring with his new title as NXT New Year's Evil ends.

And that's that for New Year's Evil, an overall fun event that like anything in the NXT 2.0 era could have done without the silliness and backstage nonsense.  But the matches were good (except for the Women's title match) and it ended with a very good main event. 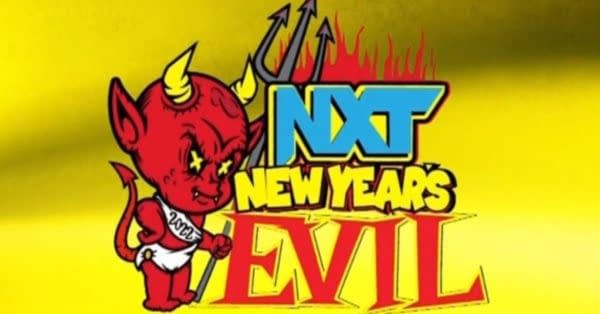 Review by Ryan Fassett
7/10
The focus was clearly on the wrestling matches here and they didn't disappoint. While there were some unnecessary segments and the Women's title match wasn't very good, the other matches lifted the weight and provided some really fun action.