It's the biggest show of the year for NXT on WrestleMania weekend, NXT Stand & Deliver.  All of the titles in NXT will be on the line this afternoon in Dallas as the WWE stars of tomorrow get the matinee spotlight today.  Enough out of me, let's get to the action!

So this was a solid tag match up until the end when they felt the need to sully everything by having Wendy Choo show up and throw orange soda in Gigi Dolin's face, taking her out of the match and distracting Jacy Jayne, which allows the challengers to get the upper hand and Raquel Gonzalez puts her away with a Chingona Bomb for the pinfall to win the titles.  There was no need for the silly interference.

A fun match here.  It's a Ladder Match, so of course, it's spot-heavy, but my one complaint would be that everything was a bit too one-on-one and not enough chaotic action with everyone going at it all at once.  There are some great visuals here, including a great spot where Escobar Sunset Flips Sikoa off the top of a ladder and onto a ladder leaning in the corner.

Legado del Fantasma, Sanga, and Trick Williams all get involved and have some nice spots as well, especially when William is dumped off of the big ladder all the way to the outside and onto everyone else.

The big spot of the match doesn't look like it went smoothly, as Waller has Hayes and Grimes laid across two ladders on the apron and does a big leaping elbow from the top of the big ladder, but both guys move and Waller takes the entire impact on his arm.  He's screaming pretty loud at ringside as refs work on him.  It didn't look good.

Eventually, Grimes hits a big top rope Cave-In on Escobar and climbs the ladder to grab the belt to fulfill his promise to his late father and become Champion.

Ciampa starts things off with poses that separately pay homage to Triple H and Shawn Michaels respectively.  From there it's a pretty intense slugfest between the two.  Lots of good back and forth action and reversals throughout and a real feeling from both men that they're desperate to win this.  They kick out of each other's finishers, but not in a lazy no-sell way.  The way they do it really sells this feeling with each that maybe they can't beat the other man.

Eventually, D'Angelo DDTs Ciampa on the exposed concrete floor outside the ring and then gets him inside to kick him in the head for the pinfall.  Always gotta go out on your back.

After the match, the crowd shows Ciampa respect with a standing ovation and a big "Thank You Ciampa!" chant.  As Ciampa is exiting, Triple H comes out to the stage and salutes Ciampa, and hugs him.

A good one here with each team bringing their best today.  I have to single out Aichner though, he's just so good.  He does the impressive big strength moves but also all of these little things that just look flawless.  Hopefully, WWE realizes how good he is and makes him a big star soon.

Everyone else shows up here too though and each team has their moments to shine on the big stage.  It's a nice blend of talents actually, with Imperium bringing the technical skills, The Creed Brothers the powerhouses, and MSK the fast high-flyers.  It all works pretty well together and helps create a nice fluctuating speed throughout.

There's a great visual where everyone is fighting at ringside and the big Brutus Creed goes to the top turnbuckle and does a huge Cannonball to everyone on the outside.

Eventually, Barthel is hit with a double team of a top rope Hurricanrana into a Sit-down Powerbomb for the pinfall by MSK to win the titles.

Next, we get a weird as hell promo from Joe Gacy and Harland at Dealey Plaza in Dallas, where they use the assassination of JFK to make some point.  This was dumb.

There's a slightly new belt being used here today, as the black strap has been replaced with a white one.  Cause you know, they're women so they need a lighter color…

Rose and Jade are very much the dead weight in this one and the only exciting parts involved Ray and Shirai.

Eventually, Shirai hits a diving top rope Moonsault on Jade, but Rose runs in and hits her with the running knee to the face to get the pinfall to retain.

We now go backstage to see who the fans voted as the best couple between Indi Hartwell & Dexter Lumis and Persia Pirotta & Duke Hudson.  The vote goes to Hartwell & Lumis and they start fighting.  This has been a truly awful storyline and this was a true waste of time on this show.  Ugh.

Very good match here!  Gritty and hard-hitting right from the start.  This was a vicious old-school match where every shot hurt and every shot mattered.

After some great back and forth action, eventually, Gunther hits a diving splash on Knight, followed by a big Powerbomb for the pinfall.  Really good stuff!

It's main event time and the NXT title is on the line!  And this one didn't disappoint either.  They're given a lot of time to work and they make the best of it, pacing this out nicely and amping up the excitement the deeper they get.  There are lots of near-falls towards the end and they hook the crowd nicely.  Breakker even shows off some high-flying skills when he hits a vaulting flip over the ropes onto Ziggler and Roode on the outside.

But early on we can see Ziggler remove a turnbuckle pad and that pays off at the end when Breakker looks ready to take it all and gets Ziggler up for the Gorilla Press Slam.  Ziggler rakes his eyes and throws him head-first into the exposed turnbuckle and then follows with a Superkick for the pinfall to retain.

And that's that for NXT Stand & Deliver and it wasn't bad.  It was a fun show with some good matches, but no instant classics or anything.  Still, a decent afternoon of wrestling and a nice effort from the brand. 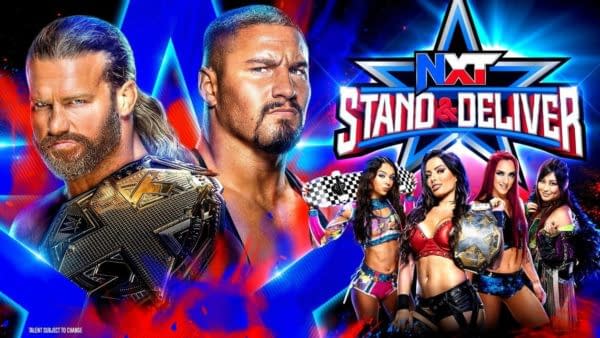 Review by Ryan Fassett
7/10
A pretty decent show for the NXT brand here on WrestleMania weekend. While nothing unforgettable happened, the matches were solid and they stayed pretty focused on wrestling action, which is always a plus for the brand.

Doctor Who Showrunner Russell T. Davies covered a lot of ground in a recent interview, including "Star Trek" influencing his return & more.

Cowboy Bebop co-creator Shinichiro Watanabe says the Netflix series isn't the anime, though he didn't watch past the opening scene.

Checking in with Stephen Colbert, Ted Lasso star Brett Goldstein was asked about the show's future: “I would happily play Roy Kent forever.”