HBO's The Baby went on a hectic yet brutally honest journey through the ways motherhood or desire of motherhood can be represented around all of us. The recent third episode of the limited series brought some surprise reunions and introduced an important character. Fair warning ahead of time, plenty of spoilers for the episode will be discussed after the image break…

A lot was touched upon in this episode of The Baby, such as introducing Natasha's sister Bobbi, in the midst of the adoption process with her partner, Sam. Also, through attending a get-together at a local playpen/adventure playground, Natasha has a run-in with her friend Mags. This episode revolves a lot around Natasha attempting to navigate getting rid of the baby with the help of Mrs. Eaves who seems to have a deep understanding of the history this baby has with terrorizing other women and about those women's mysterious deaths.

The interactions Natasha had with the environment of the play areas and other mothers were hilarious and all too real if the life and energy are new to you. Mrs. Eaves silently shrieking out towards Natasha when the baby finally fell asleep was similar to an absurd buddy comedy. What was really interesting to witness was good and bad that can come from within circles like the ones Mags is a part of with the other mothers. There's a community and connection there that understands the isolation and loneliness aspect that motherhood can bring, but it also can harbor negative perceptions of anything outside of what motherhood can look like (such as buying the "wrong" items or the best this or that for development). The conversation that ended up happening between Natasha and Mags in the parking lot, after the shockingly funny stroller accident/loss of the bitchy mom's finger, was so important and added so much to the episode.

The Baby showed a wide variety of what motherhood or the journey towards it can look like. It's seen from the responsibilities suddenly thrust upon Natasha, the struggles of isolation and friendship for Mags, and the desire for it from Bobbi and her partner Sam in a slowly progressing society. A lot of good exposition was given during the time between Natasha, Bobbi, and the adoption agent. Revelations of childhood responsibilities and personal ways each deal with anxiety and difficult moments were interesting to see. Before any Natasha and Bobbi scenes, the quick look and introduction to Sam and Bobbi's relationship was not only important but was such a moment of calm in the episode.

The ending of this episode of The Baby is so tense and necessarily done in such a way that it throws a deep obstacle at Natasha. Her struggle between either letting go of the responsibility of the baby, even if that means it dies, and the urge to protect something that is typically defenseless was a human reaction. It seems like the struggle represented the complexities not often taken into account when it comes to the ways we think about motherhood and "womanly responsibilities" when it comes to children. There's a lot more within Natasha, she isn't one example or another and that's what continues to make me excited to watch her journey in The Baby.

A new episode of #TheBabyHBO is streaming tonight on @hbomax. pic.twitter.com/USAC18BkQQ 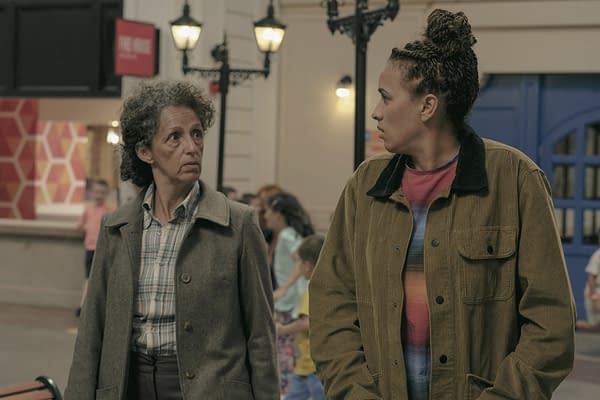 Review by Brittney Bender
8.5/10
HBO's The Baby Episode 3 "The Bulldozer", was a fantastic exploration of Natasha's continuing inner struggle over the child left in her care, and while some portions struggle to best explain Mrs. Eaves to us the episode overall does a good job at continuing the story smoothly.
Credits
Network
HBO