FOX's The Great North surprised me this week as it continued to go to emotional and comedic levels with a loveable story surrounding Wolf & Moon, and one of the laugh-out-loud moments from Honeybee. As per usual, turn back now unless you're ok with spoilers… you have been spoiler-warned! Now here's a look at "Dances with Wolfs Adventure":

The Great North gave us two stories, one featuring Honeybee's struggle with Toby the Eagle/ Councilperson and one featuring Wolf finding out about Moon's attendance of a divorce trauma therapy group at school to get extra ice cream. The personal trauma Beef Tobin had with Toby the Eagle was hilarious, especially the flashback of him debating the bird for the city council seat. Whoever animated that, or made the final decision, to have Toby nod along as he shrieked like he was giving a Ted Talk was so absurd and amazing. So while Honeybee attempts to find a way to get her mitten back, taken by Toby of course, she tries to reason with his owner & fellow council member about it. In the end, she realizes how much Toby means to his handler, Roy (perfectly voiced by Mark Proksch from What We Do In The Shadows). It wasn't the most compelling story but there were moments that reminded me of how much strength is in the writing of The Great North.

On the other side of things, I was happy to see more of Wolf's background and story explored. We get to understand the unnecessary guilt he's carried around involving his mother's affair with someone at the dance company he attended. In a unique twist, we see Moon get Wolf out of his denial and towards accepting that nothing was his fault, he was a kid. It may be a simple message but I think for a lot of kids even if they're adults, divorce can feel like a personal fault when it isn't. The episode overall was fantastic, not the most exciting or my favorite but felt like a ball of comfort that I can appreciate time and time again. I wanna know other thoughts about this episode, so leave any comments letting me know any favorite moments or characters from this episode of The Great North! 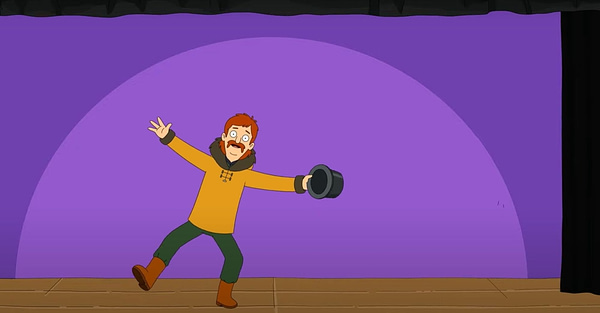 Review by Brittney Bender
8.5/10
FOX's The Great North gave viewers a perfect example of how comedy and emotional maturity can mix so well in an animated series. While not a perfect episode, it still brought plenty of laughs and kept up with the witty humor I've come to love.
Credits
Network
FOX

The Orville: So We're Guessing Seth MacFarlane's Not A Big FOX Fan?

Hulu's The Orville star & series creator Seth MacFarlane had a few more things to say about the show's old two-season home over at FOX.