FOX's The Great North gave us lessons on how to take places and create new memories out of the difficulty of the past in season three's premiere episode. The episode, "A Knife To Remember Adventure," brought back the effortless fun of the Tobin family into our lives with some reminders of our own place in the world compared to what gets us down in the dumps. Some minor spoilers may be ahead, so consider this your fair warning before reading any further…

The Great North had a great mix of stories going on in this episode. Both Beef's journey and the one his kids were having had aspects that blended together really well. The restaurant, Crocodile Rob's, was some amazing and hilarious combination of Outback Steakhouse and The Rainforest Café that I desperately now wish was a real place. The general excitement for a variety of moments and things in life that these characters possess is a vital part of the series, and it's nice to see this continue in such a way going into the third season.

Honeybee's character continues to develop in spectacular ways, and it became evident in this episode of The Great North her role in this family. When she told the kids and Wolfe, "You don't have to feel bad about the things she did," in reference to their mom's past decisions impacting what they decided to enjoy, it became a great point of instant reflection in the episode. What I hope to see explored further when it comes to Beef and his difficulty understanding how to adjust to the Knife Club socially was a further exploration of possible neurodivergence in the Tobin family. It would be great at some point to see boundaries and media stereotypes broken by such a great set of characters who openly discussed ADHD, Autism, mental health, and more. Besides that point, this episode of The Great North was both emotionally impactful and indicative of a grand return to first-rate animated television. 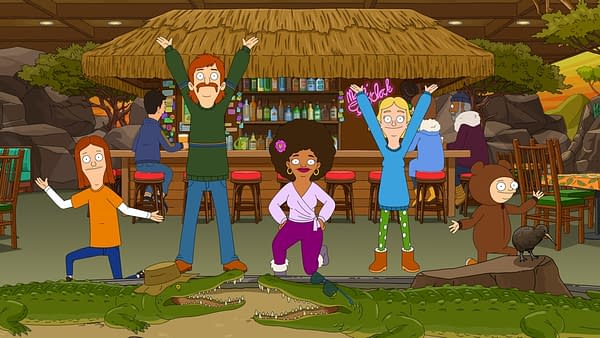 Review by Brittney Bender
9/10
FOX's The Great North S03E01 "A Knife to Remember Adventure" was an emotionally impactful return for the Tobin family. While there is hope for better exploration of neurodivergence in the characters, the episode was indicative of a grand return to first-rate animated television.
Credits
Network
FOX

We've learned that four WWE Hall of Famers will join "HBK" Shawn Michaels in announcing who will be in the NXT Iron Survivor Match.