FOX's The Great North didn't hold back from highlighting some toxic behavior from Judy in their latest episode, "Bee's All That Adventure." Some minor spoilers may be ahead, so consider this your fair warning before reading any further…

The Great North had some excellent representation in this episode and did so in a way that didn't become obvious about it in any sort of way that aimed for praise. Kima Brewper (Ariel Tweto) and her family end up hosting an exchange student from Illinois during the school's "lower-48" student exchange program. There were some great moments as Judy (Jenny Slate), Amelia (Ziwe Fumudoh), and Kima's family sit around the table, and we get to see more about these characters through these scenes. That had to be one of the more enjoyable aspects of the episode. It was also incredibly refreshing to see a series not afraid to have a major character like Judy confronted with her own flaws in such ways.

The Great North got messy with this episode in some ways. At times many moments became incredibly relatable for many who've gone through adolescence and its cringe-inducing timeline of emotions. But at the same time, it became too much to stand as Judy's character went beyond the normal annoyance that ended up being addressed by her friends and Kima's family. Amelia and Kima are great examples of strong friendships. They both gave their all towards Judy and the exchange student/bee-obsessed gal they hosted in Lone Moose.

Another decent portion of the episode involved Ham (Paul Rust) attempting to protect and keep alive a cactus gift from Crispin (Julio Torres). Great father moments continue to come from The Great North as Beef (Nick Offerman) helped Ham rescue the plant from the local garbage dump and reassured his son that his future would include him being a good father and partner. Moments like those continue to be great indicators of the series' talents and ability to navigate potentially complex issues with quick yet sincere efficiency. It wasn't a perfect episode, or really close to the best in this season, but the aspects of representation and navigating topics reminded me of how the imperfect episodes still contain great entertainment value.

I'll re-emerge from the flames in two weeks time. pic.twitter.com/Daonco3goh 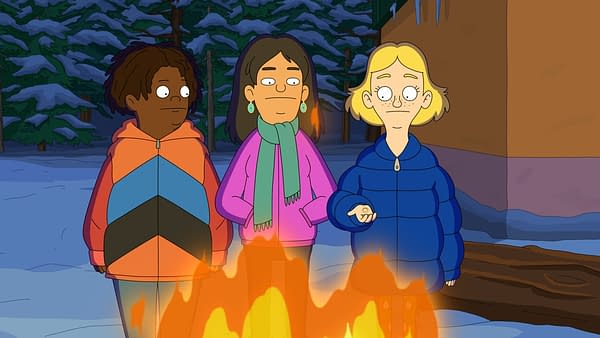 Review by Brittney Bender
7.5/10
FOX's The Great North S03E09 "Bee's All That Adventure" brought representation and depth to the minor characters, making the episode an entertaining journey. Yet, it falls short when it comes to understanding the line between Judy's flaws and her nature of being straight-up annoying or overbearing.
Credits
Network
FOX

This Year's WWE SummerSlam Set for Detroit on August 5th

WWE SummerSlam will take place at Ford Field in Detroit this year, the one-time site of the Battle of the Billionaires featuring Donald Trump at WrestleMania 23.

Making up for the Raw 30 snub, Becky Lynch faced Bayley in a steel cage in the WWE Raw main event, and Lita was there to help Becky win.

The Flash Showrunner/EP Eric Wallace discussed some of the storylines the show would've tackled with Season 10 and beyond.