WWE had fans very interested when they booked the Raw Tag Team Champions RK-Bro to face the SmackDown Tag Team Champions The Usos in a winner takes all match to unify the titles at WrestleMania Backlash.  That match never came to be, as Roman Reigns and Drew McIntyre were inserted into the match to make it into a six-man battle last weekend.  But the interest is still there, not just from fans, but also from RK-Bro, who challenged The Usos to a title unification match again and promised to head to SmackDown this week to get an answer.  How did that go?  Let's take a look.

Randy Orton and Riddle hit the ring to kick off the show and tell everyone how The Usos can't handle anything for themselves and need Roman Reigns to solve their problems.  Orton then demands Reigns head out to face him, but instead, they get Sami Zayn who informs them that nobody wants a Tag Team Championship unification match.  Orton coerces Zayn into setting up a match where he'll face Riddle and if Riddle wins, they get the title unification match, but Zayn tries to chicken out and Adam Pearce comes out to set the match for right now.

A solid, fun match here to kick off the wrestling action this week.  Eventually, Riddle hits the BroDerek for the pinfall.

We then go to The Bloodline's dressing room, where they're lamenting RK-Bro being on SmackDown and what they said.  The Usos say they'll make them sorry.

Shinsuke Nakamura then finds Zayn backstage and mocks him.

SmackDown Women's Champion Ronda Rousey now heads to the ring and cuts a bad promo before issuing an open challenge for her title and she's taken up by former NXT Women's Champion Raquel Rodriguez, who says she'll be making history tonight.

A pretty good match here.  Rodriguez shows off her size and power throughout, leading to some convincing near-falls, and Rousey is able to get some fun counters throughout.  Eventually, Rodriguez gets Rousey up for the Chingona Bomb, but Rousey counters into a roll-up for the pinfall to retain.

After the match, the two shake hands out of respect.  Awww.

So next we go backstage to find Shotzi and Aliyah yelling at Adam Pearce and claiming they were screwed out of a title shot just now.  This was incredibly dumb and pointless.

Madcap Moss now heads out for an in-ring interview, where they show highlights of him beating Happy Corbin at WrestleMania Backlash last weekend before Moss launches into a promo insulting and making fun of Corbin.  As he's naming his career goals going forward, Corbin bashes Moss with a chair from behind.  He then puts Moss' head in the chair, grabs Moss' Andre The Giant trophy, and smashes it on the chair.  Ouch!

A decent enough match here, I'm just personally tired of seeing this group face each other week after week.  There's not a lot of mileage to get out of this match-up and they've done it way too many times.  Natalya tries to lock in the Sharpshooter on Naomi, but it's reversed into an Inside Cradle for the pinfall to retain.

We now find Drew Gulak backstage complaining to Ricochet about his recent problems.  Ricochet inspires him and Gulak says he's going to put Gunther in his place, which doesn't quite happen, as he turns a corner to find the big man, and is promptly chopped down.

A fun very fast-paced match with both guys' talents being highlighted.  Eventually, Sheamus distracts Kofi, which allows Butch to hit the Bitter End on him for the pinfall.

Next, we go backstage to find Sami Zayn trying to kiss up to Paul Heyman and ensure he's still cool with Roman Reigns.  Heyman tells him that Reigns appreciates him.

The Bloodline now heads to the ring and Reigns entertains the idea of The Usos accepting RK-Bro's challenge.  Randy Orton and Riddle then head to the ring and demand an answer, which is a yes for next Friday's SmackDown.  Riddle then knees Reigns in the face and they exit as SmackDown ends.

And that's that for what was actually a half-decent episode of SmackDown this week.  Lots of wrestling action and the stuff that happened outside of that wasn't incredibly stupid or annoying.  And isn't that a nice change of pace? 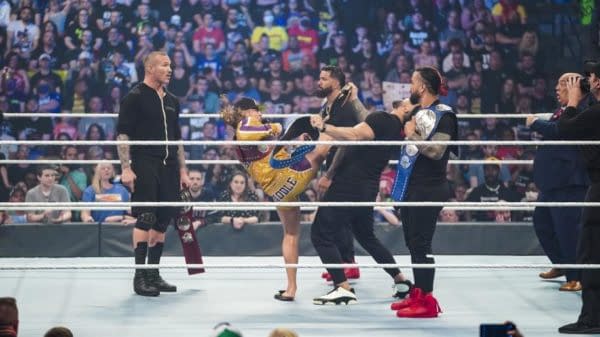 Review by Ryan Fassett
6/10
A decent episode of SmackDown this week, which was anchored by lots of wrestling (and pretty good matches at that) and actual story developments that enticed you to tune in again next week.

WWE Hall of Famer Barry Windham suffered a heart attack over the weekend and is now in an Atlanta ICU fighting for his recovery.

Warner Bros. Discovery Picking Fight with Netflix Over "The Sandman"?

Was the delay in The Sandman renewal part of Warner Bros. Discovery head David Zaslav's frustration with Netflix over WBTV getting paid?

AEW Rampage Preview: 2 Titles on the Line in Action-Packed Card

Tonight's episode of AEW Rampage will feature matches for the Regina de WAVE Championship and the All-Atlantic Championship, plus lots more.

With the series returning for Season 2 on January 15, here's a look at new preview images of the Jeremy Renner-starring Mayor of Kingstown.

AEW Revolution is coming to San Francisco in March, and it's bringing Dynamite and Rampage with it. Tickets are on sale as of today.