In Hulk vs. Thor: Banner Of War, ex-Bleeding Cool writer and comics man of the moment Donny Cates knows why you're here. You're not here for a sweeping epic that changes the status quo of the Marvel Universe. You're here to read big panels of Hulk and Thor punching each other.

The team delivers that. The first pages help uninitiated or lapsed readers catch up, and from there, it's time for the violence. Cates' script calls for a knockoff Adventure Time world, and the art team of artist Martin Coccolo and colorist Matt Wilson dutifully oblige. It's a fun moment of a hyper-cartoony background in front of the more realistic-styled Hulk and Thor. There's what looks like Kirby's hand in the issue too.

Coccolo and Wilson deserve extra praise for working in three different styles in the issue. In a double-page spread, there are background panels of Hulk vs. Thor in a clean traditional comic art style as well as the two aforementioned styles. Letterer Joe Sabino is asked to use many different kinds of word balloons and does so without issue.

Hulk and Thor have both undergone massive changes recently, but one thing remains constant — their heated rivalry! When mysterious circumstances bring them into conflict once more, will the God of Thunder be able to triumph against a Bruce Banner who can now control his rage? Celebrating the 60th Anniversary of both characters, this epic five-part crossover between the THOR and HULK series starts here in this oversized Alpha issue, brought to you by creators Donny Cates and Martin Coccolo! Key mysteries from both series will be revealed, as well as shocking consequences for the future of both characters! (Continued in May's THOR #25 and HULK #7!)

Hulk vs. Thor: Banner Of War 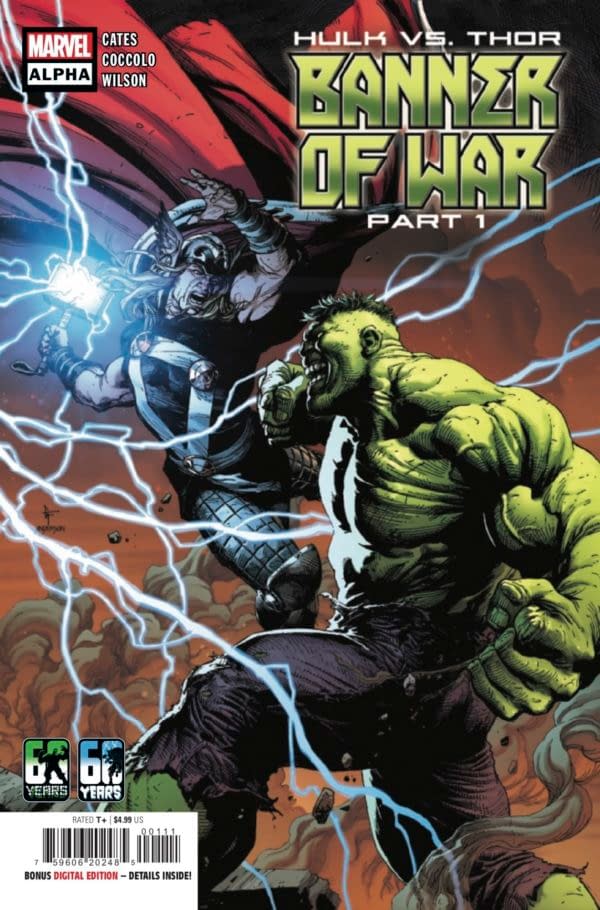