Wonderfully weaving unexplored corners of previous storylines with a very clever story conceit, Death of Doctor Strange: Avengers #1 binds together so many different energies while giving its characters a rare chance to come to an understanding that's not at the edge of their fists.

Starting at the first meeting of a group awkwardly called "The Illuminati," Stephen Strange and Tony Stark introduce a conceptual theme that later pays off with fantastic results. In the modern-day, a group of wacksauce and ultimately unimportant costumed ne'er-do-wells are trying to put a nuclear bomb into a magical portal (unguarded, in part, because Dr. Strange is dead on the job), because of course, that seems like a great idea. However, something's coming out of the portal that wants metal, and it ain't happy. That leads to the Avengers stepping in and needing to learn some things along the way.

The only weird part in this Alex Paknadel script was what looked like T'Challa working with Namor, which is a stretch given the multiple times they've tried to kill each other in recent years. Other than that, the cleverness, the deftness of balancing each Avenger's time on the panel, it's all really well done.

The visual storytelling from Ryan Bodenheim, Rachelle Rosenberg, and Cory Petit takes great care to show some wonderful moments (a reflection in the liquid of a mug, a finger pointing at a colleague, a moment of understanding) with such engaging intimacy that it's wonderful when they nail action scenes like "clamshell protocol" or "no mercy!"

Exploring the really wonderful twist in this plot and how it's discovered would be a spoiler. Suffice it to say, readers of all stripes can find a valuable lesson here about how heroism has to find the right way. That's a quest worthy of Earth's Mightiest Heroes. RATING: BUY.

Death of Doctor Strange: Avengers #1
By Alex Paknadel, Ryan Bodenheim
EARTH'S WEAKEST HEROES! With Doctor Strange gone, the Avengers are the only ones who can stop a rampaging Juggernaut-like monster from wrecking all of Manhattan! But what does this mystical creature want? And how does the magic-skeptical Iron Man hold the answer? 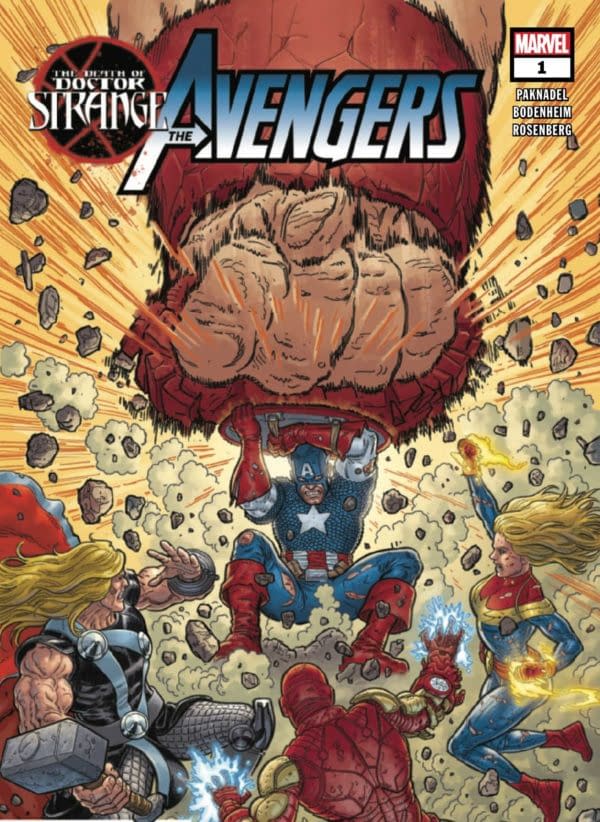 Review by Hannibal Tabu
8/10
Tony Stark is the opposite of a believer. When magical menaces come demanding an iron price, will he find enough faith to divine an answer?
Credits
Editors
Akira Yoshida, Darren Shan, Kat Gregorowicz

A while ago, Bleeding Cool learned that Jonathan Hickman was working on... something, again with Chris Bachelo for Marvel Comics. We didn't know what.

Bleeding Cool has only just reported that Josh Hayes has joined as Boom's Vice President of Sales after more than 15 years at Diamond Comic Distributors,

Boom Studios has announced a number of new hires and promotions within the comic book publisher. Josh Hayes has joined as Boom's Vice President of Sales

Yesterday, when much of the USA has a national holiday, the Penguin Random House website for comic book stores decided they wanted a slice of that action