With a breadth of overwrought melodrama and an unfortunate and exhausting ending, X-Men: The Trial of Magneto #2 does nothing to honor its title or its underlying story, instead of driving all over the road like a drunken motorist at 3 AM. Cliches and pointless action scenes make this a big splashy mess.

Magneto is under suspicion for the murder of Wanda Maximoff in the closing acts of the equally overwrought Hellfire Gala, a huge party held to announce the colonization of Mars and exert mutant diplomatic muscle. Despite the title, there is no trial for the Master of Magnetism — no motions, no representatives, no case. With some very reluctant help, Chuck Xavier is investigating the psyche of his oldest friends, looking for answers.

You might be thinking, "Seems like a trial is putting the cart before the horse, isn't it?" That's not an unfair guess to be discussing even the idea of a trial with an incomplete investigation, but let's skip ahead to the lies. Instead of coming through a gate, the Avengers have flown to Krakoa (instead of coming through a gate, as they did for the Hellfire Gala) to bring back Wanda's body. This was approved for some reason, despite gigantic efforts to keep the concept of mutant resurrection a secret. Where is Wanda's body? Oh, it's where they resurrect mutants, of course. Could the mutants have moved it? Maybe. Did they? Of course not; that would have cut out the overwrought, anxious cover-up scene where Iron Man steps back 30 years in his characterization into some lecherous, almost Pepe Le Pew caricature. Okay.

All of this is without getting to the just plain upsetting ending. This Leah Williams script is wildly problematic here, and while there was a great showing of craft by Lucas Werneck, Edgar Delgado, and Clayton Cowles, the pretty pictures can only do so much. This is not going well. RATING: NO. JUST … NO.

X-Men: The Trial Of Magneto #2
By Leah Williams, Lucas Werneck
HABEAS CORPSES! Heroes of the Marvel Universe came to Krakoa for a memorial. Now they've got a fight. Magneto pushes Krakoa and the Council to the brink! Also there's something wrong with the body …

X-Men: The Trial Of Magneto #2 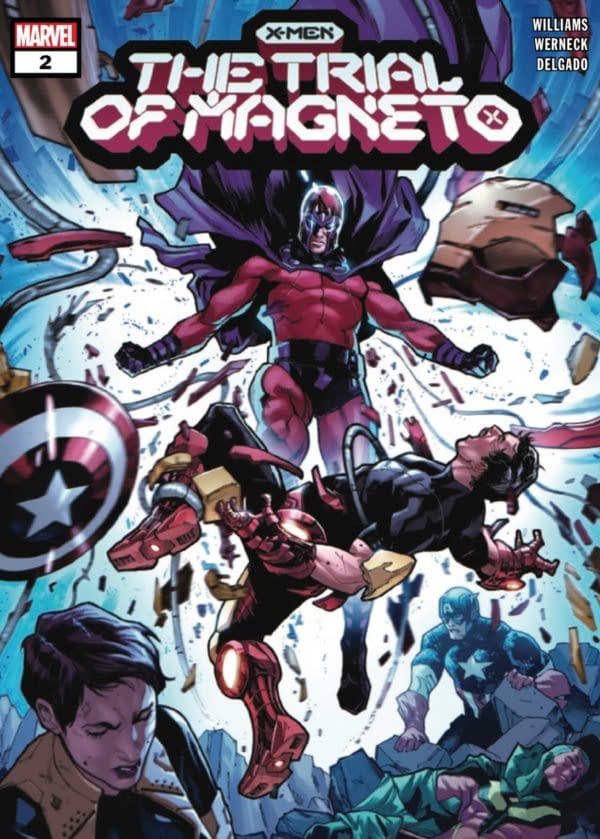 Review by Hannibal Tabu
4/10
Mutants are out of order, Avengers are out of order, and no one seems to be bringing any of these tedious miniseries back in.
Credits
Editors
Akira Yoshida, Jake Thomas, Jordan D. White, Shannon Andrews Ballesteros, Lauren Amaro