If it is incumbent upon a story to fulfill its internal promise, this is the long-nosed Pinocchio of the Marvel lineup. With no crime, no clear investigation, no prosecution, no offered defense, and very little sign of the defendant, X-Men: The Trial of Magneto #4 is a grandiose waste of time, ink, talent, and effort to create … it's hard to say what. Whatever it is, it's exhausting.

The Avengers are visiting Krakoa with the goal of bringing back the dead body of Wanda Maximoff, murdered in the closing moments of the Hellfire Gala. Wanda Maximoff, inconveniently, is not dead in a very big way. Oh, then giant monsters attack the island. There are also variants of Wanda wandering around and being vague. Magneto barely even has any lines in this, much less a role that would justify top billing. It's like Wilrow Hood being listed as the star of Empire Strikes Back.

All of the relentless sturm und drang of this Leah Williams script is intended as some great means of character development for the Scarlet Witch. That goal was wholly unrealized as Wanda learns nothing, experiences no growth, accomplishes nothing. Lucas Werneck, David Messina, Edgar Delgado, and Clayton Cowles did everything they could to develop this as well as possible. It's hard to understand what's supposed to be happening between the title and what happens inside, as the book seems at war not only with clarity and logic but itself.

This trial is more Salem than Krakoa, and a plea bargain won't save this book from the verdict that it should not be purchased under any circumstances. RATING: NO. JUST … NO.

X-Men: The Trial Of Magneto #4
By Leah Williams, Lucas Werneck, David Messina
DOUBLE, DOUBLE TOIL AND TROUBLE! A Wanda divided cannot stand but there are many other things she can do. Chaos comes to Krakoa.

X-Men: The Trial Of Magneto #4 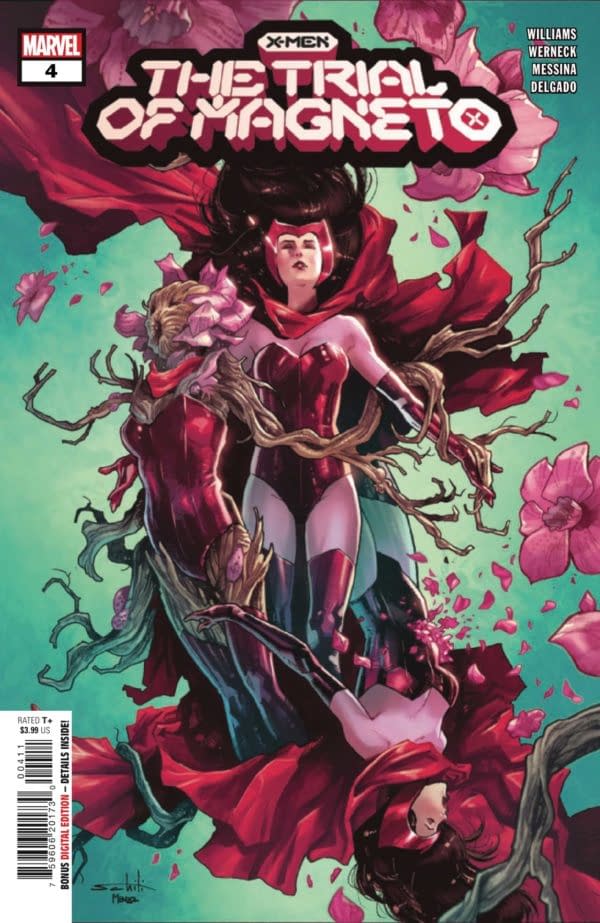 Review by Hannibal Tabu
3/10
When the gavel finally falls on this tedious exercise in time wasting, it will not be Magneto who is found guilty. It will be the title itself.
Credits
Editors
Akira Yoshida, Jordan D. White, Lauren Amaro

The Killer: Affairs of the State #4 Preview: Netflix or Bust

Read this preview of The Killer: Affairs of the State #4 from Matz and Luc Jacamon or you will make Michael Fassbender and Tilda Swinton very sad.

What could be better than reading Love Everlasting, the creator-owned series by Tom King and Elsa Charretier, for free on Substack? How about paying Image for it.

The Changing Face Of Krakoan Resurrection In Today's X-Men Comics

There are rules. Rules are meant to be broken, or at least bent out of shape. Bend them yoo much however and you'll be in The Pit, Welcome to Krakoa

The next volume of the Neon Genesis Evangelion: The Shinji Ikari Raising Project Omnibus is coming to Dark Horse Comics in December.