Shudder's found footage horror-comedy, Deadstream, brings together the fun of a haunted house film and the terror of self-obsessed influencers. While not a perfect movie, this haunted journey brings out the best absurd parts of the spooky season. The film is produced by Joseph and Vanessa Winter, alongside cinematographer Jared Cook and actress Melanie Stone, who also star. The Winters co-edited the film, with Joseph contributing to music for the project as well.

Found Footage And Indie Horror Are A Match Made In Hell

Deadstream follows a disgraced internet personality who attempts to win back his followers by livestreaming one night alone in a haunted house. But when he accidentally pisses off a vengeful spirit, his big comeback event becomes a real-time fight for his life.

Plenty of fun and spontaneous moments are sprinkled throughout this found-footage horror comedy. The main character of Shawn is mostly a fun character to witness going through a process of recognizing and failing to recognize his own egotistical ways as he fights off some truly horrific forces. Some parts of Shawn's personality didn't feel complete. Overall though, the demeanor he had going into the livestream was accurately indicative of the self-absorbed. His character was indicative of the oblivious nature of internet personalities that fail to see the harm in their behavior until it's too late.

The sounds of Deadstream were a great part of the film, mixing some insanely tense moments of silence with the supernatural elements in the haunted house. This only served to truly help make moments of comedy that much better. Shawn's process in both reflection and returning to harmful actions developed a fairly decent plot. The story going into the first half of the film didn't match up with the second half as nicely, but the great comedic moments and well-done jump scares did well with filling in those gaps.

The overall look of the film was average at best, mainly due to how the home was set up and how rooms were used. And while it may have been average in that corner of the film, Deadstream picked up any slack in the fantastic inclusion of ghostly characters that tested Shawn's ability to trust outside forces. Some great laughs and shocking moments came from watching this horror-comedy, making it a truly fun (even through its flaws) movie to add to a spooky season watchlist. 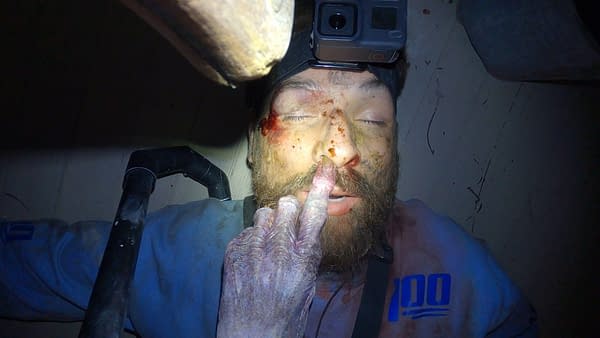 Review by Brittney Bender
7.5/10
Shudder's Deadstream had some great comedic and shocking moments, making it a truly fun yet flawed movie to add to a spooky season watchlist.
Credits
Production
Shudder
Director
Vanessa and Joseph Winter

The Exorcist cast has grown yet again, as Olivia Marcum has joined up. The film will release in theaters on October 13th.

A24, Atomic Monster, Chernin, 21 Laps Team Up For Film The Backrooms

A24 is teaming up with Atomic Monster and others to bring 17 year old Kane Parsons found footage series The Backrooms to theaters.

Knock At The Cabin, 80 For Brady Take Down Avatar At Box Office

Knock At The Cabin and 80 For Brady were able to finally take down Avatar: The Way Of Water at the weekend box office.