Candyman is now available across the board on Digital, 4K Ultra HD, Blu-ray, and DVD, with plenty of successes behind the horror icon's revival. The film amassed a $77 million dollar theatrical run (and topping various VOD rental charts), with writer and director Nia DaCosta becoming the first Black woman to lead a #1 film at the box office.

Because of DaCosta's conceptual choice to merge various thematic elements in this classic horror franchise, there's plenty of opportunities to appreciate the ideas behind the 2021 resurrection of Candyman. Loaded with behind-the-scenes content and conversations surrounding the character's legacy, the home release contributes plenty of additional content to discover the intentions behind the film. Having now watched the movie in its 4K glory more than once, there are a few specified Candyman qualities to acknowledge its status as a worthwhile film.

A greater focus on the idea of Candyman

The first Candyman was a phenomenal film that has helped make Tony Todd an undeniable horror icon. The actor's ability to create a sense of dread with each scene, his commitment to practical effects, and everything imaginable (from the first Candyman) present Todd's contribution to the vision of writer and director Bernard Rose. In the new Candyman, the character receives less screen-time with expansion to a carefully reimagined origin story.

In the present day, this is a vital choice that pays off in an era where films like Hereditary, Midsommar, and Us have proven to be the arthouse-style horror modern moviegoers are drawn to. Even our new protagonist Anthony McCoy's (Yahya Abdul-Mateen II) life as an artist himself is pivotal to the connective tissue of the original Candyman and the new origin – or the notion of the Candyman' hive'. Leading us into the film's major focal point.

A different look at the social commentary of the franchise

In the original Candyman, Todd's character Daniel Robitaille was a victim of racial violence that villanized him post-humously. The heinous act resulted in a physical manifestation that would eventually become known as the original Candyman, and in the 1992 film, focused on his particular experience. In this far-off sequel, we learn about Robitaille, but the smart choice to adapt several versions of Candyman that were known by other generations (the aforementioned hive).

These introductions each tell a unique story but are connected through systemic racism depicted in Anthony's art – but also very literally through the characters all too real treatment of Black men in America. These ideas explored are a greater addition to the recurring theme of generational trauma within Candyman that's a merely fictional fragment of the real-life pain that the film introduces to its viewers.

With films like Halloween (2018), or the upcoming Scream (2022), it's becoming very normal to bring back property without numbering adding numbers to franchise installments. For Halloween, it was still a sequel, yet so far removed that there was no reason to call it "Halloween 2" over 40 years later. Similarly, Scream has always worked as a film with an unseen backstory (Maureen's prior off-screen death) and ties directly into events of the original – with a brand new opportunity to find new viewers.

Candyman is in a league of its own for its attempt to it juggle the idea of being a sequel, revival, and expansion of the franchise all in one, becoming one of the most ambitious franchises imaginable. With the idea of an in-between Candyman, it becomes accessible to modern viewers without interest in the original film – but the reveal of Todd's return can be a treat for long-time fans. The twist still succeeds without someone having knowledge of Candyman as well, given the hive discussion in the film and succeeding in balancing two worlds with context.

The brilliant nods to characters like Helen Lyle (Virginia Madsen) or the surprise addition of Anne-Marie McCoy (played by Vanessa Estelle Williams) add weight to its status as a sequel, and the handling of both roles happens to be one of the film's biggest assets as far as critical ties to the first film.

The first Candyman film has some very visual nods to horror, with the use of bees, a blood-drenched apartment, and multiple attacks, but DaCosta's adaptation plays up a more ambient horror.

There are scenes where the sequences with a potential Candyman are so brief and unpredictable that requires more attention to detail for viewers and filmmakers. The use of slow, dreaded character innuendos, as seen by Anthony and Brianna Cartwright (Teyonah Parris), leaves enough to the imagination that you're questioning what you might have seen or not seen. When Candyman reaches its climax, we witness a shift that feels like a heightened horror for the film and that provides enough stylistic transitions to say that there's deep-rooted respect for the intricacies of suspense.

Abdul-Mateen's slow transition from being a passionate artist to being a victim of the Candyman legend is the most effective slow-burn with an ending that you can tragically foresee based on history alone.

Candyman is available on Digital, DVD, Blu-ray, and 4K, so make sure to check it out! 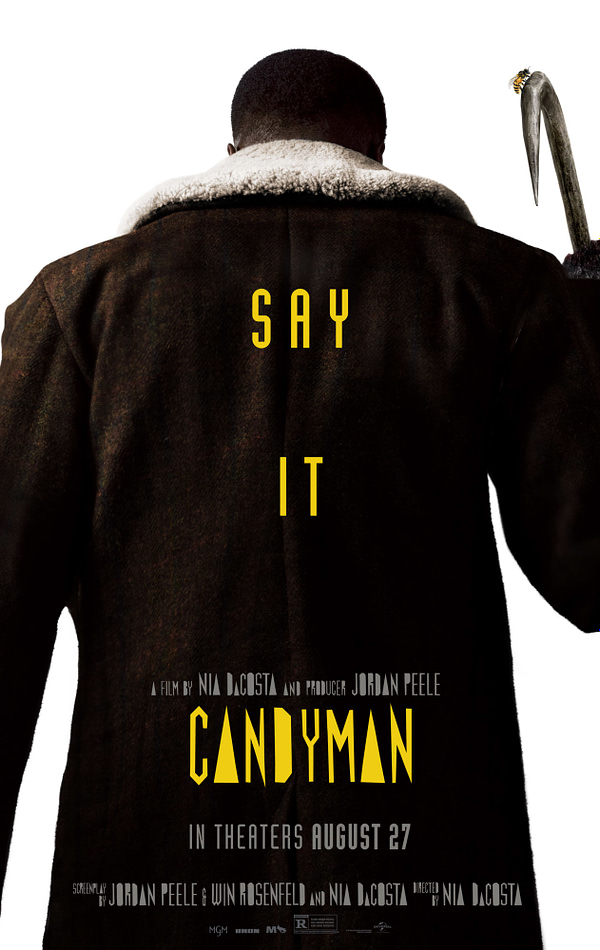 Review by Aedan Juvet
8/10
Candyman is the first of its kind to act as an introductory film, but also a true sequel to fans of the original. DaCosta's expansion of lore and focus on racial injustices makes this cinematic revival a title with ambition behind its message.

Jason Blum recently offered an update on a potential Happy Death Day 3 after radio silence on the state of the franchise for several months.

Scream Easter Egg Reveals the Fate of This Scream 4 Character

After a highly debated choice to leave one character's fate ambiguous in Scream 4, the new Scream Movie finally provides an answer (Spoilers)

Scream has returned to dominate the horror genre and stke its claim as the epitome of a perfect modern slasher movie while respecting legacy.

New Scream Featurette Takes Us Back to Woodsboro

The new Scream film has provided a featurette that focuses on the original film and its importance regarding the returning trio of survivors.

New Resident Evil: Welcome to Raccoon City zombie art has been unveiled, showing the progression of changes made for the live-action film.

This week's Mondo music release of the week on vinyl is the soundtrack to Pixar film Coco, available Wednesday.

Batgirl: Ivory Aquino Has Joined the Cast as Alysia Yeoh

The Batgirl cast continues to grow as Ivory Aquino has joined the cast as Alysia Yeoh, a character first introduced in Batgirl Vol. 4 #1.

In a tie-in promotion with The Batman, Little Caesars has created The Batman Calzony, some strange and unholy union of pizza and calzone shaped like a bat.

Uncharted will have some pretty bonkers action scenes, but the one that everyone is probably going to be talking about is the plane fight. We got to see

The first teaser trailer for Guillermo del Toro's Pinocchio for Netflix is here. The film will release this coming December.

It was the title that first caught my eye, I admit. Do Girls Dream of Electric Sheep is a short British sci-fi film being made by film students, with paid