For you, precious Bleeders, there is little we will not do. Today, we are braving Hall H to bring you the latest news from Warner Bros. Pictures. While tonight DC Entertainment is slotted to close the night with a showcase of its television programing, we're expecting some film-related news this morning.

That is, if you smell what I'm cookin'.

The SDCC OverLord bodes everyone to return to their seats. The lights dim. People are losing their shit. WELCOME TO HALL H.

Eddie Ibrahim takes the stage. He knows WB likes to go big. That's when the screen starts extending all the way around Hall H.

Chris Hardwick enters and IMMEDIATELY showcases the screens with concept art of the upcoming film.

Zack Snyder hits the stage, fresh off a plane, says that they're shooting right now, so they don't have any footage to show. The crowd doesn't like that. So he decides to show just a little taste of what they have on film so far.

"It's a tiny little thing."

Batman is standing on a rainy rooftop, clad in heavy armor and a visor that makes his eyes glow. He turns on the bat single, blasting into the sky, when lighting strikes. The signal goes out, and there's Superman, hovering above him.

Snyder introduces Ben Affleck, Henry Cavill, and Gal Gadot, who quickly pose for photos before heading back to finish the film. They show the footage again, because it's frickin' awesome.

Next up is Jupiter Ascending, and Channing Tatum heads to the stage.

Next up is Jupiter Ascending, and Channing Tatum heads to the stage. He screens an extended sequence that goes into the film's plot and the character's roles.

The screens then change and showcase Mad Max: Fury Road. Charlize Theron gave a pre-recorded message praising director George Miller's vision and the opportunity to work with him.

After a quick montage of classic Mad Max moments, Hardwick introduced Miller to the stage.

"Who know that Mel Gibson would turn into Mad Max at some point?" Hardwick joked.

After the first question of the Q&A, they screened an exclusive trailer which was the first showing the film has made. It looks very much like Mad Max, but everything is turned up a notch due to the massive budget. The highlight of the trailer showed Tom Hardy and Nicholas Hoult's characters in an epic car chase through a desert storm. Getting to close to the tide of torrential sands instantly sets their pursuers vehicles ablaze.

Miller answered a few more questions about the new film's place among the original series before heading off.

Hardwick left as well to the chagrin of the crowd, but promised that everyone would be satisfied with what's next.

After a montage of both the Hobbit and Lord of the Rings series, a video of Stephen Colbert's cameo in the film played. The lights come on, and out comes Colbert, clad in his peasant-spy outfit from the film with one of his little helpers. "Go tell the Bowman the Hobbit panel is starting," her orders, and the kid scamps offstage.

Colbert recounts his love for J.R.R. Tolkien's lore before playing an extended blooper reel from all films in the series, capping off with epic moments before the lights return.

"There's always sadness and tragedy," Jackson says of the end of the Hobbit. "It's always wonderful when you can kill all of your characters." 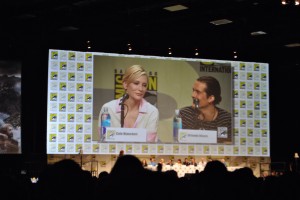 Speaking of how long they've all been involved with the series, Jackson recalls that Wood was 18 years old when they started, "And he still is," said Colbert to laughs. "Did you realize you hired the immortal man?" referring to Wood's boyish looks. 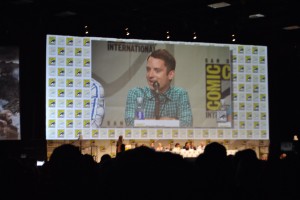 Wood is chided because he's never read the Lord of the Rings series. Lilly, who proclaimed that she got her role because "her shit sparkles," said she LOVES the series but refused to finish the last few pages because she doesn't want the story to end.

The panel then screened a teaser trailer of the last Hobbit film, the Battle of the Five Armies.

The Q&A began and a fan asked Benedict Cumberbatch, Andy Serkis and Lee Pace if they could take the characters they played anywhere to Comic-Con, where would they go?

Serkis channeled Gollum ,"I'd like to go backstage with Stephen Colbert and see what it's like under his costume PRECIOUS."

A fan asks about cut scenes that didn't make even the extended cuts of the films and whether we'd see it. Jackson said that all of the film reels, a massive amount of film, is stored in a bunker somewhere in Arizona and that it is a big logistical issue to get it all together. "But if the interest is there…" he finally added as the crowd cheers.

The panel ends with the announcement of a contest where 75 people can win a trip for themselves and a friend to New Zealand where they'll undergo a massive Tolkien-lore pilgrimage.  Jackson then announced the first two winners of the contest, a pair of fans in Hall H who rightly began flipping out and rushing the stage.

The panel thanked Colbert, who closed out the section with another screening of the trailer.

Chris Hardwick returned to the stage and took another selfie with Colbert before thanking everyone. And that's a wrap!