There's a dysfunctional twist on the saying, "If it ain't broke, don't fix it" when it comes to the Netflix series Cobra Kai. In this case, many things get broken then hastily patched together with twigs and leaves but it still manages to "MacGyver" its formula together in new and creative ways. Four seasons in, there is some risk that Jon Hurwitz, Hayden Schlossberg, and Josh Heald's series shows its wear when it recycles storylines. While some could see it as a point of empathy, others see it as the creators going to the well that might provoke an eye roll. There's certainly a level of tone-deafness in regard to the fandom with such investment in the characters, but the familiarity without authentic growth can potentially get grating at times. So without further adieu, this is your minor spoilers warning for the series.

So the first thing is the 800 lb gorilla in the room is Thomas Ian Griffith, who makes his triumphant return from The Karate Kid Part III (1989), as Terry Silver. While the film was often maligned as the worst of the franchise, he's far more layered than the 80s villain clichés he was riddled with from the original film. In fact, he's probably the most refreshing addition to the series and by extension, what the genre has to offer in Cobra Kai because like several other actors who signed on for sequels to their beloved projects, no one wants to relive their glory days in an exact carbon copy of something they already did. Griffith's Silver is tracked by his former dojo partner John Kreese (Martin Kove) to see if he'll rejoin him to help train his students leading to the upcoming All-Valley Karate Tournament.

While Terry rebuffs John's calls, his former squadmate tracks him down at his place where he's living his comfortable bubble wealthy life. John subsequently pushes the right buttons and eventually renews his interest. As if it doesn't foreshadow things to come, there's a lot of recycled feelings and evocations to Mary Shelley's Frankenstein because of how often the characters abuse the martial arts taught by them in this seemingly endless turf war between the dojos. While we see Daniel LaRusso's (Ralph Macchio) Miyagi-do and Johnny Lawrence's (William Zabka) Eagle Fang combine forces to train together, we quickly find out how futile that eventually becomes. It's certainly not because of the students, but the egos of the senseis.

While Daniel and Johnny continue to bicker endlessly, we do get some predictable hijinks and subsequent toxicity from their war with Cobra Kai. Three of the characters that were more underdeveloped in the past and who finally had a chance to shine and show off their very best were Tanner Buchanan's Robby Keene, Peyton List's Tory Nichols, and Jacob Bertrand's Eli 'Hawk' Moskowitz. Robby develops a bond with Kenny (Dallas Young), who gets bullied by the youngest son of Daniel in Anthony LaRusso (Griffin Santopietro). Kenny's story parallels a lot of what Daniel went through in the films and Robby takes him under his wing to try to defend himself without knowing who's behind it. There are two schools of thought here: first, it's what you expect to happen if it was cinema-like in The Karate Kid; and second, it's what you expect from the Netflix series as far as predictability goes.

With Tory, Cobra Kai never really let her become vulnerable because of that persistent chip on her shoulder. She was never really allowed to be anything other than a bully, which is largely class-based to mask her own insecurities. As ready as she is to fight against the world, she finds the unlikeliest of allies to allow her to organically show her humanity. For once in the entire series, she didn't feel obligated to be stuck in alpha mode. And speaking of alphas, Hawk has become one of the most frustrating characters because of how cruel his character became despite being a victim of bullying himself- a classic case of the abuse victim becoming the abuser

It seems like despite having a crisis of conscience and joining Eagle Fang, participating in the alliance, and also learning the ways of Miyagi-do, Hawk hadn't seemed to change- at least initially. After a traumatic event, we finally see him make a far more genuine attempt at penance with his friends and peers he had long since alienated. It took over three seasons but I'm glad the showrunners and EPs finally gave him a real redemptive arc. As far as the main characters go with Daniel, Johnny, Sam (Mary Mouser), and Miguel Diaz (Xolo Maridueña), we knew they were going to deliver and they do so on a number of levels. The real strength behind the fourth season of Cobra Kai is how the other characters not normally seen in the spotlight actually shine their brightest once given the opportunity. We see genuine growth and progression with all the LaRussos especially with Santopietro, who was never really given anything worthwhile until this season; and Courtney Henggeler's Amanda going way above and beyond the Karen mold she was regulated to in previous seasons.

While those like Amanda, Tory, Robby, and Anthony were once considered more underdeveloped characters, the EPs have made up for that and then some, elevating their presence on the show and growing the show's already impressive ensemble cast. When Griffith was first brought aboard for the fourth season, initial thoughts were that it was more of a gimmick to the season to the films than anything long-term but he's breathed new life into the series by going far beyond what was asked of him in 1989. Cobra Kai introduced a fourth season fueled by growth and change as well as discipline and honor, instilling in viewers the importance of understanding the power we hold within each of us, karate experts or not. It's the kind of message I could imagine Bruce Lee honoring with a respectful nod and smile. Now, where's Season 5?! 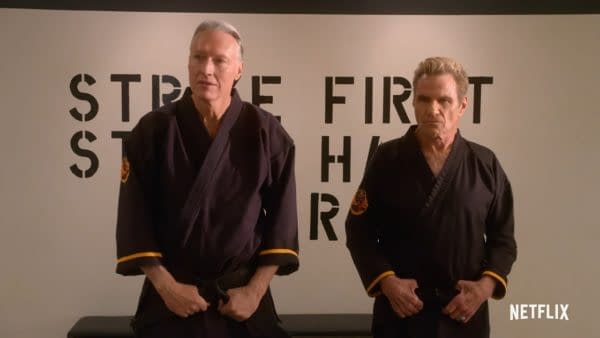 Review by Tom Chang
9/10
The theme of season four is balance and Netflix's Cobra Kai rakes our folks through the coals the entire way. The payoff is totally worth it because we finally get the nuance certain major characters needed while also giving once-supporting characters the chance to shine in the spotlight. Special mention goes to Thomas Ian Griffith, whose Terry Silver served an essential role and as such, took his place at the table when it comes to the series power-players, joining franchise staples Ralph Macchio, William Zabka & Martin Kove as an equal when it comes to the driving forces behind the series.
Credits
Creators
Jon Hurwitz, Hayden Schlossberg, Josh Heald

Doctor Strange in the Multiverse of Madness star Elizabeth Olsen reveals that her commitment as Wanda/Scarlet Witch cost her other roles.

With the Part 1 finale set for next Monday, here's a look at preview images, an episode overview & promo teaser for AMC's Better Call Saul.