Last week on SmackDown, we saw Universal Champion Roman Reigns and the challenger for his title at next week's Royal Rumble, Seth Rollins, come face to face.  They took verbal shots at one another, with each doubting the abilities and accomplishments of the other.  But when Reigns' cousins, The Usos, tried to sneak attack Rollins, it was the wacky Raw star who had the last laugh, as he avoided the attack and even turned it around on The Bloodline.  Will Rollins be back for revenge tonight? Let's find out.

The Usos are in the ring to kick off SmackDown on Fox tonight, where they announce that they will be celebrating Roman Reigns for his 508 day record-setting run as Universal Champion.

The Ones are kicking off #SmackDown RIGHT NOW on @FOXTV! @WWEUsos pic.twitter.com/DpWTZDMLHI

The Champ heads out now to meet his cousins in the ring.  They then play a highlight package of his run as Universal Champion.

The Usos kiss his ass a ton after the video ends until Seth Rollins' music hits and the number one contender hits the stage.

Rollins mocks Reigns and then says he'd rather celebrate the Usos as the longest-reigning SmackDown Tag Team Champions tonight, as they're the ones who hold Reigns up, just like he and Jon Moxley did in the SHIELD.  This was interesting, as he not only acknowledged the star of the competition but also used his AEW name.

Reigns assures Rollins their match will have no interference, but just to hedge his bet, Rollins challenges the Usos to a tag match tonight, where if they lose, they're barred from ringside at the Royal Rumble title match.  The Usos accept, much to the dismay of Reigns.  Rollins then brings out his partner, fellow Raw star Kevin Owens.

Reigns wants to raise the stakes and says if Rollins & Owens lose, the Universal title match at Royal Rumble is off, which Rollins accepts.

Madcap Moss and Happy Corbin are in the ring next, where they mock Kofi Kingston for being all alone now due to King Woods's injury.  They make some dumbass jokes and then Kofi heads out, but he's not alone and is joined by his New Day teammate Big E.  I guess Raw has invaded SmackDown tonight.

This match is much better than their outing last week.  It's longer, has more room to breathe, and has more action, whereas the match last week was rushed and awkward.  Kofi eventually plants Moss with a big kick to the face for the pinfall.

After, Corbin tries getting in the ring, but Big E rushes in and Corbin retreats.  Big E then hits Moss with a Big Ending to send a message to the idiotic duo.

The night of rematches continues!

Before the match, they show Summer Rae in the crowd because she'll be in the Women's Rumble match next week.  She's all but unrecognizable here and there's sadly no mention of Fandango.  The ring announcer announces her in the crowd and refers to her as a "WWE Legend".  Wow, really?  She's a WWE Legend?  So for those keeping score at home, WWE's legends list consists of "Stone Cold" Steve Austin, The Rock, Bret Hart, Shawn Michaels, The Undertaker, and Summer Rae.  Cool…

Anyhoo, the match itself is pretty silly.  Natalya does almost everything here, while Aliyah's offense consists solely of pin attempts (Small Packages, Sunset Flips, Schoolboys, etc.).  Natalya nails her with the mudhole stomps in the corner and the ref calls for the bell for some reason, so Natalya is disqualified.

After the bell, Natalya beats the hell out of Aliyah, which brings out Xia Li (hey, she's still here!) to kick Natalya and chase her off.  What's the point of this booking for Aliyah?  I'm not saying she's great in the ring (or even okay) but how do they think they're building someone if she only gets her ass kicked and then wins by dumb luck?  You're making a new character look like a useless dumbass right out of the gate.

This one only lasts a couple of minutes, but there's an impressive visual when they set up both Lotharios on Erik for him to hit them with a Powerbomb/Powerslam combo at the same time, leading to a Viking Experience for the pinfall.

Before the match starts, Sonya Deville comes out and makes herself the referee for the match, so this horrible and pointless storyline that just serves to stain Deville as a racist asshole continues.

The quick match is full of all of the nonsense you can predict and as soon as Flair locks in the Figure-8, Deville calls for the bell.

We now go to a backstage interview with Seth Rollins and Kevin Owens, where Owens says he's out for revenge against the Usos and Rollins says the risk is worth the reward.

So now we enter the MAGA portion of the show, where not only is a 500lbs neckbearded douchebag right across from the hard cam wearing a "Let's Go Brandon!" shirt while WWE does nothing (if he was wearing a CM Punk shirt, they'd probably beat him in front of his children and then have him arrested), but then they cut to former popular musician and current professional shitrag Kid Rock, who of course waved his racist/sexist/homophobic flag high over the past many years.  Well done WWE.  You never leave any doubt as to where you fall on the decency/political spectrum.

And now it's time for Sami Zayn to make an idiot of himself without actually wrestling as he continues his war against Jackass Forever star Johnny Knoxville.  Zayn says he's going to recreate the stunt that made Knoxville famous, where he'll test self-defense weapons on himself.

Zayn hits himself with a cattle-prod repeatedly before Knoxville heads out to the ring, where he exposes that Zayn never turned on the prod and was faking it.  He then shocks him with it while they play the super-fake electrocution sound effect from when the Undertaker was killed/resurrected after his Casket Match with Yokozuna at the 1994 Royal Rumble.  Knoxville then throws Zayn over the top rope, promising he'll do the same at the Royal Rumble.

We now head backstage, where Adam Pearce is being lectured by WCW Legend Eric Bischoff until they're interrupted by Sonya Deville.  Pearce lectures her and informs her that he's suggesting to WWE that she goes one on one with Naomi next week, which Easy E compliments him for.

Ridge Holland is back with Sheamus tonight after Ricochet broke his nose at WWE Day 1 a couple of weeks ago.  While not quite as good as their match last week, this one was still solid enough for a short match and Sheamus puts Ricochet away with a Brogue Kick.

Rick Boogs and Shinsuke Nakamura are rocking out backstage when they run into WWE Hall of Famer "Double J" Jeff Jarrett, who complements Boogs' guitar skills.

It's always good to see Eric Bischoff and Jeff Jarrett and I have to say, either one of these guys would be better authority figures on the show than Adam Pearce and Sonya Deville and fans would actually believe it too, seeing as both guys ran major wrestling promotions.

It's main event time and for once, it's not the New Day versus the Usos!

And it's a pretty good one too, which I mean, yeah, look at who's in the ring here.  Pat McAfee again mentions Mox on commentary, which might have gotten by both times because Vince has no idea who that is.

On top of stealing the Stunner as his finisher, Owens does the DX "suck it!" crotch chop here as well.  I guess he's just one big ball of Attitude Era nostalgia now.

The match gets more and more exciting towards the end, with lots of big moves and near-falls.  And right as Rollins is about to take it home and hits the Curb Stomp, Roman Reigns flies into the ring to blast him with a Superman Punch to end it in a disqualification.

Reigns stomps backstage as it's announced that the Usos are banned from ringside at the Royal Rumble Universal title match because Rollins and Owens won as SmackDown ends.

And that's that for a not bad episode.  There seemed to be time issues here and that led to segments and matches feeling very rushed, which if that's the case, why not just cut some of the unnecessary crap for time?  I'm sure we could have done without the Aliyah & Natalya nonsense or the Viking Raiders match.  Both were only a couple of minutes anyway, so why not give that to some more substantial stuff?

The stuff with Rollins and Reigns was all pretty good and it was nice to have a new match for the main event that actually involved guys that are in the main event picture right now. 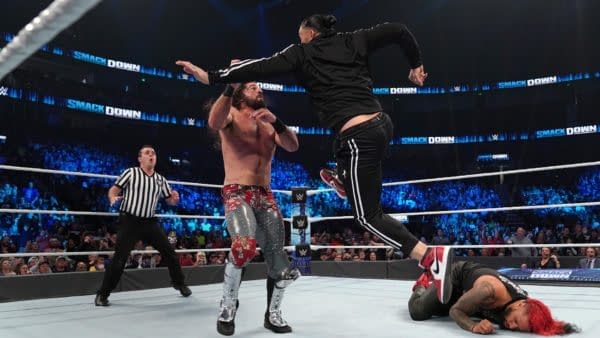 Review by Ryan Fassett
5/10
SmackDown was ok this week. Not a classic or anything unforgettable, but it was ok. The focus was firmly on the Universal title battle going into the Royal Rumble and they pulled it off with fun opening and closing segments and a decent main event match. Was the episode great? Absolutely not. But it was fine and moved the ball down the field, which is something of an accomplishment for modern WWE storytelling.

We have a positive update to pass along regarding the condition of WWE Hall of Famer Jerry "The King" Lawler, who suffered a stroke yesterday.

The Three-Body Problem Ep. 15 is the goofiest episode of them all, but it features a whole country of people turned into a living computer.

Using the belts as a weapon while the referee wasn't looking, The Gunns defeated The Acclaimed to win the tag titles on AEW Dynamite.