Hey gang! So here we are on the last stop on the road to Survivor Series.  And even though it's been a pretty short and unimpressive ride, there's still one last show to make a good impression with before Sunday and that's this episode of SmackDown.  Will it accomplish that?  Well, there's only one way to find out, so let's get to it!

We open things tonight with the SmackDown Tag Team Champions, The Usos, who promise they have a big surprise for their cousin, Roman Reigns.  This brings out the Universal Champion himself, as Reigns hits the ring, along with Paul Heyman.  In the ring are the throne and royal props that used to belong to King Woods.  Heyman says they've been planning this all week, as no one in history deserves to be crowned King more than Reigns.  He says that certainly includes Woods and even Brock Lesnar.

Reigns takes the mic and asks if this is all a joke?  He says he doesn't need all of this stuff to acknowledge how great he is and the only reason he took Woods' crown last week is that he can.

This brings out Woods, who says all of those props do not make a King.  He continues that Reigns isn't a King or a man because he didn't deal with him one on one last week.  He then challenges Reigns tonight, without the Usos present, to see who is truly the best.

Jay Uso then wrecks some of Woods' stuff as Reigns asks if Woods really doesn't care about it?  Both Usos then destroy his throne as Reigns laughs at Woods.  Reigns then takes the crown and asks him again if it doesn't mean anything to him?  As Reigns is about to stomp on it, Woods storms the ring, but is beaten on by the Usos, who then hold him down to watch Reigns destroy his crown by stomping on it.

We now learn that the next Fatal 4-Way Match between Ricochet, Sheamus, Jinder Mahal, and Cesaro will determine the final member of the SmackDown team for Survivor Series.

We find Woods limping backstage now, where he says he will still confront Reigns in the ring tonight.

This one starts off pretty slow, but gains momentum as it goes and it turns out as a fun watch.  Ricochet is definitely the standout here, starring in a couple of different jaw-dropping moments and doing things that maybe no one else in the industry today can do, including a 630 Splash.

The ending gets very exciting with a lot of big moves and some near-falls.  Eventually, Ridge Holland runs out and distracts Cesaro, allowing Sheamus to hit the Brogue Kick and get the win.

We now head backstage for an interview with Jeff Hardy, who speaks on his teammates this Sunday, before getting to Happy Corbin and saying how awful he is.  This brings over Corbin and Madcap Moss (ugh…) who makes jokes about Hardy.  Adam Pearce then comes over, unhappy about the lack of comradere he's seeing in the SmackDown team.  He then sets a match between Moss and Hardy for tonight and Hardy laughs at him.

Joke's on you this time, Madcap!

Sheamus and Holland are celebrating backstage, when they're interrupted for an interview.  Sheamus speaks up Holland and goes on about being an inspiration for the young brawler.

This one sucks, plain and simple.  It's only about a minute long and the ref does a blatant fast count.

Backstage, Sami Zayn bitches to Sonya Deville about his current situation and she tells him that at Survivor Series, she's going to have a 25-man Battle Royal to honor The Rock's 25th Anniversary of his debut (he better actually show up or this is going to be awkward that they used his name so much recently).  She says he can win the match and then be associated with The Rock.  She's then interrupted by the crooked ref from the last match and she chews her out, acting like she had nothing to do with it.

Before the match, Hardy says it's not fair that Moss has Corbin in his corner and he says he wants someone in his.  This brings out Drew McIntyre to get Hardy's back.

The match is whatever.  Corbin and McIntyre both get involved and Hardy gets a roll-up for the win.  After the bell, McIntyre wipes out Corbin and Moss with a Claymore Kick and Glasgow Kiss respectively.  Hardy then hits a Swanton Bomb on Moss to pop the crowd.

We now go backstage for an interview with Paul Heyman, where he says Roman Reigns doesn't need him or the Usos, he just loves them.  He then says Reigns accepts Woods' challenge and will face-off with him later.

We now go to Rick Boogs shredding on a guitar and Pat McAfee dancing on the announce table, which means it's time for Shinsuke Nakamura!

This is another super short match, but they get a lot of action in there so it's not bad, I guess?

We now head backstage, where Shotzi and Sasha Banks are staring each other down and Sony Deville gets between them.  Shotzi names all of Banks' faults as a person (she's not wrong either) and Banks responds with an egotistical rant (see above for the video).  Deville says when the match is over, she expects them to shake hands and work together Sunday.

A pretty good, intense one here.  These two look like they want to kill each other throughout and that tells a pretty nice story.  Shotzi looks consumed by anger and that leads her to make some bad decisions, while they also do a spot where Banks' arm gets hurt and they focus on that through the rest of the match (hey some good old fashioned limb targeting!  Bret Hart would be proud!).

Shotzi appears totally ferocious here and is really coming along as a viable top-heel threat on SmackDown as of late.

Banks eventually traps Shotzi in a modified Crossface to get Shotzi to tap for the win.

After, Sonya Deville appears on the stage, waiting to see them shake hands and bury the hatchet.  They do so, but then Banks hits her with a Backstabber.

.@SashaBanksWWE had to give a strong reminder that she's the captain of team #SmackDown! @ShotziWWE pic.twitter.com/dHrTR74n0a

We now go to Roman Reigns' lockerroom, where he gets ready to head out to face Xavier Woods in the ring.  He tells the Usos to stay and that he'll handle this himself.

Next, we get a video package of a comic book that tells Xia Li's story.

We now go to a backstage interview with Toni Storm where she says how excited she is to be on the SmackDown team at the Survivor Series event.  She also speaks about challenging Charlotte Flair last week, which brings the Champion over and Flair agrees to a match with Storm after Survivor Series.

King Woods hits the ring now to confront Roman Reigns.  Woods brings up how Reigns always needs the Usos to help him and that means he's not a man and can't beat Woods one on one.  This brings out Reigns and Heyman and as they approach the ring, Heyman yells for the Usos.  But there's no response.  We then see each of the Usos thrown violently from the entrance area onto the stage.

Big E's music hits and the WWE Champion makes his way out, looking furious.  He and Reigns start brawling on the ramp and Big E throws Reigns all around the ringside area, before getting him in the ring so he and Woods can beat the hell out of him.

The Usos run into the ring, but are taken out by Big E and Woods.  They roll to the outside and Woods hits them with a diving flip.  Big E turns around in the ring to eat a Superman Punch from Reigns, but when Reigns goes for the Spear, Big E grabs him and goes for the Big Ending.  Reigns sneaks out of the move and retreats as Big E and Woods taunt him from the ring as SmackDown ends.

Not a bad SmackDown tonight.  The New Day vs Bloodline story is a good one and the ending was pretty fun.  I think the show wasn't timed that well, as a lot of the matches were super short, but it is what it is. 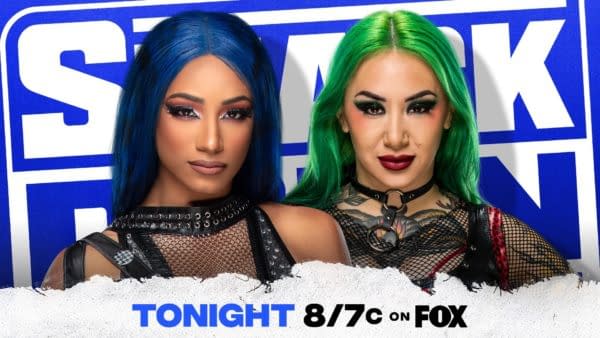 Review by Ryan Fassett
6/10
An ok episode here. The Roman Reigns/King Woods/Big E stuff was really pretty fun and the show opened and ended strong. The matches were all mostly very short tonight, which leads me to believe they didn't time the show very well and tried to cram too much crap into it. But overall, not too bad of an episode and it actually made Survivor Series look a bit more interesting.

SmackDown Recap 1/14: Setting The Stage For The Royal Rumble

Our recap of this week's SmackDown on Fox, which saw Roman Reigns and Seth Rollins face-off ahead of their match at the Royal Rumble.

SmackDown superstar & 2021 WWE King of the Ring Xavier Woods has suffered a leg injury and will miss this month's WWE Royal Rumble.

Here's our preview for tonight's episode of FOX's WWE SmackDown, where Universal Champion Roman Reigns will face-off with Seth Rollins.

WWE Hall of Famer Lita will make her WWE return live tonight on SmackDown ahead of her entry in the Women's Royal Rumble match.