After last week's episode of SmackDown, the brand's two main event matches for April's WrestleMania were set with both Royal Rumble match winners opting to face the blue brand's champions.  Brock Lesnar will challenge Roman Reigns for the Universal title, while Ronda Rousey will challenge Charlotte Flair for the SmackDown Women's title.  Will there be any speedbumps on the road to WrestleMania?  Yeah, I'd say that's a safe bet.

Sonya Deville (with her arm in a sling) opens the show in the ring, where she says she is trying to get Rousey fined and suspended for her attack on her last week.  SmackDown Official Adam Pearce then comes out with an email from Vince McMahon that says Rousey will not be fined or suspended and that Deville is not to interfere in Naomi's championship match tonight or she will be fired and is not allowed to lay a hand on her.

This brings out Naomi, who mocks Deville and then slaps her.

The New Day vs Los Lotharios

So this match happened on last week's SmackDown and it was without a doubt the highlight of the show.  So now they just do the exact same match the week after?  That's incredibly lazy booking.

This match is again lots of fun and the four men have really good chemistry and bounce off of each other really well.  My issue is if you see you've found a good new rivalry, don't run it into the ground by doing the same match week after week.  Mix it up.  Add some other elements to it.  Have them face each other in singles matches.  Don't just throw your hands up and say "that was great!  Now go do the exact same thing!"  That's how you ruin something pretty quickly.

Again like last week's version, the action gets really creative and exciting as the match goes on, with both teams ramping up what they're doing.

Eventually, Kofi tries a diving Sunset Flip on Angel, but Angel rolls through it and folds up Kofi for the pinfall.  Normally I'm not a fan of 50/50 booking, but that's something needed here to make this one different and stand out against last week's match.

We now go to a backstage interview with The Viking Raiders and literally as soon as they speak, The Usos superkick them and beat them up.  So last week Erik got absolutely squashed in like a minute in a singles match against Jimmy Uso and now this.  Why exactly do they think anyone is going to be invested in this upcoming SmackDown Tag Team title match or see the Vikings as any sort of legitimate threat?

Next, we go to a sit-down backstage interview with Michael Cole (BAY-BAY!), Paul Heyman, and Roman Reigns.  Reigns mocks Goldberg's WCW win streak and says if he were there, they'd still be in business.  Really good heel work from Reigns here.

So only pinfalls and submissions can end this match.  This is about as boring and lame a match as you're going to find.  Just awful.  Natalya eventually locks in the Sharpshooter and Aliyah taps out.

After the match, Natalya beats on Aliyah until Xia Li runs in for the save.

We now go to Sami Zayn's InZayn show segment with Intercontinental Champion Shinsuke Nakamura and Rick Boogs.  So they have a back and forth and then as Boogs grabs the mic to yell at Zayn, he's electrocuted or something?  It's not exactly clear, but he goes down and when Nakamura checks on him, Zayn kicks him in the head and runs.

We next go to the medical office where Madcap Moss is being checked out by a doctor until Drew McIntyre appears and threatens him with his sword and informs him that their match at Elimination Chamber is now a Falls Count Anywhere Match.

We now go to a backstage sit-down interview with Michael Cole and Goldberg.  It is what it is.

The match is good, but it's one of those Championship matches where you know there's no way the challenger will win because you know the Champion has a bigger match beyond them.  It's a fait accompli and that kind of takes you out of it a bit.

It is a good match that gets better as it goes and Flair is doing some great work here to sell and to cover for instances where Naomi doesn't quite measure up.  Eventually, after many near falls, Flair hits the Natural Selection for the pinfall.

After the match, Sonya Deville and Flair jump Naomi, which brings out Ronda Rousey, who clears them out as SmackDown ends.

Well, there's another SmackDown where it feels like nothing was really progressed at all.  There were some decent matches, but the time between Royal Rumble and WrestleMania should be all story evolution and they're just not doing it. 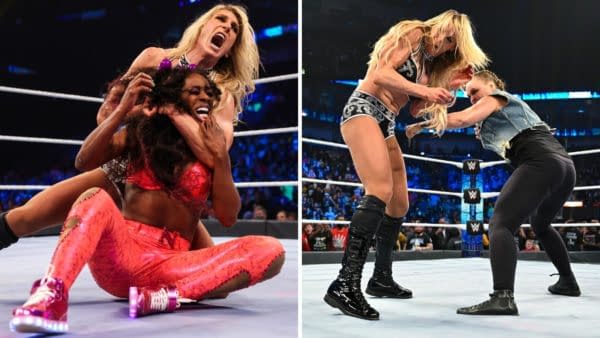 Review by Ryan Fassett
3/10
Some decent matches couldn't cover up the lazy booking and overall useless feeling of this episode. Every story and rivalry is stagnant at the moment and they're just wasting TV time.

Meet Yourself, a feel-good fantasy series that's China's biggest TV series (over 1 billion views) and could easily be a US or UK show.

The Last of Us S01E03 Review: A Heart-Warming, Soulful Dramatic Change

Departing from the game, Nick Offerman & Murray Bartlett turn in award-worthy performances as Bill and Frank in HBO's The Last of Us S01E03.