FOX's The Great North asked why a Moose would lick a truck and how you know someone is truly related to you in the episode "You've Got Math Adventure." Some minor spoilers may be ahead, so consider this your fair warning before reading any further…

The Great North truly does a good job at connection and maintaining relationships between characters, with Moon and Honeybee being a perfect example in this recent episode. Exploring how to help Moon prep for his makeup math test, Honeybee tries things her own way but she's a type of character that doesn't stick to a routine if it doesn't work. She ends up going along with Moon's theory that Beef may not be his biological father and that someone else is who doesn't like math the same as him. There's a level of love and patience written so carefully in Honeybee's character. It's something I can see becoming an example for other writers when developing complex characters that exist in these half-hour stories and on-screen moments.

The other half of this episode, featuring the other members of the Tobin family such as Beef, Judy, Wolf, and Ham, ends up blending really well with what is going on with Moon and Honeybee. As the bunch share a communal bowl of soup at a local restaurant, a wandering moose finds its way to their van outside and gets a taste for the road salt along the sides. I continue to wonder if that moose is the same one we saw in season one with the iconic balloons stuck to its antlers which spelled out "SEXI" and I truly hope that is the case. After making it home, the moose continued to lick the van and the solution ended up salting a snowmobile. Turns out the moose was treating the van like its baby and was protecting it. I loved seeing Beef get emotional when the the switch to the snowmobile worked and the moose accepted it.

The Great North truly made me laugh and struck a cord in my heart with this episode. Seeing Moon struggle to understand the differences and similarities between himself and his family was expertly done. I loved seeing Honeybee help Moon by getting the teacher to accommodate him so he could complete the test in a way that helped him prove himself. My favorite moment had to be between Beef and Moon at the very end after the theory of another father was proven false. Beef reveals he has never been good at math and the way him and his son connect as they say their goodnights was purely heartfelt and a great way to end the episode. This episode of The Great North had to have one of my favorite songs during the credits, legitimately making me laugh and want to play it over and over again. I've included the video of it below, so please do enjoy it. Let me know in the comments below what you thought of this episode! 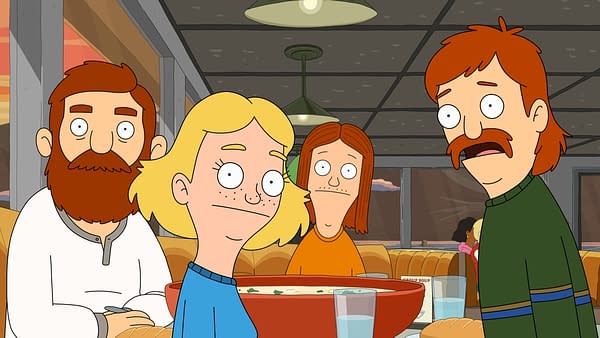 Review by Brittney Bender
10/10
FOX's The Great North S02E15 "You've Got Math Adventure" was a fantastic example of how stories can blend together seamlessly in a singular episode while still maintaining their narrative individuality. The themes of sense of belonging and what family represents were woven throughout expertly.
Credits
Network
FOX

The Lord of the Rings: The Rings of Power Teaser: Evil Has Its Origins

With the series hitting this September, a new The Lord of the Rings: The Rings of Power teaser warns that "Nothing Is Evil In The Beginning."

If you've already streamed Netflix's The Umbrella Academy Season 3 then join the cast for a very spoiler-filled look into what it all means.

With the final two episodes set to hit screens this weekend, the newest key art poster for Stranger Things 4 focuses on Eleven vs. Vecna.