FOX had a spooky lineup, starting with the tradition of The Simpsons Treehouse of Horror, specifically Treehouse Of Horror XXXII, whose animations styles and storytelling won someone's night…just not mine, that's for sure. Right off the bat, a twisted take on Bambi introduced us to this special episode, full of limbs flying off of a rabbit and lyrics mentioning Disney's killing off of parents in their stories. This had me initially excited to watch, it suggested a specific horror/gore theme, but then things slowly and then suddenly went sour.

The Parasite-themed bit was alright, it wasn't fantastic but it felt old and out of place compared to the other stories. The commentary was spot on for that one, along with the generally great animation, but it felt short and just like a lesser version of a popular film's story.

Afterward came "Nightmare on Elm Tree", which could have been great. I was expecting a fun yet scary connection to A Nightmare on Elm Street, but sadly no. The movement and creation of sentient trees were pretty great, but something stopped my enjoyment in its tracks. The joke used with the Audrey 2 reference (Little Shop of Horrors) could have been the worst possible way to include a classic iconic plant in the episode. The joke comes at the time of supposed "jokes" aimed at trans people, so the dialogue between a tree and Audrey 2 was in incredibly poor taste. Along with that, it was also a shitty & lazy joke to make when the possibilities are endless for something related to that film, plants, and trees. Using trans people, their identity, and their existence as a flippant line in your already discombobulated episode is just stupid. Trust me I looked into it, I wanted to see who wrote these lines and as far as I can tell, not a trans person in sight. It continues the transphobic jokes akin to "Oh, I identify as a house" or some dumb stuff like that. What could have been a great story was messed up by old thinking. "Conveniently" it's not featured in the clip below that was posted a couple of days ago.

The Simpsons Treehouse of Horror XXXII gave an excellent and incredibly unique line of animation with "The Telltale Bart", but it was so quick to go to a commercial that there wasn't a lot of time to enjoy it. The occasional well-told joke was in there, but alongside overtly quick scenes, nothing made sense like it could have if the focus was made on two or three stories instead of the ones they offered. While The Ring-inspired story with Lisa was funny and included a modern take with Tik Tok, it felt lazy as well. At the last minute, they went meta with it and included a conversation between Kang and Kodos, which tells me they knew it wouldn't be a success this year. I'm a lover of dark humor and storytelling that can be found in The Simpsons, but this episode was an extreme disappointment for the few quality pieces of material found in it.

The Simpsons Treehouse of Horror XXXII 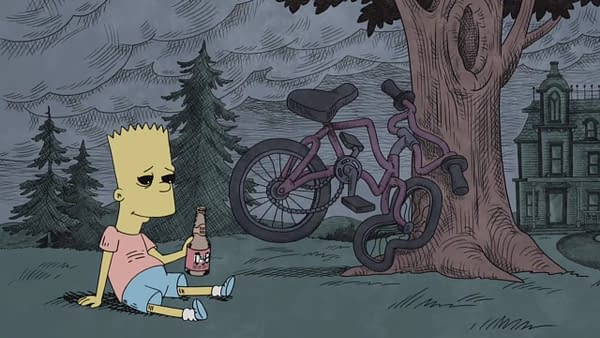 Review by Brittney Bender
4/10
The Simpsons Treehouse of Horror XXXII had a scary amount of potential, but the combination of too-quick storytelling, a cheap transphobic joke & a lack of respect for their audience left a lot to be desired.
Credits
Network
FOX

Gene and Bob explore some games at a new virtual reality arcade next to the restaurant in the most recent episode of FOX's Bob's Burgers.

Doctor Who: When Doctors Collide! Let's Look Back on Those Crossovers

With the BBC's Doctor Who 60th anniversary on the way, let's take a look back on those moments when one Doctor just wasn't enough.