It's only three weeks until WWE's WrestleMania and while the SmackDown brand has a couple of matches booked for the big "show of shows", they still have quite a bit of work to do.  Big titles like the Intercontinental and Tag Team titles still don't have matches set and there are a number of big stars who are still yet to be booked.  Let's see if they started sorting some of this out on this week's show.

This week's show opened with a live appearance by the WWE Champion Brock Lesnar, who came to the ring looking pissed.

THE BEAST is in Birmingham for Friday Night #SmackDown! @BrockLesnar pic.twitter.com/X6XuQWooyR

And pissed he was, as Lesnar declared he was out for blood and demanded his WrestleMania opponent, Universal Champion Roman Reigns, come out for a fight.  Instead, he was greeted by Paul Heyman, who tried to talk him down, but was then chased backstage by a stampeding Lesnar.

We now go to a backstage interview with Sheamus and Ridge Holland, where they brag about destroying Big E's birthday gift ATV last week.  But then they transition to introducing a new friend and… yikes.  So their totally new character whom we're supposed to be just meeting is in fact the very popular and well-known Pete Dunne of NXT, whom we saw as Pete Dunne on WWE programming just three nights ago, except now we're supposed to refer to him as Butch.

I have to ask, what is the point of NXT anymore?  Wasn't it, even in and maybe especially in the NXT 2.0 era supposed to be a way for young talents to become familiar to WWE audiences so that when they're ready for Raw or SmackDown, they could just transition over and hit the ground running?  And yet, Vince McMahon is still changing everything about well-known wrestlers when they bring them up.  Not only is that lacking in any point or logic, but man is it insulting the audience's intelligence.

Alright, so let's just get right to it.  As I'm sure you know by now, this match was marred by an awful incident where outside of the ring, Holland tried to overhead Belly-To-Belly Suplex Big E and Big E landed right on top of his head, which broke his neck.

Two things immediately come to mind, the first of which is thank whoever you believe in that Big E is relatively ok and was not paralyzed here.  If you're a longtime wrestling fan, you know a bad spike when you see one and we've all seen some tragic outcomes of it.  Here's hoping that Big E heals perfectly and has a long life and career ahead of him.  He's truly one of the real good guys in the industry and means a lot to a great many people.

The second thing is what the hell was anyone thinking letting a pretty green wrestler do a move like that, much less on the outside?  I know the high-ups in WWE think they're sticking it to Triple H by overhauling the developmental system away from his vision, but if you're solely looking for talent now based on look over ability, then awful situations like this one and some of the recent injuries we've seen in NXT will continue and will end up far more tragic.

We now go to a backstage interview with Sami Zayn, where we learn that Johnny Knoxville has hired an airplane to fly Zayn's phone number all over Los Angeles.

So this is supposed to be a six-man tag match, but the heel team assaults the Vikings backstage as McIntyre waits in the ring.  Corbin then leads a four-on-one jumping of McIntyre in and around the ring.  How could Jinder turn on his 3MB teammate like this?  McIntyre rallies though and wipes everyone out except Corbin, who runs away.

Ronda Rousey hits the ring now for another incredibly charismaless tonedeaf promo against her WrestleMania opponent, SmackDown Women's Champion Charlotte Flair, which draws the Champion out to answer her.

Flair guarantees Rousey won't tap her out at WrestleMania and when Rousey steps up to her, Flair leaves.

A really quick and pointless match here.  There's some shenanigans from Queen Zalina and Carmela, but Banks hits the Codebreaker on Natalya for the pinfall.

SmackDown Tag Team Champions The Usos hit the ring now where they brag about WWE management not being able to find anyone to challenge them at WrestleMania.  This brings out Rick Boogs and Shinsuke Nakamura, who do just that.  Boogs is limping and has a bandaged knee, so The Usos say if he can beat Jey one on one, they can have the title match at WrestleMania.

Right away, Boogs removes the bandages and shows his knee is fine.  He then manhandles Jey as Jimmy and Nakamura fight on the outside.  Jey tries a Superkick, but Boogs grabs it and hits the Boogs Cruise for the pinfall.

Right after the bell, Jimmy blasts Boogs with his guitar and the Usos run off.

Austin Theory comes out before the match and takes a seat at commentary right next to his WrestleMania opponent, Pat McAfee.

That lasts for about a minute and they start brawling all over the commentary area before they're both ejected from SmackDown.

As for the match itself, it's a pretty good one by two pros with a lot of action and fun near-falls.  Eventually, Ricochet hits the 630 Splash for the pinfall to retain.

We now go to the parking garage, where Ronda Rousey and Charlotte Flair are brawling and Flair ends it by suplexing Rousey onto a car and then locking her in a choke hold before officials are finally able to separate them as SmackDown ends.

And that's that for SmackDown this week.  There were some fun moments and WrestleMania is starting to come more into focus, but it didn't feel like imperative viewing and that's not great heading into WrestleMania, where they should be making every minute of TV time count. 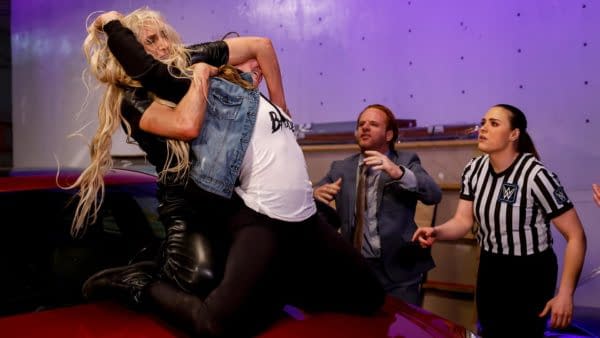 Review by Ryan Fassett
3.5/10
There were a couple of fun brawls and a good main event match during this week's edition of FOX's WWE SmackDown, but it all felt very scatterbrained and without focus or importance, which isn't good when heading towards WrestleMania.

Congressmember George Santos reportedly claimed they produced Spider-Man: Turn Off the Dark, raising questions like... really? That one?

Following up on a report from last month, Netflix's Squid Game: The Challenge is facing more accusations of unsafe filming conditions.