In last week's episode of WWE SmackDown on FOX, we saw Xavier Woods reach his breaking point in his ongoing feud with the group of Sheamus, Ridge Holland, and Butch.  Fed up with their interference in his matches and constantly being outnumbered, he challenged them to a six-man tag match this week, where he would face the three European brutes with his New Day teammate Kofi Kingston and a mystery partner to even the numbers.  Did Woods' plan pay off?  Let's take a look.

The show this week opens with the Undisputed WWE Tag Team Champions The Usos hitting the ring and giving credit for their win last week to their cousin, Roman Reigns.  They then proceed to reflect on it being their 12-year anniversary in WWE and give a very raw and emotional thanks to the audience… but then turn it around and say they've realized they don't need anyone and make fun of the crowd. Nice swerve!

This brings out Shinsuke Nakamura, who challenges them for the titles with his partner Riddle.  The four of them brawl in the ring a bit before The Usos get out of dodge.

We then go to the locker room, where Shotzi is speaking to the other women and asking why Raquel Rodriguez is getting title opportunities over them?  She gets all the women riled up to go stop the match, but she's the last one to exit and the door is locked.  We then see Aliyah on the other side of the door with the key.

So we're getting what looks like another solid match between these two, when about a minute in, Natalya and Shayna Baszler interfere and that ends it all.

We come back from a commercial break and as you can predict, we now have a tag match underway with everyone.  It's an alright tag match.  They do a good job selling damage to Rodriguez's knee throughout.  She eventually powers through and plants Baszler with the Chingona Bomb, which they're now calling the Texana Bomb because apparently they finally looked up what Chingona meant this past week, and pins her for the win.

Next, we get a backstage interview with Kofi and Xavier, who say that they've had lots of people calling them trying to be their partner for their match tonight.

As the match is about to start, we get a really stupid thing where Jinder can't find Shanky and he eventually walks in on him dancing in the locker room.

This was pointless and has no bearing on what happens after, so I guess Vince just came up with it and thought it was hilarious.  The match itself is quick and dumb and ends with a surprise pinfall.

After the match, Jinder and Shanky argue, before Shanky starts dancing at ringside for the ring announcer lady.  This is the point of the show where I start drinking heavily and waxing poetically to anyone in the room about Bret Hart.

We then go backstage to Adam Pearce's office, where he's again met by the very upsettingly wasted former LA Knight, now known as Max Dupri, who is confirmed as a member of the WWE SmackDown roster and says he's in search of his first client for his modeling agency.  Man, even with a dumb gimmick like this, Knight/Dupri is just killing it and can talk better than anyone else in WWE.

We're getting a Friday edition of The K.O. Show now with Kevin Owens, who says his guest will be a member of The Bloodline.  His guest isn't Roman Reigns or The Usos, but rather his Canuck buddy Sami Zayn and they do a whole comedy segment here that ends up having them calling out each other's b.s.

It's nice to see Kaiser actually wrestling again here and not just being the hype man for Gunther.  The match is solid enough, but not too long.  Kaiser ends it with a running kick to Gulak for the pinfall.

After the match, Gunther and Kaiser beat down Ricochet and Gulak some more.

We then go backstage to see Zayn speaking to The Usos and asking them to officially let him into The Bloodline as an honorary member.

Sheamus and his partners head to the ring and cut a heel promo on the New Day and even take a shot at Big E's injury.  This brings out Kofi and Xavier, who introduce their mystery partner, Drew McIntyre.

The match is a fine one with lots of fun moments and some nice hard-hitting action.  Xavier ends it with a flying top rope elbow drop to Holland for the pinfall.

And that's that for this week's WWE SmackDown, which kind of felt like a house show they threw on TV, except without many matches.  There wasn't any story progression and not much build at all to Hell In A Cell.  And of course, no appearance by Roman Reigns.  Hmm. 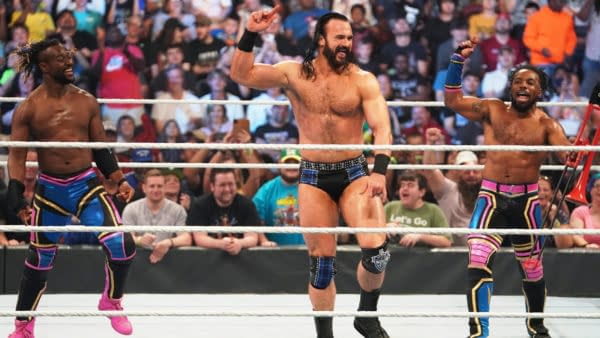 Review by Ryan Fassett
2/10
There was pretty much no build towards anything here this week on FOX's WWE SmackDown, which is kind of surprising seeing as a Pay Per View is right around the corner. Plenty of silly segments and not much wrestling or story did not equal a very good episode this week.