Despite some wildly derivative and frankly less than engaging elements, S.W.O.R.D. #9 presents compelling action framed by a savvy if emotionally problematic element for some legacy fans. There is a twist at the end that's a jaw-dropper (if you've been reading, if this is your first issue, that's out of left field) that also raises as many questions as it answers.

Whenever you see Henry Peter Gyrich (a character loaded with his own complex history), you should know something terrible is going to happen in the name of the national interest, kind of like a news report with the words "Manchin" or "Sinema." Here, Henry has stepped outside of his patriotic roots and started moonlighting from his job running Alpha Flight (the space-based defense station for the earth) to work with the anti-mutant group Orchis … and bringing on board armored "hero" James MacDonald Hudson. There's also apparently a thing for people whose names are pronounced in full being jerks. It'd be like saying, "Captain Canada Goes Racist."

Anyway, imagine the Ku Klux Klan had the education and organization of Elon Musk and Jeff Bezos, and you'd get something like Orchis, a rabidly racist and openly antagonistic element working to attack mutants pretty much all of the time. So "Canada's" flagship "hero" has signed on for, basically, open racism (what kind of retcon will they devise to rehabilitate this choice?) with a guy who has literally almost never been right about anything. If we didn't see swastikas and Confederate flags flying at political rallies, it might be unbelievable, but here we are. Even with that and the fact Hudson doesn't do anything but help propel villain quotes, Gyrich's little secret and a pithy choice of bon mot provide a really good framing device for the story here.

Let's focus on the derivative elements. The Shi'ar Imperial Guard are on hand to bring their adolescent empress for a diplomatic visit since the mutant nation of Krakoa colonized Mars. Yes, people who hate mutants are, of course, very peeved at the idea of them having a whole planet to themselves. Who is the Imperial Guard? Well, many years ago, Claremont and Cockrum decided to copy a lot of the ideas behind the Legion of Super-Heroes and militarize them while taking out the fun, optimism, and characterization. Why not? You get Timber Wolf, er, Fang, and Superboy, er, Gladiator, and a would-be Colossal Boy (using the styling of the best-known costume design) and the rest along for security. Logical enough.

Now, the Not-Legion faces off against the Not Fatal Five, er, the Lethal Legion (not to be confused with literally any previous group using the name ), a biomechanical group of extraterrestrial terrorists who claim to attack "Shi'ar tyranny." So, if you'd like, you get to see a bootleg version of one team confront a bootleg version of their perennial enemies while borrowing the name of some other unrelated group. What's that they say about the copy of a copy of a copy?

Let's be clear: there's nothing wrong with Al Ewing's execution of these ideas in this script. He does excellent dialogue tricks, uses Gyrich's bit as the aforementioned solid framing device, and does a great job with characterization moments on Gyrich, Cable, Abigail Brand, Frenzy (doing well as an ambassador), the Empress, and more. Likewise, Jacopo Camagni, Fernando Sifuentes, and Ariana Maher present a visual tableau of great dynamism and emotional resonance. Everybody put it down on the execution side of the table.

The ideas underneath have a lot of baggage to overcome, which can be done (like in the surprising Hyperion and the Imperial Guard book from the largely exhausting Heroes Reborn crossover), but it didn't happen here. If you love the X-Men or have enjoyed the Imperial Guard in the past, or like Gyrich's endless meddling, S.W.O.R.D. #9 might do the job for you. RATING: HONORABLE MENTION.

S.W.O.R.D. #9
By Al Ewing, Jacopo Camagni
THE SHI'AR IMPERIAL GUARD VS THE LEGION?! With Abigail Brand's attention divided between two S.W.O.R.D. stations, all ORCHIS needs is to pick their moment to strike. Meanwhile, the Shi'ar Empress Xandra is making her first formal visit to the Lake Hellas Diplomatic Ring… and stepping into the gunsights of the all-new LETHAL LEGION! 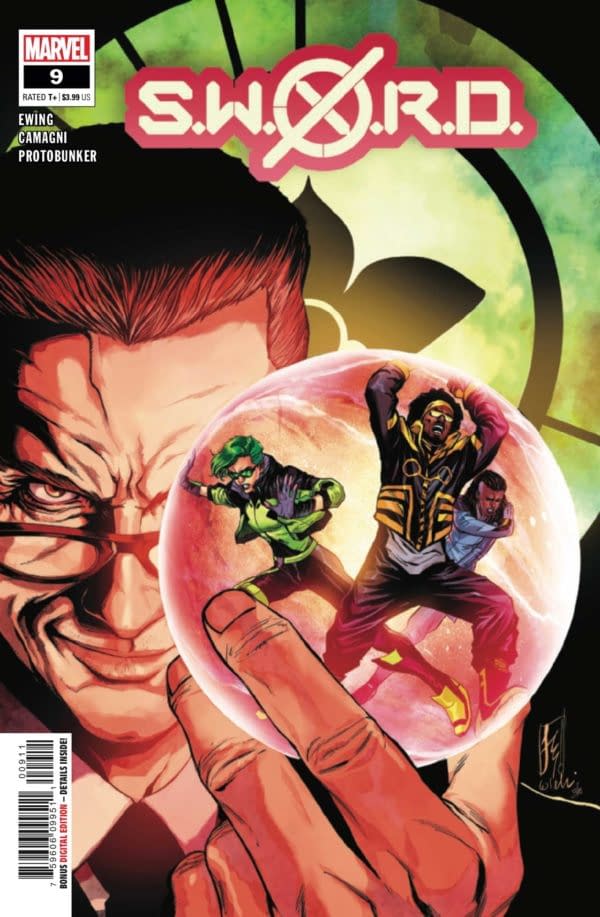 Today sees the publication of X-Force #35, Immortal X-Men #9 and X-Men Red #9. There will be spoilers. Not massive ones, but enough to put the wind up a