Shudder's V/H/S 99 brought together five stories from different creative minds to the screen in a mixed bag of horror splendor with some unfortunate tropes mixed throughout. The directors include Maggie Levin for "Shredding," Johannes Roberts for "Suicide Bid," Flying Lotus for "Ozzy's Dungeon," Tyler MacIntyre for "The Gawkers" and Vanessa and Joseph Winter for "To Hell and Back."

Not all stories felt as impactful as their counterparts in V/H/S 99. While those like "Suicide Bid" and "To Hell and Back" found solid ground in either ghostly lore turned nightmare fuel or in the realm of demonic horror comedy. The other stories felt like a mix of good and bad parts. The good portions involved some fantastic special effects, both digital and physical. Let's go story by story and look at the good and bad parts combined.

V/H/S 99 segment "Shredding" by Levin brought a fun mix of 90's feminist punk and suspenseful zombie horror. The method of showing off a past band that is supposed to be similar to the underground feminist punk movement but sounds like a lesser version of the song from the band in Freaky Friday is a choice for sure. Instead of feeling authentic to the sound of the time, it felt like a cringey commercial and started to throw out any immersive quality from the beginning. Great gory details and a shift in tone made the rest of the segment worth watching till the bloody end.

V/H/S 99 segment "Suicide Bid" by Roberts was a fantastic exploration of pressures, primal fears, and how legends can have a deadly hold on those that pass them on. Subtle signals of character values, perspectives, and more were introduced at the perfect times. The horrors of isolation and deceit invade every portion of this segment. While it felt rushed at moments, with the amount of time it was likely given, it was pulled together really well.

V/H/S 99 segment "Ozzy's Dungeon" by Lotus, with included writing credits from Zoe Cooper, took a stab and ripped apart the true horrors of spectatorship in the 90s on game shows aimed at those of younger age. The set and extent to which design gave a hundred percent to show a concerning game show set with a not-so-subtly racist host. Those aspects of the segment were incredible, and most of it became a truly satisfying horror experience, but one aspect didn't sit well. There was a theme of angry and/or monstrous (or becoming monstrous) fat women. The particular focus on this issue can be seen in the mother and the vessel in which the wish-granting monster resides. Both share a lens of the monstrous, even at different stages. The mother didn't need to be viewed that way and could end up being a multi-dimensional character, but instead, she became a trope alongside the inclusion of a larger woman as the monster. Including these aspects only detracts from the fantastic exploration of the exploitation of kids by parents and society that could have been seen in this segment.

V/H/S 99 segment "The Gawkers" by MacIntyre felt incredibly uncomfortable in the worst ways for the majority of the time. The concept just felt overused, and the ways in which the Greek myth was used felt half-assed and as if the creator watched a depiction of Medusa and said, "Hold my light beer; I can make this a tad more sexist." While it was taking into account the wonders of advancing late-90s technology, the horror went in a direction that did it a huge disservice. It doesn't matter if the character ends up as a monster; they still deserve some semblance of personality or intent.

"To Hell and Back"

V/H/S 99 segment "To Hell and Back" by Vanessa and Joseph Winter was a fun demonic ride through the dread of Y2K. The setting of this underworld mixed visuals that could be found in either a scary episode of Star Trek: The Next Generation if it went on acid and watched Hellraiser. Also, there's a hero and a wonderfully made character in the center of the story with Mabel. A mixture of absent-minded tour guide and demonic bridge troll turned friend, Mabel was an oddly horrific delight. This segment was a fantastic blend of horror and comedy wrapped in one insane story.

V/H/S 99 was truly a mixed bag and didn't have as much connective tissue helping it become a complete package for the horror we'd hoped for in a V/H/S film. With the fantastic stories told in "Suicide Bid" and "To Hell and Back," the film pulls itself away from the cliff of self-destruction but not far enough on solid ground to be rejoiced as a horror favorite. 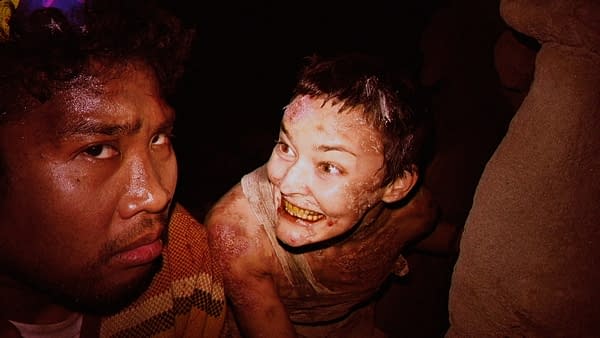 Review by Brittney Bender
6/10
Shudder's V/H/S 99 pulled itself away from the cliff of self-destruction but not far enough on solid ground to be rejoiced as a horror favorite. Segments like "To Hell and Back" and "Suicide Squad" produced fantastic stories but the majority of the film was spending time in overused tropes, misguided resolutions and disguising subpar storytelling with above average visuals.
Credits
Production
Shudder

Ant-Man and the Wasp: Quantumania Writer Wanted a Serious Villain

The writer of Ant-Man and the Wasp: Quantumania explained that the film's villain Kang is intended to be a more menacing foe for the MCU.

The team behind Ant-Man and the Wasp: Quantumania recently shared their take on the Quantum Realm being the "basement" of the Multiverse.

At the premiere of the highly anticipated film Ant-Man and The Wasp: Quantumania, Kevin Feige teased what fans can expect for MCU's Phase 5.