Sometimes the best horror films can come from a place of comedic joy, even if a tad dark and surprising at points. Recently I had the opportunity to watch Werewolves Within, a horror-comedy with a star-studded cast that arrived with just a perfect amount of dark humor for a fan of the macabre like me. The film follows a park ranger, Finn Wheeler, played by Sam Richardson (Veep, The Tomorrow War), who gets reassigned to the town of Beaverfield only to find there's more to the job than he's bargained for. Starring alongside him, Milana Vayntrub, who plays Cecily Moore, becomes a fantastic counterpoint to Richardson's initially timid character. Werewolves Within involves a sort of whodunnit plot, where classic detective qualities intersect with pure horror cinema moments. When the very small group of townspeople experience a clash of personalities amidst a missing dog and a dead body, it's up to Finn, the outsider, to attempt to regain some sense of order or answers.

Werewolves Within has origins in the gaming world, with its concept coming from a Ubisoft game of the same title. The game involves a similar theme; multiple attacks from a mysterious creature cause the townspeople to use social deduction and investigation to find the individual responsible. Werewolves Within found an excellent spot between the qualities that have made the game a favorite among players and the characteristics that are a foundation for horror-comedy films. The cast, including What We Do In The Shadows star Harvey Guillén, is a fantastic choice for this film. Each represents their character in genuine ways and hits their comedic lines with such efficiency. The setting provides you with a feeling of isolation from the outside world, cultivating an environment ripe for horror to take over. The witty and fast dialogue helps move the characters along as their stories go in separate directions.

Werewolves Within does have some kinks it should have worked out before filming, such as the pacing of the story itself. At times it went from understandable to then frantic in order to catch up with the time limit it naturally had as a movie. My ultimate love for the film, I personally consider it a cult classic in my horror lineup, does not falter. When watching Finn work through his introduction to the town, things made sense and felt smooth. But when more characters were involved, it could become hectic at times, both in positive ways that helped the mood of the story but also in some negative ways that derailed it. In the end, the loveable and laughable characters, fun twists, and personality had me excited to watch Werewolves Within again in the future. 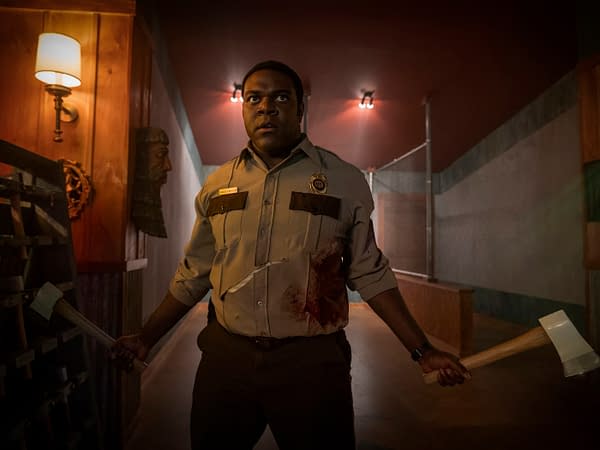 Review by Brittney Bender
8/10
Werewolves Within is a witty and fun exploration of horror-themed whodunnit. The film doesn't take itself too seriously, providing tons of comedic moments alongside the monstrous ones for a memorable joyride through a park ranger's worst nightmare.
Credits
Production Company
Ubisoft Film and Television

FOX's Bob's Burgers Comic-Con@Home 2021 panel offered fans an early look at Season 12 and an update on film talks; plus, a fan Q&A.

CBS' Big Brother houseguests deal with the confusion of multiple alliances, big egos, and the reality of pawns in the most recent episode.

Reservation Dogs Preview: It's All About How You Define "Jurisdiction"

Personalities went wild as the creators and cast of FOX's HouseBroken discussed characters, their favorite moments & more at Comic-Con@Home.

Zombies, stand-up, fart jokes, and musical numbers were some of the attention-grabbing topics at The Great North Comic-Con@Home panel.

Kevin Can F**k Himself actor Eric Petersen discusses Boston accents, his fav series moment, what Kevin would think of the show, and more.

The trailer for Full Moon Features new Demonic Toys film Baby Oopsie is here! It debuts on their streaming service next Friday.

A new trilogy of Exorcist films is coming from Universal, Blumhouse and Peacock starring Leslie Odom Jr. and directed by David Gordon Green.

Midnight in the Switchgrass: Randall Emmett on His Directorial Debut

Randall Emmett talks to Bleeding Cool about the crime drama Midnight in the Switchgrass for Lionsgate in his directorial debut.

Baker: Nothing But Praise for Ackles During The Long Halloween Panel

Troy Baker had nothing but praise for Jensen Ackles today during the CC@Home panel discussion of the Batman: The Long Halloween, Part Two.

Jolt: Kate Beckinsale is a Violent Dork in an Incongruous Actioner

Jolt is yet another pulp female action thriller that has its tongue in its cheek and its boot in someone’s face. Its high concept is a heroine with