FOX's Bob's Burgers brought a lot of nostalgia back for many of us with Gene's latest interest, something very similar to the wonders of Tamagotchi. Warning, some spoilers may be waiting ahead for you so make sure to watch the episode first and then come back if you don't want anything revealed to you. Otherwise, see you on the other side of this image break…

Bob's Burgers gave us the gift of Purrbo, a keychain-sized game Gene found at a local yard sale for a dollar and the obsession grew from there. The only problem with this scenario, poor Bob attempts to understand how to get his son back on track with a school project by growing seeds from a wet paper towel. I liked the way Gene's interest was approached because Bob did initially have a stricter view on it all but he then molded his way of thinking so that it didn't hurt Gene but it did push him to finish his project.

What didn't fit in completely within this episode of Bob's Burgers was the side stories involving Teddy with the fish and the parts with Louise and Tina didn't feel necessary and that sucks to say but it's true. I was hoping for things to feel equal to what was going on with Bob and Gene but it never truly got there. I did love the interactions Tina and Louise had with the store owner when it came to the coin-operated ride.

Bob's Burgers has done this a few times with this season and season 11, having some fantastic episodes that give good timing to the stories involved but then the next episode falls off of that trend. I loved the dedication to embracing Purrbo and not resulting in shaming the love of games like those, but overall the episode fell in some spots that didn't involve that. A fun thing to note is that a woman walking in the background outside the restaurant around 3 minutes and 50 seconds into the episode. It's great to see a nod to the crack in the sidewalk in an episode before the film releases on May 27th.

Thanks for reading, to help during this difficult time for the future of reproductive healthcare please consider the resources below for information on local organizations and how to donate: 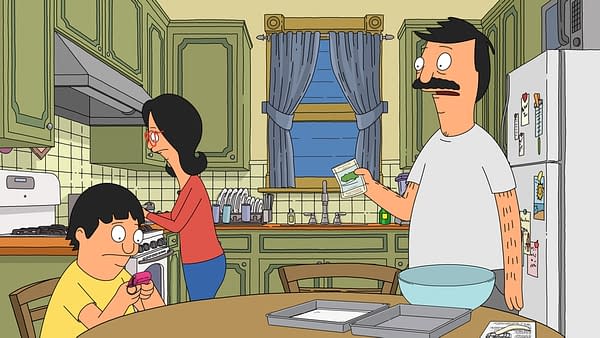 Review by Brittney Bender
7.5/10
FOX's Bob's Burgers S12E19 "A-Sprout A Boy" brought up some truly fun bit of nostalgia with Purrbo, but the other stories alongside that felt off, forced, and unnecessary.
Credits
Network
FOX

Hulu's Only Murders in the Building S02E09 explores how tricky lies can get, how amazing Shirley MacLaine is & why family can be complicated.

The Boulet Brothers are expanding the Dragula franchise with the help of AMC Network's Shudder, including a spin-off, a special, and more.

In character key art for The CW's DC's Stargirl, we see how Brec Bassinger's Courtney Whitmore and more made the move from comics to screen.

Ending weeks of heartbreak, The Acclaimed reunited with Billy Gunn, saving him from a beatdown by his own sons on AEW Dynamite tonight.

Archer Season 13 Teaser: Sterling's Got a New Philosophy of Life

With Season 13 premiering on August 24th, a new teaser for FXX's Archer offers us a glimpse of Sterling's new philosophy of life.

Bryan Danielson defeated Daniel Garcia in a 2 out of 3 falls match on AEW Dynamite, causing friction between Garcia and Chris Jericho after the match.

A new wave of titles has been pulled from HBO Max, including Aquaman: King of Atlantis, Close Enough, Infinity Train, and many more.