As usual, a heads up for anyone still needing to watch this episode of FOX's HouseBroken, plenty of spoilers ahead. First off, I fell in love with The Racoon starting off the second part of this two-part finale. His break of the fourth wall when speaking to the audience by a cozy fireplace had me right away.

The examination of how Honey would interact with the freedoms presented to her alongside Armando versus Chief's reactions is what made this HouseBroken episode a great end to the first season. Those scenes next to the therapy group gathering together to go find them both, after Honey went off to find Chief, helped me care for the characters I had come to cherish over the past ten episodes. Also, the insanity that is Tchotchke, the slow loris with only facial expressions to give, saddling up like a tiny Rambo with nails to throw like daggers was some of the funniest sh*t I've seen lately on TV. The weird relationship he and the Racoon share is also something amazing and perfect for this show.

The side stories on HouseBroken only add on from the previous episode, nothing from them takes away from the bigger portion of the finale, which is great. Shel and Darla may have had a brush with death, but they're still as weirdly sexual as ever. The same well-done wrap-ups of other stories like Chico's and Elsa's gave more support without overstaying their welcome on the screen. Towards the end, we see the therapy group connect to their leader, to Honey, and help her face the lack of transparency she has with them about things like Armando. We see the extent that talking out feelings can have beyond one group when it becomes applicable to the wild coyotes. A fun part of this season finale of HouseBroken is the more equal mix between serious storytelling moments and good comedic dialogue alongside the animation. Based on this second part to the season finale, this series 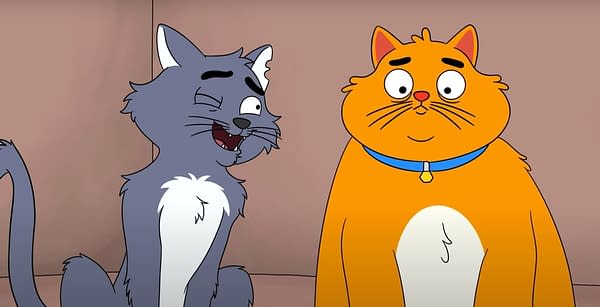 Review by Brittney Bender
9/10
The ending to the first season of HouseBroken did a good job at wrapping up loose ends for side stories while maintaining the humor and heart of its' characters.
Credits
Network
FOX

Conan O'Brien isn't done with the comedy scene by any stretch, discussing his podcast work as well as the upcoming HBO Max series.

All your favorite Hanna-Barbera characters are back on HBO Max this week in the upcoming Halloween special, Jellystone! Spell Book.

Aliens, summer camp, pee, and even more pee made for some great stories in the latest episode of FOX's The Great North Season 2.

Bob's Burgers went on a friendship journey that became a relatable exploration of Teddy's character and why we love him so much.

Season 2 of Hulu's The Great is set to stream on November 19th, but before that fans get to see the wardrobe thanks to Gillian Anderson.

Better Call Saul writer/director Thomas Schnauz used his "stuck at the airport" time to answer some questions about the AMC series.

The Wheel of Time Teaser: Moiraine's Quest is Only the Beginning

With the series premiering on November 19th, Amazon released a new The Wheel of Time teaser, this one focusing on Moiraine’s quest.

AFC Richmond Coach Ted Lasso is excited for this weekend's Saturday Night Live- but not for the reason you might think, Jason Sudeikis!

SmackDown Preview 10/22: WWE Promises The Beginning Of A New Era

The preview for tonight's episode of SmackDown on Fox, which will see the start of a new era with a new roster of superstars.

WWE Is Reportedly "Thrilled" With How Crown Jewel Turned Out

WWE is reportedly very happy with how things went down yesterday in Saudi Arabia at the company's WWE Crown Jewel event.