We have seven announced matches for this week's episode of NXT 2.0 on the USA Network, including a big tag team grudge match, two tournament tag matches, and a North American title match.  That's a pretty hefty card and seeing as NXT often has time management issues, it'll be interesting to see how they pull it off.  Let's take a look.

And we're kicking things off with a big main event tag match.  Ciampa is wearing a multicolor singlet to match with Breakker here tonight.

A really good hard-hitting heavyweight tag match here.  It's intense from beginning to end and has some creative touches throughout.  Eventually, after a great back and forth sequence, Ciampa hits the Fairytale Ending on Ziggler to get the pinfall.

Next, we get a great in-ring promo from LA Knight, where he goes over his history with Grayson Waller, before ultimately challenging him to a Last Man Standing Match next week, which Waller accepts.

We then go to the locker room to find Persia Pirotta and Indi Hartwell prepping for their match, but also arguing about their man issues.

An alright fast-paced match here.  Nothing great, but it was okay and moved right along.  They're definitely planting the seeds for the Pirotta/Hartwell blow-up now.

We next get a video package previewing the upcoming battle for the NXT tag titles between Imperium and The Creed Brothers.

So I've been consistently saying two things for the past many months: they're rushing people into the ring that don't yet know what they're doing and that Lash Legend is awful.  Well, they tempted fate tonight and disaster struck.  Legend looked completely out of control and just plain reckless here and wouldn't you know, she ends up hurting her opponent.  Miller needed to be stretchered to the back for medical help and suffered a concussion.  Please WWE, stop risking your talent's well-being like this.  Nobody should be put in the ring that is not ready and quite frankly, going from what I've seen, I don't think Lash Legend will ever be ready.

By the way, the match itself was also a complete mess of a disaster.

We now go to a backstage interview with Solo Sikoa, who makes it clear he isn't afraid of GUNTHER and will bring the fight to him tonight.

And then we go to another awful backstage "comedy" segment with Brooks & Jensen.

A very nice slugfest of a match here.  They really go shot for shot with each other here and it comes across as legitimately intense and painful.  GUNTHER looks great as always here, but Sikoa really impressed me in this one, looking like a truly viable opponent for a monster like GUNTHER and even dominating him at certain points.  Eventually, though, GUNTHER is too much and blasts Sikoa with two huge Powerbombs for the pinfall.

We now go to a backstage interview with Dolph Ziggler, where he's interrupted by Tommaso Ciampa and Bron Breakker.  They all have it out and it ends with Breakker saying he'll face them both in a Triple Threat Match for the NXT title next week.

Next, we go to Indi Hartwell and Persia Pirotta arguing in the locker room, until Duke Hudson arrives and Pirotta leaves with him.

While Harland has had a couple of matches in NXT, they've all been squashes.  Here's the first one where his opponent kind of challenges him a bit… but not very much.  It only lasts a couple of minutes and Harland puts Anthony away.

After the match, Harland lifts Anthony up and hugs him as Joe Gacy approves.

We now go to a backstage interview with NXT North American Champion Carmelo Hayes and Trick Williams, where he says he's putting away Pete Dunne tonight.

We then go to the Diamond Mine training room, where Tatum Paxley tries to apologize to Ivy Nile for losing last week.

Not a bad match, though there are a couple of sketchy parts.  Leon & Feroz have a really nice showing here, especially in a sequence where they make some awe-inspiring dives to the outside.

Ultimately though, Gonzalez is too much of a powerhouse and puts them away with some Chingona Bombs.

We then go to a completely nonsensical and stupid backstage segment with Sarray and Tiffany Stratton.  Watch at your own risk.

Next, we get a video promo from Tony D'Angelo, where he says he has his eyes on a big opponent for Stand & Deliver.

Chase brings the fight to him to start, but then it's mostly Wagner the rest of the way and he puts Chase away with a modified Death Valley Driver for the pinfall.

We now get a backstage promo from Nikkita Lyons, who answers Lash Legend's trash talk from earlier and challenges her to a confrontation next week.  Lyons needs some more energy in her promo because here, it comes off as her trying to remember lines and speaking too softly and slowly.

A really good, fun match here in the main event.  Very fast-paced and intense throughout with some great near-falls.  Eventually though, Hayes is able to hit the top rope Axe Kick for the pinfall to retain.

After the match, Hayes says he's going to defend the title at the NXT WrestleMania weekend show, Stand & Deliver, in a Ladder Match, though his opponent still remains to be named.

And that's that for NXT 2.0 this week.  A pretty solid night of wrestling without too much comedy nonsense or silliness.  Like I keep saying, focus on the wrestling and it will all be ok. 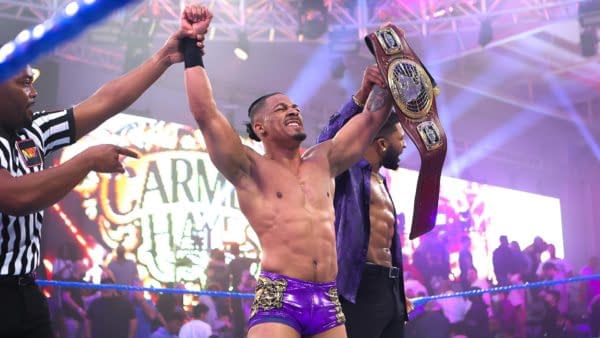 Review by Ryan Fassett
6.5/10
An overall solid show this week where the good outweighed the bad. The two main events didn't disappoint and there were other good matches throughout the show.

NBC's Saturday Night Live host Michael B. Jordan has slept with a lot of folks at SNL over the years & he didn't even know it... until now.

Doctor Who Showrunner Russell T. Davies covered a lot of ground in a recent interview, including "Star Trek" influencing his return & more.

Cowboy Bebop co-creator Shinichiro Watanabe says the Netflix series isn't the anime, though he didn't watch past the opening scene.