Last week's NXT 2.0 ended surprisingly when Raw star Dolph Ziggler defeated Tommaso Ciampa and Bron Breakker in a Triple Threat Match to win the NXT Championship, ending Breakker's reign.  With the brand's biggest show of the year, NXT Stand & Deliver, only two weeks away, all attention is now on who Ziggler will defend the title against at the big WrestleMania weekend show.  Will Breakker get a rematch or will a new player enter the scene?  Let's take a look and find out.

We open this week's show with a couple of Raw stars, as The Miz heads to the ring for a special Tuesday night edition of Miz TV with the new NXT Champion Dolph Ziggler and Robert Roode.

They kiss each other's asses for a bit and Miz shows footage of Bron Breakker being thrown out of the building earlier.  As they brag about how rich they are, LA Knight heads out to interrupt them.

Knight challenges Ziggler to a title match tonight and after a bit of convincing, Ziggler agrees to face him in the main event.

We now go to a backstage interview with Cora Jade, where she reveals she has stolen all of Toxic Attraction's title belts.

NXT North American Champion Carmelo Hayes joins commentary on this one to see who will win the first qualifying match for the Five-Way Ladder Match at Stand & Deliver.

Who will earn the right to battle for the NXT North American Title at NXT #StandAndDeliver? #WWENXT @EscobarWWE @CGrimesWWE pic.twitter.com/CD6ShzQCXN

The match is a solid one with some fun moments, but eventually, Escobar puts Grimes away with a Phantom Driver for the pinfall.

Next, we get a video of Io Shirai and Kay Lee Ray hyping the finals of the Women's Dusty Cup Tournament next week.

We then go to the locker room to find Wendy Choo and Dakota Kai having a run-in with Toxic Attraction.

It's the NXT 2.0 debut for A-Kid here, who was formerly a star in NXT UK.  It's an interesting match too, as there's lots of chain-grappling and mat wrestling here between the two technical talents.  It's a nice change of pace honestly.

A-Kid eventually takes it with a very impressive-looking Springboard DDT off the ropes to pin Kushida.

We now go to a backstage interview with Santos Escobar where he brags about being the greatest luchador of all time, which brings over Rey Mysterio and Dominik Mysterio, who take umbrage with his proclamation.

Stratton jumps Sarray during her entrance and beats her all the way to the ring.  Once the match begins, Sarray rallies a little bit, but it's ultimately a quick Stratton squash here and she puts Sarray away with a corner Corkscrew Splash for the pinfall.  I like this for Stratton.  This gave her an edge and made her look powerful.

We now go to the locker room, where LA Knight is confronted by GUNTHER, who criticizes Knight for talking too much.

Next, we see Jacy Jayne finds her title belt hanging backstage, but when she grabs it, Cora Jade locks her in a cage.

Tommaso Ciampa hits the ring now and cuts a really sincere promo about his long career in NXT and about it maybe coming to an end.  Tony D'Angelo appears in the ring behind him and then explains how he has to beat him to become "the man" of the brand.  He challenges Ciampa to a match at Stand & Deliver, which Ciampa accepts, before he cheap shots him.

This match is pretty boring and lousy, which is saying something because of how short it is.  Eventually, Duke Hudson and Dexter Lumis both wind up at ringside and the distraction allows Hartwell to get the pinfall.

After the match, the four face-off in the ring and then have competing makeout sessions.  Really dumb.

Next, we see Gigi Dolin finding her title belt on the inside of a dumpster and when she climbs in to get it, Cora Jade locks her inside with a forklift.

Hey, it's Dominik competing where he should be right now, but anyway… The match is ok with only a couple of minor botches, but then a whole bunch of unnecessary shenanigans ensues at ringside with Briggs & Jensen and then Rey knocks out Escobar. The distraction allows Dominik to hit the 619 and Frog Splash for the pinfall.

Next, we find Cora Jade in the parking lot trying to drive off with the NXT Women's title belt, but Mandy Rose gets ahold of her and beats the crap out of her.

The Creed Brothers now storm the ring and cut a promo on how they were screwed out of their title shot last week.  They demand that whoever jumped them last week come out and face them.  MSK comes out (rocking nWo shirts) and say it wasn't them, but that they're the ones owed a Tag Team title shot.

Imperium then appears and say that none of them are worthy of a title shot.  They then say they'll put the titles on the line in a Triple Threat Match at NXT Stand & Deliver against both teams.

We now go to a backstage interview with Cameron Grimes, who's really down on himself after losing yet another title opportunity.

We next find Malcolm Bivens interrogating different teams about whether or not they attacked The Creeds last week.

A fine match here between two veteran talents.  Unfortunately, it's too short and I think everyone would have liked to have seen what these two would do with some more time.  Eventually, Ziggler is able to hit a Superkick and pin Knight to retain.

After the match, Bron Breakker storms out and demands his title rematch at Stand & Deliver, which Ziggler agrees to, and they face-off as NXT 2.0 ends.

And that's that for this week's episode of NXT 2.0, which wasn't too bad.  Lots of wrestling action this week and not too much backstage skit nonsense.  Hopefully, the show retains this more serious approach as we continue to get closer to Stand & Deliver. 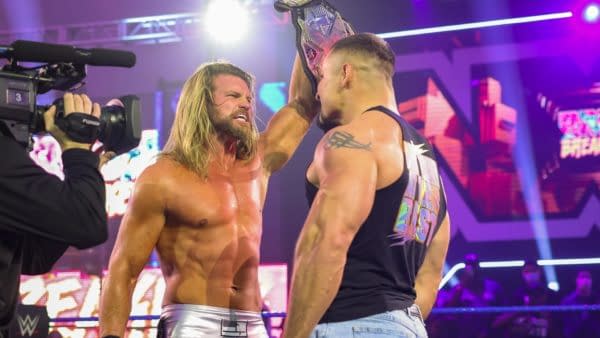 Review by Ryan Fassett
7/10
A solid episode beginning to end this week with some good matches and some good build towards Stand & Deliver, which is developing its card nicely now.

AEW Rampage Review: Another Friday Night Ruined for The Chadster

The Chadster lived out his worst nightmare last night in watching AEW Rampage. Now, read his unbiased take on the show and why it was horrible.

The fine folks over at CW18 Milwaukee released two more "FLASH-back" posters for The CW's The Flash Season 9, honoring Seasons 4 & 5.