In the solicit for Cyberpunk 2077: Where's Johnny, which you can read at the end of the review, CD Projekt Red or Dark Horse use the term hardboiled twice. It's an oversight but a telling one.

Despite the SF setting, Cyberpunk 2077: Where's Johnny is proudly a detective story. It features a battered, defeated investigative reporter and a hidden truth of what happened to Johnny Silverhand's body. Writer Bartosz Sztybor obeys and enjoys the tropes of the genre. There are people that won't talk, lies, "our hands are tied," and the reporter putting liquor in his coffee. Hardboiled is a particular voice that can easily become hokey if the writer isn't careful, and Maia Kenney's English Dialogue Adaptation is always on the right side of the line.

Artist Giannis Milonogiannis's pencils are spare but evocative. Maybe there's a quibble about backgrounds, but the Old City Blues author knows hardboiled detective stories in a sci-fi setting. He's the right man for the job, and it's evident in the work. Milonogiannis's facial expressions are universally vivid. Letterer Aditya Bidikar juggles at least five different flavors of word balloon well, with one particularly striking example below.

Colorist Roman Titov's bright, natural colors during the story's daytime were an obvious highlight. The story felt warmer just for seeing them, which you can get a glimpse at in the above panel.

A hardboiled journalist bent on taking down the corrupt corporations of Night City finally gets his chance to do it. Somebody nuked the headquarters of a major corporation and rumor has it, it was the infamous Johnny Silverhands. The streets are buzzing that hes dead and his body remains at the bottom of the nuked tower. His job: find the body. But is he dead or is it just hearsay? The streets of Night City talk and a corporate downfall is just the beginning.
Original hardboiled graphic novel from CD Projekt Red! 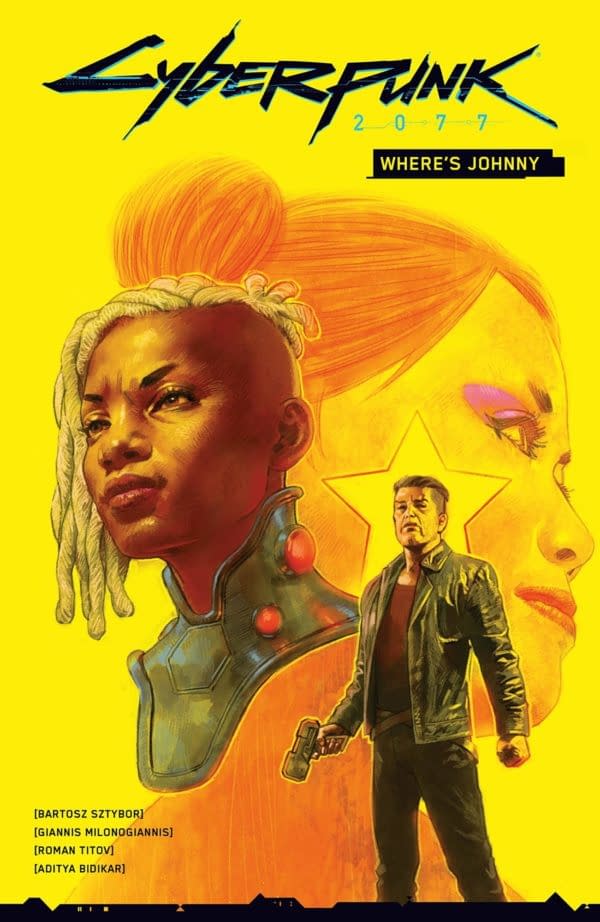