What happens when you send radicalized teenagers into harm's way armed with dangerous weapons and even more dangerous self-confidence? Superman: Son of Kal-El #7 doesn't exactly give us a metahuman Kyle Rittenhouse (because this one doesn't appear to be a jerk, he's just manipulated by jerks), but the metaphors apply.

Tying together things from a recent Suicide Squad run with Thylacine and Chaos Kitten, an organization called The Truth has banded together Greenpeace style to hold "those in power accountable for their actions." Given Henry Bendix as a mad president and Lex Luthor as a Teflon don, they make some very good points about the abuse of power. Before they can recruit Jonathan Kent for some radicalization, an undersea behemoth is driven to the surface by extreme de-oxygenation of deep ocean waters and heads for Metropolis. The nascent Superman and an equally tyro Aquaman tried to dissuade the creature from its path until Bendix's Gamorra Corps (imagine even more generic versions of Luthor's Everyman Project, but flying a flag) stepped in with their own agenda.

This Tom Taylor script hits many interesting notes: the enthusiasm of youth, a desire to level the playing field, ecological dangers, megafauna, and super-powered politics. The artwork of Cian Tormey, Raul Fernandez, Hi-Fi, and Dave Sharpe makes the topics kinetic and urgent in their visual storytelling.

The only criticism is that it may be an embarrassment of riches: the kaiju story gets short-sheeted by the intro to the Truth, and the Bendix-Luthor alliance also gets rushed through without any time for scenery-chewing or monologuing. This was either a thirty-page book jammed into two-thirds of the space or the work of two issues that needed more room so some elements could have room to breathe. That's not bad, but it's not quite firing on all cylinders. It does, however, fire on a lot of them. RATING: HONORABLE MENTION

Superman: Son Of Kal-El #7
By Tom Taylor, Cian Tormey, Raul Fernandez
Superman has recovered from the devastating attack against him. After the life-changing events of issue #5, Jon Kent and his new ally Jay Nakamura are ready to strike back. They are on a collision course with the type of power that is used to swatting problems out of the way. But Superman is not so easily swatted. 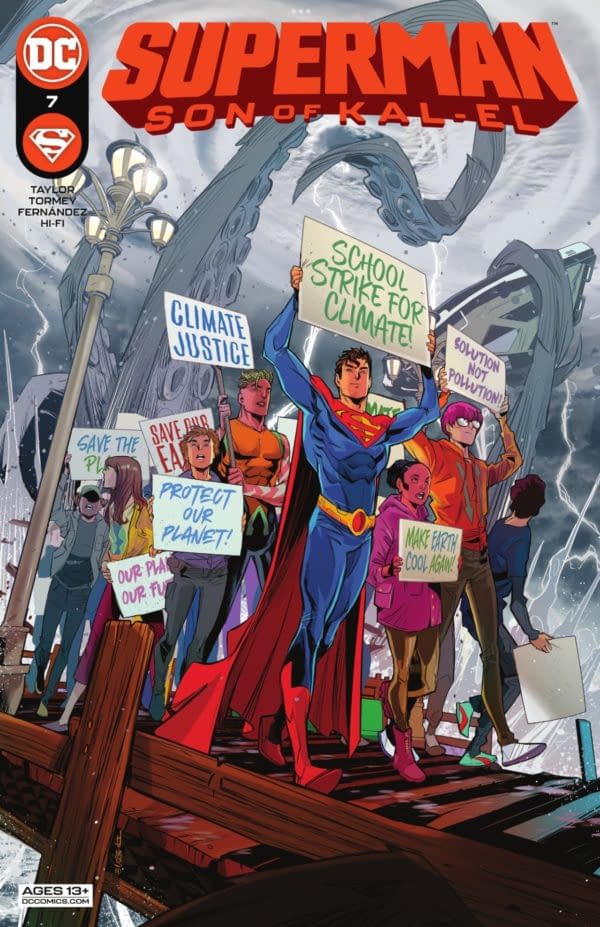 Review by Hannibal Tabu
7.5/10
A gigantic threat looms over Metropolis, and aside from that alliance between two bald guys jealous of Kryptonians, there’s a behemoth from beneath the waves!
Credits
Editors
Paul Kaminski, Jillian Grant

In this episode of Castle Talk, Jason chats with Erica Friedman, author of By Your Side: The First 100 Years of Yuri Anime and Manga. The publishers call

Comic Store In Your Future: Make More Money With A Simple Idea

My store is coming up on its twelfth year in business this October. Even after all this time, I still learn and make changes in the store. I wrote about

The Surprising History Behind All-New Comics #4, Up for Auction

All-New Comics #4 (Harvey, 1943) contains a story "Poison in the Universe" based on real WWII history.