Hey gang!  It's been quite a while since we've actually gotten a live new episode of SmackDown on Fox, seeing as last week was New Year's Eve and WWE had a "Best of 2021" on FS1, and the week before that was Christmas Eve and WWE aired a lame pre-taped show.  So it's a new year and we're back with a new SmackDown, does that mean some new exciting action is in store for us?  Let's find out!

We don't waste time here as the show opens with the Universal Champion Roman Reigns marching to the ring.

He grabs a mic and says he was thinking about how he never wants to see two people again: Brock Lesnar and Paul Heyman.  And that brings out the WWE Champion and his advocate.

Heyman tries to start his classic introduction, but Lesnar stops him and instead gets in Reigns' face and does his own version of it.  Lesnar then challenges Reigns to a title vs title match and Reigns says it's a good idea, but it's not his idea and he does what he wants on his show.  He says he won't do business with people who do business with trash like Heyman.  Heyman then starts whining about how he loved Reigns and that angers Lesnar, who tells him to shut up.  Reigns then hits Lesnar with a Superman Punch and ducks out.

We now go to a backstage interview with Sami Zayn who speaks about his match with Rick Boogs tonight and his impending Intercontinental title match with Shinsuke Nakamura.  His attention is drawn to Johnny Knoxville though and he lectures Knoxville about entering the Royal Rumble match and how it's a bad idea.

Boogs continues to impress me here, mixing his powerful strength and technical abilities with some serious charisma.  They need to find a way to push this guy on his own cause I think he has something.

What's questionable here is how Zayn is used throughout.  He is being played as a total inept clown, which doesn't make the most sense if you're trying to build him as a viable heel threat that will be challenging for a big title soon.  He gets very little offense in here and after exchanging some words with Nakamura on the outside, he hops in the ring for Boogs to get an inside roll-up on him for the win.

After the match, Zayn throws a tantrum in the ring, only for Johnny Knoxville to run in and throw Zayn over the top rope.  We then get an announcement that Knoxville has qualified for the Royal Rumble match.  Ok.

Next, we go to a backstage interview with The New Day, where they speak about their Street Fight for the SmackDown Tag Team titles against The Usos tonight.  They do their schtick and guarantee they'll win.

The SmackDown Women's Champion Charlotte Flair heads out now and says she's out to make history.  She then starts discussing the Royal Rumble match and introduces a video package announcing some of the entrants in the Women's match, which surprisingly includes the current IMPACT Knockouts Champion and former WWE star, Mickie James.

Impact Knockouts World Champion @MickieJames will be in the #RoyalRumble Match! #SmackDown pic.twitter.com/TXH0jm6QgE

Flair then announces she herself will be entering the match as Champion so that she can choose whomever she wants to face at Wrestlemania.  This brings out Naomi, who challenges her to a title match, which of course Flair says no to.

What has @NaomiWWE done to "deserve" a match with @MsCharlotteWWE? #SmackDown

Naomi then slaps Flair and throws her out of the ring, which starts an impromptu match.

The match is a decent one with some fun offense.  After Naomi hits Flair with a Blockbuster on the outside, Sonya Deville wanders out and says the match can't be won by count-out, which allows Flair to get right back into it.  Deville then says it's a No DQ Match and it can only be won by pinfall or submission.  Eventually, Flair hits Natural Selection for the pinfall and the win.

We now go to a backstage interview with The Usos, who do their own schtick and they guarantee they'll win.

From there we see Deville speaking with Adam Pearce about how he needs to pick Roman Reigns' opponent for the Royal Rumble by the end of the night.

Happy Corbin heads out now for some guaranteed stupidity, which includes him bringing out Madcap Moss dressed as the injured Drew McIntyre.  Eventually, The Viking Raiders head out to interrupt this nonsense and a tag team match breaks out.

The match is a quick and boring one with a silent crowd.  Moss hits a modified neckbreaker for the win.

Next, we get a backstage promo from Sheamus, where he announces he's entering the Royal Rumble match.

We then head to Roman Reigns' locker room, where Adam Pearce tells him that he's chosen his opponent for the Royal Rumble, which Reigns says he doesn't care about because he's beaten everyone on the roster.

The match is whatever.  We've seen it three million and two times before in every possible variation.  Can they really not find anything else for these four guys to do other than face each other over and over and over?  There's a point that looks interesting, where The Usos tape Woods to the ropes, but Kofi immediately frees him so it's all for nothing.

It's not a bad match by any means, it's just that we've seen this far too many times and there's really no excitement left to be had here.  There's no mystery left to it.

Eventually, things get silly when Woods and Kofi put on knight armor and weaponize themselves.

A table gets thrown in the ring right as the Usos start to take over and they 3D Kofi through the table for the pinfall to retain.

Winners and still Champions: The Usos

We now go to Roman Reigns' room again where we see Seth Rollins enter to reveal that he's who Reigns will face at the Royal Rumble.

And that's that for SmackDown this week.  Yet another in the long, long line of episodes that show when some combination of Roman Reigns, Brock Lesnar, or Paul Heyman isn't on screen, it's probably not worth watching.  But with Seth Rollins potentially entering the picture, maybe there's some hope for more excitement?  At least he wrestles every week. 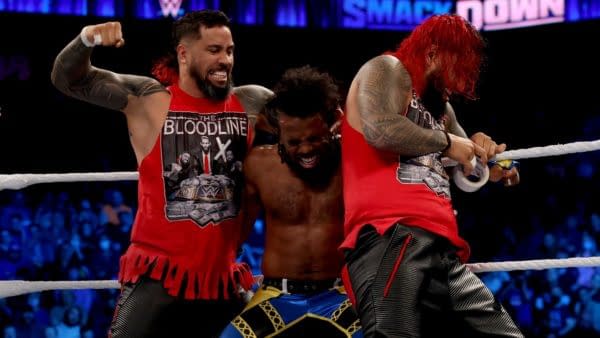 Review by Ryan Fassett
3/10
The Roman Reigns/Brock Lesnar/Paul Heyman stuff continues to be the horse that pulls the SmackDown cart, but unfortunately, that horse only appears sporadically and the majority of the time, the cart is left sitting in a pile of manure. We got yet another Usos vs New Day match, which we've seen far too much of and the rest of the show just didn't have much energy.