Since making former Champion Charlotte Flair scream "I Quit!" at WrestleMania Backlash last month to win the title, SmackDown Women's Champion Ronda Rousey has only been challenged by main roster newcomer and former NXT Women's Champion Raquel Rodriguez.  That's drawn the ire of the other veteran women on the roster and this week they had a Six-Pack Challenge to determine who will be losing to Rousey next.

Drew McIntyre & The New Day vs The Brawling Brutes

So we kick off this week's show with the match that main evented last week's SmackDown, cause WWE just feels the need to repeat the same matches over and over for weeks now instead of coming up with anything new.

Kofi Kingston and Xavier Woods open it up by doing some schtick on the mic and they're eventually joined by McIntyre for some more comedy.  They're all so likable and charismatic that this actually works pretty well and it culminated with New Day giving McIntyre a new neon-colored kilt for his birthday.

The ensuing match is fine just as it was last week.  Everyone here knows what they're doing and have all faced each other enough at this point that there are no surprises.  Eventually, McIntyre and Kofi are contained outside the ring, allowing Butch to hit the Bitter End on Woods for the pinfall.

Next, we get a backstage interview with Riddle and Shinsuke Nakamura ahead of their title match against The Usos later.  Riddle promises to get revenge on The Usos for his fallen partner.

"And @RandyOrton, my best bud, this one is for you bro." @SuperKingofBros is dedicating this match tonight to The Viper. #SmackDown pic.twitter.com/JrRlsfVNg5

We then go to SmackDown Official Adam Pearce's office, where he's confronted by Max Dupri, who informs him that he's found his first client and will reveal him next week.

Jinder Mahal, with Shanky vs Humberto, with Angel

So Shanky is full-on into this new dancing loon who can't wrestle gimmick, an update to his former gimmick of being a boring tall guy who can't wrestle.  The match lasts about a minute or so, as there's a weird finish where Shanky's dancing distracts Mahal, and that allows Humberto to roll him up.  But then Shanky jumps to the apron to distract the ref and when Humberto screams about it, Mahal rolls him up for the pinfall.

After, Shanky again dances badly with the SmackDown ring announcer as we assume Vince howls with laughter backstage.

At the outset of this one, we see that Shotzi has locked Aliyah in the locker room as revenge for last week.  This is of course only a minor hindrance, as someone just unlocks the door and Aliyah starts the match as normal.

The match itself isn't very good.  It's short, there are quite a few botches, and it's mostly just uncreative one-on-one action while the others are on the outside.  In the end, Rodriguez plants Shotzi with a Texana Bomb before Baszler locks her in a Kirifuda Clutch and as she does, Natalya pins Shotzi for the win.

Next, a decidedly more badass-looking Madcap Moss returns to SmackDown with new intense theme music and actual wrestling gear so that we take him seriously now, and honestly, thank goodness!  The dude has a great look, is very good in the ring, and clearly has connected with the audience.  It's time to push him as a serious talent.

Moss cuts a passionate promo about burying the joke-telling goof from before and getting revenge on Happy Corbin for what he did to him.  Corbin heads out and mocks him, but Adam Pearce comes out and sets a match between them right now.

Moss chases Corbin around ringside a bit before clobbering him with a steel chair to earn a disqualification.  He brings the ring steps into the ring, puts a chair around Corbin's neck, and attempts to slam the steps on it, but officials rushed the ring and stop him.

We next go to a backstage interview with The Usos, where Jimmy actually does a really funny impression of Riddle.

We then see Corbin trying to leave the building, but Pearce stops him and sets a No Holds Barred Match between him and Moss at Hell In A Cell this Sunday.  Holy crap!  A SmackDown match on the Pay Per View?!  Do they dare?!

Next, we find out Ricochet will defend the Intercontinental title against Gunther next week on SmackDown and we get video promos from both men.

We get a pretty solid main event match here.  Not too long into it, The Usos injure Nakamura's knee at ringside and he's helped to the back by trainers, so Riddle is in it alone.

Riddle gives it his all and hits a top rope RKO on Jimmy, but the Roman Reigns' music hits, and Jey nails him with the Uso Splash for the pinfall.

We then see that Sami Zayn is in the production truck and playing Reigns' music to distract Riddle.  He then runs to the stage to celebrate with The Usos, but Riddle rushes him and tries to beat him up, but they're separated by a bunch of refs as SmackDown ends.

And that's that for this week's SmackDown on FOX and while it wasn't a terrible episode, it also didn't gain too much ground and only set up a perplexing one match for the brand for this Sunday's Hell In A Cell event, which appears to be pretty much a Raw only vehicle.  There's always next month, eh? 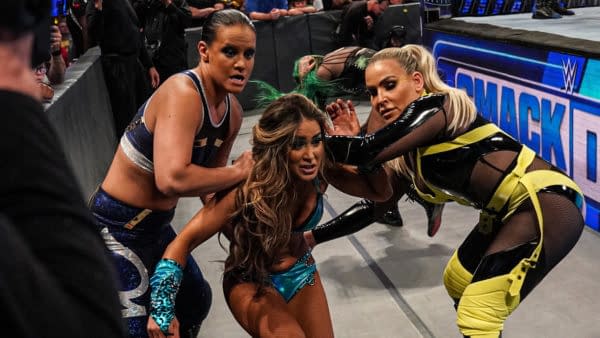 Review by Ryan Fassett
3.5/10
Not a terrible episode of SmackDown with some fun moments, but it didn't really move the ball down the field much, and shockingly, they only have one match for the brand on this Sunday's Pay Per View event.