This year's solid Mignola-verse spinoff is British Paranormal Society: Time Out Of Mind. Dark Horse regularly produces high-quality spinoffs, but it still feels nice to read. The setup isn't groundbreaking: A small town hides dark secrets (presumably monstrous), and the out-of-towners can't quite put their finger on something wrong.

Artist Andrea Mutti and colorist Lee Loughridge are the keys here. There's just the right amount of detail both in the background and foreground. Mutti also does fantastic work in implying movement. British Paranormal Society: Time Out Of Mind #1 always reads like each character is physically moving even though it's drawn. On a curious note, a colorist named Quinton Winter was solicited, but the issue credits Loughridge. Regardless, Loughridge's choices look rustic. The end result of Mutti and Loughridge working together is a setting that looks like a great place to spend a weekend.

If anything, writer Chris Roberson plays the plot a little too slow, but then again, it's a first issue, and for the monstrous payoff to be meaningful, setup has to be done. Then again, does anyone from the pre-BPRD go to a small village, and there turns out to be nothing there? If they did, there'd be no story, but still. Regardless, Roberson maneuvers the two main characters (a pre-Hellboy Simon Bruttenholm and a new to me character Honora Grant) well. Admittedly, the team deserves credit for crafting an issue that even a lapsed reader like me can follow instantly.

The reading experience of British Paranormal Society: Time Out Of Mind #1 is like putting on an old pair of slippers: It's comfortable and familiar. It's more difficult than it appears, but this team (which includes letterer and Mignola-verse veteran Clem Robins) makes it look easy.

British Paranormal Society members Simon Bruttenholm and Honora Grant arrive at Noxton together, but with separate goals: Honora hopes to uncover information on the town's strange traditions, while Simon is searching for his missing assistant. But their separate investigations lead down the same twisted path that hides a dark secret behind Noxton's innocent façade! Mike Mignola and Chris Roberson expand the Hellboy universe with a spooky new tale featuring art by Andrea Mutti with colors by Quinton Winter.
* Honora and Simon from Witchfinder in their own new series! 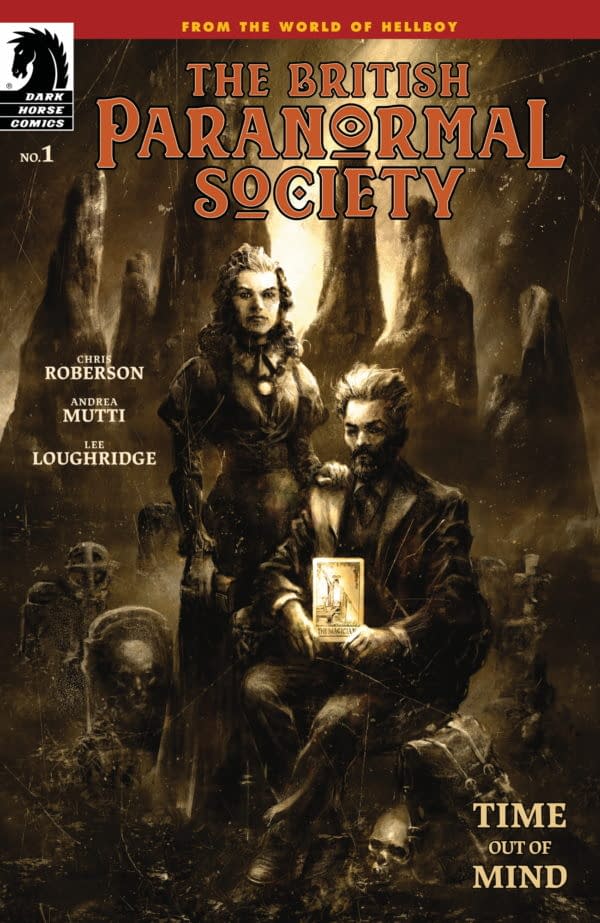