Christmas and the New Year are behind us, the kids have just gone back to school, I really hope they have a better time there today than in today's X-Files comic…

So I hear there's been a spot of weather on the East Coast of New York. Both in reality and in the Marvel Universe.

Yes, Avengers World #1, that does sound rather bad. Handy that Jersey resident and Bleeding Cool Editor-In-Chief Hannah Means Shannon is in Oxford right now, visiting her old college town and a few other folks besides. All she has to deal with is the flooding.

Oh and don't think you can just escape to the Ultimate Marvel universe either, it's even worse over there.

So much so, that they're flooding over here.

Herbies go bananas in Ultimate Cataclysm #3. Oh yes, and that scene before, because in last month's issue of Ultimate Spider-Man: Cataclysm, Spidey went and unmasked himself in front of his father. Spoilers.

Here's one potential temptation from today's Gothtopian Batwing. We went through a similar situation with Batgirl last month as well. But seriously, what's the worst that could happen?

Okay, yes, well, there is that. There are reasons to keep your mask on you know.

Talking of which you're the new Ms Marvel. You embody so much, a legacy of those before, you are a teenage, Muslim Jersey Girl, and you are so powerful. How you are seen, how you move, how you conduct yourself in public can have so many repercussions. The old Ms Marvel could fly. So how do you get around?

Not exactly that gracefully it seems. And wearing a mask? Well, I suppose she is from New Jersey.  [At this point, Jersey resident and Bleeding Cool Editor-In-Chief Hannah Means Shannon interjected and did something like this to Rich Johnston and Kevin Smith nodded in silent approval] 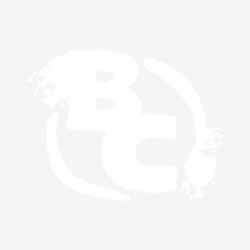 Thank you Walking Dead, normal service has been resumed. Time to get serious.

Yes, God Is Dead, I'm very serious. But instead of a heart attack, how about we go with a simple stabbing?

Actually, it's not really. Maybe the artists were asked not to portray so much to keep Gorlan Parlov's classic style here looking… classic. For those who want Peter Parker Spider-Man back, here he is… and looking like he's from 1986 at the same time!

We've all felt like that, Doombot, from today's Avengers: AI.

Batman/Superman has a line in empathetic extreme behaviour too, with one woman's motivation to kill the superheroes down to not getting a package into the post office in time. You know, I had just that yesterday with a couple of cartoons I sold on eBay. Don't leave me bad feedback, successful eBay bidders, please!

How cheering is that! Seriously, how could anyone have a frown after that kind of Regular Show handshake?

Old misery guts here, that's who. Cheer up Savage Wolverine! It can't be that bad!  Sure you're a mutated freak of nature, with claws embedded in your hands, like some offshoot of royal inbreeding of the upper classes.

Exactly, Sabretooth from Standard Wolverine, just like that. But things could look worse. You could look like this.

From Cryptozoic Man #3. And it's okay to show this image because those are pig nipples. Mmmm… pig nipples roasting on a spit…

Okay, that's enough of that, Red Rover Charlie. Anyone fancy ordering takeout instead?

Okay, sorry Talon from Forever Evil: Asylum, I couldn't manage a whole institute, an asylum or, say, an orphanage.

Okay, that's some tough love in Protocol Orphans there. Is that love? Or is it something else?

From Robocop Last Stand. I remember love and war as well. I hope his computer brain can remember more than those two states, or it's going to be a very messy life for Murphy.

While Stitched also looks at the origin of their particular breed of undead. And why the can works so well. Personally I thought it was all a metaphor on people collecting in the street for charity…

It's always nice when people visit without announcing themselves isn't it?

Sorry Adventure Time: Flipside #1. So how could you really surprise people?

You'd have thought that this method from Suicide Risk might do the trick but no, apparently they still know you're coming.

Crossed Badlands gives us hope that memories of Popeye will survive the apocalypse, even that dratted song.

Revolutionary War Alpha not only gives us a blast to the Overkill days of Marvel UK in the nineties, but also to the Alan Moore and Alan Davis days in Captain Britain. Something I'm a real sucker for. And I'm not alone.

Black Widow #1 pops out with some nicely painted panels and some hand lettering. We should have more hand lettering like this don't you think, embedded in the work it letters?

Okay, maybe not always. TMNT Color Classics #3 revives the past with a little hair styling advice from a bald turtle.

For those still missing Barbara Gordon as Oracle, or even Horsewoman from Demon Knights, I do hope you are picking up Gail Simone and Freddie Williams' The Movement... she dies seem to be a little… hands on.

Gambit takes a position on Pat Robertson and Hurricane Katrina in the All-New X-Factor. I wonder what he kinetically charged up… a peanut? A coaster? Pat's brain? Something small and potentially explosive, perhaps?

Aphrodite IX #7 tackles the age old question. Apparently, in modern day Top Cow comics, the answer is "if at all possible." Basically, you have to take everything off that you can.

Including your face in Shadowman, it seems.

Yes, yes, Bloodshot, it's all legal now, in Colorado, at least. Under certain circumstances. But should you really get all potted up on weed at important moments in your life?

Because you really shouldn't if you are using heavy machinery, working with small children, or giving yourself an orgasm in a lecture hall so that you can enter a state of timeless bliss and cause havoc around you… as well as giving yourself all tentacly arms. Welcome to the new Sex Criminals. I wonder what Cumworld is like on coke though?

Well, from Star Trek: Khan #4, I guess Khan does get to be put behind glass which a procession of folk walk up to look at him. Must be that enigmatic smile…

Okay, time to fetch the kids. See what they think of Adventure Time and Regular Show. I might keep Cryptozoic Man hidden though…

Comics courtesy of Orbital Comics, London. Currently hosting a Game Of Thrones exhibition featuring the storyboard and illustration work of Will Simpson, who will be giving a public talk on his work on Friday evening.

Spinning out of the Edge Of Spider-Verse event kicking off next week from Marvel Comics, Dan Slott and Mark Bagley will be launching a new Spider-Man

Tara Lehmann, Publicity Director at Oni Press who has been with the company for three years, posted yesterday "Even though I've known this day was coming

The ReedPOP organisers of the upcoming ECCC, the Emerald City Comic Convention of Seattle, sent out the following message to exhibitors regarding their

Mike Perkins, current artist on Swamp Thing, is not happy with Amazon and ComiXology this week. He posted to Facebook; It takes a long time to make a

Pariah wants to come in this preview of Dark Crisis #2, but first he needs everyone on Earth-0 to get down on their knees.

All of Steve Rogers' old enemies -- and some friends -- are teaming up against him in this preview of Captain America: Sentinel of Liberty #2.

Batman calls Catwoman in his Bat-underwear in this preview of Batman #125, but unfortunately she's in bed with another man.

Archie Horror is planning four new releases for the Halloween season, sure to be a Month of Mayhem for their publishing schedule.

Doctor Strange visits Krakoa in this preview of Legion of X #3, proving it isn't just mutants for whom death is totally meaningless!