FOX's Bob's Burgers season 13 premiere brought a mix of Shakespeare tales and sibling rivalry, all thanks to Mr. Fischoeder & his brother Felix. Warning, some spoilers may be waiting ahead for you, so make sure to watch the episode first and then come back if you don't want anything revealed to you. Otherwise, see you on the other side of this image break…

In "To Bob, or Not to Bob," the Belcher family gets a taste of conflicting emotions. For Bob, the emotions surrounding possibly expanding the restaurant make for much more than just an easy "YES," and Louise's desire for more restaurant responsibility becomes a race to grow up fast. In this episode of Bob's Burgers, there are lessons in staying in the present moment without looking to the future in a limiting way, as well as holding onto the past for such a long time that it takes over what you care about. One part of this episode that helped make it a decent return for the series was part Linda's supportive nature and the realization the Belcher kids are able to come to on their own when issues arise.

Hope I was able to avenge all of you tonight. 👻

See ya next week! pic.twitter.com/sThcIWgA7K

Bob's Burgers made a good decision going with a Fischoeder-related plot for the first episode. It connected well to memories from the film and used an often superb character set in Mr. Fishoeder & his brother, Felix. While the writing was often spot on with the jokes, it felt like things could have been pushed further into fun and absurd moments we've gotten from the series in past seasons. Moments such as Linda talking about dreams featuring a "penis basketball" and Mrs. Fischoeder accidentally watching a production of Hamlet when he hoped it was actually a burlesque show titled "Ham Legs" was the comedic bright spots I would have hoped for more of in the episode. While a truly entertaining episode, mainly because of jokes & some minor character development, this Bob's Burgers opener could have been truly great but felt like nothing I'd re-watch often like other episodes.

"The Merchant of Vermin"

"All The World's a Sage" 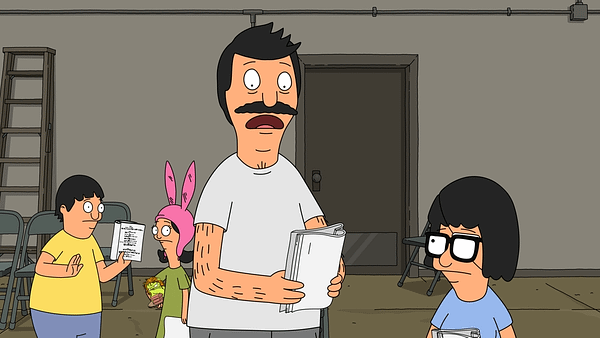 Review by Brittney Bender
7/10
FOX's Bob's Burgers S13E01 "To Bob, or Not To Bob" was a truly entertaining episode, mainly because of jokes & some minor character development, but this opener could have been truly great but felt like nothing I'd re-watch often like other episodes.
Credits
Network
FOX

With the animated series kicking off its Netflix run on December 15th, here's a look at a new set of preview images for Sonic Prime.