There's nothing like some old underwear in a pizza box to throw everyone for a loop, and that's exactly what happened in this episode of FOX's The Great North. If you prefer to avoid spoilers of any kind & at any cost, turn back now and watch before you read any further. Otherwise…

While Beef gets nervous around Alyson during a movie night in Wolf & Honeybee's home, Judy attempts to keep her murder mystery part active and fun but is upset to find Gill reading a vital clue from his character card, therefore cutting the investigation short. First off, the interaction between Judy, Ham, Moon and their friends (including the lovely display from Ham's boyfriend, Crispin) was so well done and had me smiling again and again. I love seeing these characters from The Great North talk to one another and be honest in a way you don't see in a lot of adult animated shows. The investment that is being put into the minor characters, including Judy's best friend Kima, has been benefitting the series as a whole.

It was truly nice to see the character of Alyson talking to Beef, there was a promise between them back in the first season so I'm glad to see that returning. In The Great North, Judy is relatable in many ways as is her desire for chill time to hang out with her friends and get into planning parties as she does. The way Ham and Crispin interact and discuss things with each other is such a breath of fresh air. Sometimes queer relationships are treated as fragile, odd, or like the writers are trying too hard, but with these two it felt so much more natural and commonplace. Those moments alone gave me a ton of joy. One day, I hope for a two-part special similar to this episode full of mystery and great minor characters' lines but for now, I'm happy with what I watched and hope that it's a sign of even better things to come. 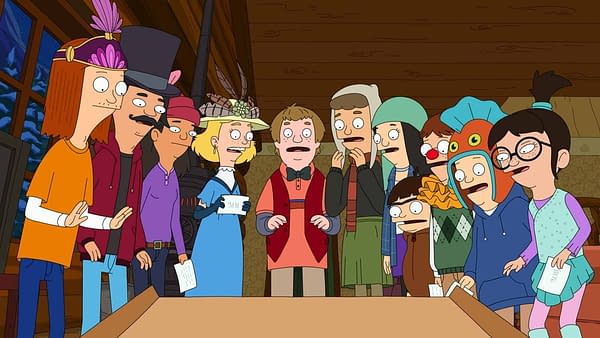 Review by Brittney Bender
9/10
This episode of FOX's The Great North proved that developing the personality and agency of minor characters only increases the development of the main ones. A story of missing pizza and parties brought fun and laughter to the screen as the animated series continues to impress.
Credits
Network
FOX

Disney Channel gave millennials lots to love in the early 2000s with Christina Milian's Kim Possible theme song being one of them.

SYFY's Astrid & Lilly Save The World introduces an engaging friendship and universe where monster-hunting is hilariously fun & frightening.

Yellowjackets star Samantha Hanratty openly discussing her bisexuality & her place in the LGBTQIA+ community matters in so many ways.

The official trailer for Netflix's Murderville provides us with a look at how our celebrity guests are handling the mystery & absurdity.

Kate McKinnon & John Cameron Mitchell face off in a teaser trailer for Peacock's Joe vs Carole, based on the Tiger King controversy.

Danhausen is All Elite after debuting on AEW Dynamite last night, but it's The Chadster who is truly Beach Broken after the event. Auugh man! So unfair!

Nancy Drew S03 Finale Preview: Does Nancy Have an Ace Up Her Sleeve?

With the series wrapping up its Season 3 run this Friday, The CW's Nancy Drew is offering a preview for "The Ransom of the Forsaken Soul."

James Gunn confirmed a second "The Suicide Squad" spinoff series is in development and likes the chances for Peacemaker Season 2.