Between The Empire Strikes Back and Return of the Jedi, with the Empire arguably at the height of its powers, a desperate Rebel Alliance works to overcome massive logistical challenges and sometimes overwhelming opposition to continue their fight against fascism. This includes a moment of spectacle that's truly worth seeing, another impossibly doomed mission in the middle of nowhere, and a mystery best left to history. Altogether, Star Wars #15 makes for a solid, if not wholly inspiring, moment in the franchise.

With a nearly fatal use of codebreaking, the Empire has fractured the Rebels' ability to communicate during this period, turning every message into a potential death sentence. This leads a special operations team called Starlight Squadron to team up with Luke Skywalker and head out to the outer rim, finding a planet not quite as regularly volcanic as Mustafar but with its own interesting irregularities at play. A pitched battle between ragtag Rebels and a Star Destroyer full of Imperials, commanded by a monocle and fur coat-wearing admiral named Kalaxo.

This Charles Soule script continues a weird tendency to throw mundane bureaucratic hassles in as mitigating factors in the middle of huge combat missions that is turning out to be uniquely a Star Wars trait. Likewise, another Imperial dandy with an offbeat sense of style makes sadly predictable choices that heavily imply the Empire had a real challenge finding the right candidates for leadership positions (a problem many large organizations and governments share, admittedly). A tedious bit of fan service saps Luke's competence. At the same time, the book hinges far too heavily on super intricate artwork (gorgeously rendered by Ramon Rosanas, Rachelle Rosenberg, and Clayton Cowles) and one bit of spectacle-worthy in scale to match the Battle of Scarif.

If you eat up everything Star Wars, this has enough nostalgia points to earn you a reward, and you'll likely need this. If your benchmark for legendary Star Wars moments is set slightly higher, Star Wars #15 might just impact the surface. RATING: HONORABLE MENTION.

Star Wars #15
By Charles Soule, Ramon Rosanas
'FRIENDS AND ENEMIES' LUKE SKYWALKER embarks upon an epic mission with WEDGE ANTILLES and the brave pilots of STARLIGHT SQUADRON to rescue a lost division of the REBEL FLEET. LEIA ORGANA, CHEWBACCA and LANDO CALRISSIAN attempt to save HAN SOLO from the evil clutches of BOBA FETT. But what hidden vision will the Force send to Luke about the troubles to come? 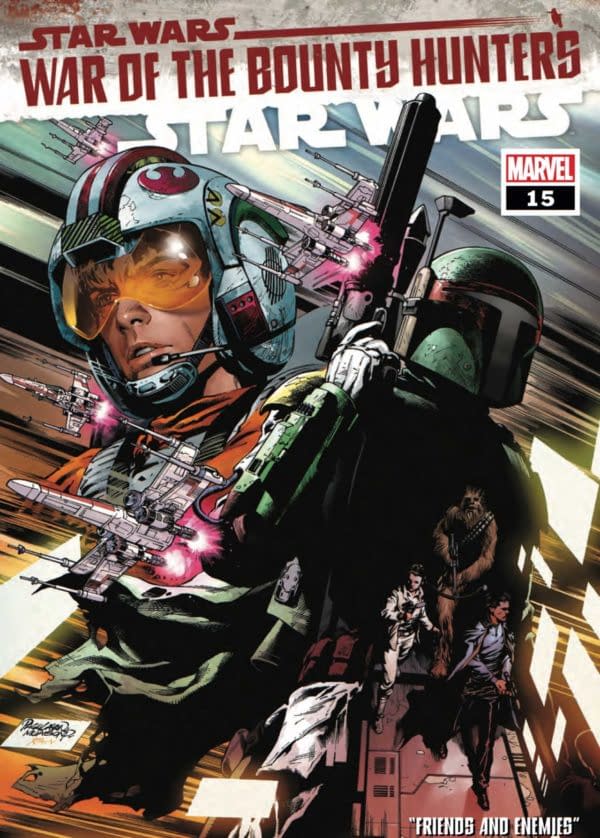 Across the universe, the cosmic law enforcement group called the Green Lanterns are up against the wall as the source of their powers lies in ruins, and