SpongeBob Squarepants is in the house. Well, not really, but the voice actor Tom Kenny is. 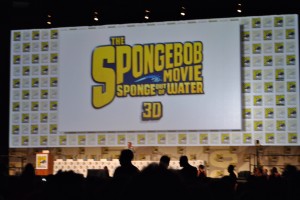 After the trailer, a quick trailer recapping the creation of the Teenage Mutant Ninja Turtles. The trailer built to a quick clip of the new film, giving way to the introduction of Turtles co-creator Kevin Eastman. 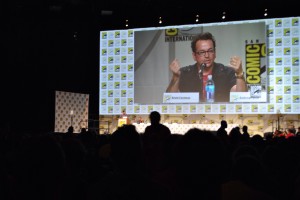 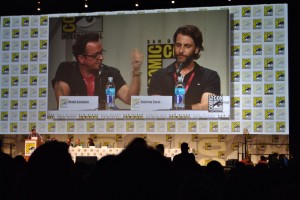 After playing never-before-seen footage of April O'Neil's discovery and introduction to the Ninja Turtles, the panel then introduced the actors of the films, Megan Fox and Will Arnet.

The two stars talked about their introduction to the Turtles and coming on board to the production before going to the Q&A. 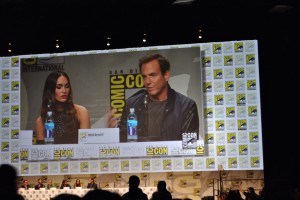 The first fan asked why the Turtles fan base "won't die" and "who had the awful idea to make them aliens." Eastman said that the fans are amazing and won't let the franchise lose steam. For the last part, he pointed out that there was always a route in alien mythology, going back to issue 4 of the original comics where they discover the Ooze has alien origin.

Eastman called it their tribute to George Lucas and other space epics he and Laird loved.

The next question asked why there weren't more classic aspects from the shows, especially in regards to villains. Liebesman answered that they had to update a lot of the settings and characters to fit in the modern world.

The Ninja Turtles portion ended with a new clip, an action scene taking place on a snow-covered mountaintop. As a Turtles fan who is somewhat skeptical of the Michael Bay-ization of the franchise, I can honestly say it looked great. The action scenes gave focus to all members, giving them all a chance to shine with their weapons and talents.

Project Almanac was then showcased, a found footage film about time-traveling teens. It looked like a movie. 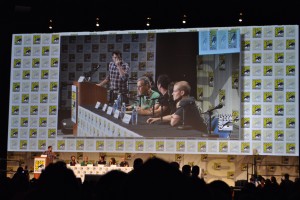 And as the panel was supposed to end, all hell broke loose when Dwayne "The Rock" Johnson took the stage to talk up Hercules. He walked through the crowd and gave his signature "Finally… The Rock has COME BACK to Comic-Con!" Might he be here for another large announcement? 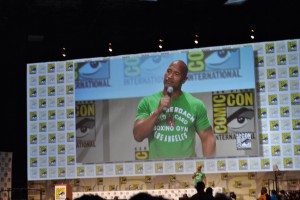 Well, this one has nothing to do with a certain magic word, but Johnson did announce that he rented three theaters that are screening Hercules today at 5 pm.

Just check his twitter handler, @TheRock, and he will announce the theaters. You must have a badge to attend.

Clark Duke hit the stage with a few booth babes (he wasted his hotel per diem to get them there) to introduce Hot Tub Time Machine 2. The trailer shows the gang (mins John Cusack) heading to the future to stop a murder. Well, if it ain't broke…

A surprise rivaling the Rock's appearance came packaged in Academy Award winner Matthew McConaughey  came to the stage after a quick teaser of his new film Interstellar.

Then he dropped the bomb that put everyone on their feet: Christopher Nolan is in the house.

The former steward of the Batman franchise received thunderous applause from the crowd.

Nolan spoke of his reason of making this film, and how it originates in his childhood fascination of being an astronaut which goes hand in hand with human nature and our penchant for exploration.

Both Nolan and McConaughey were mum on details about the film, but shared that Matt's character is named Cooper who comes across a chance to reignite his dream and explore space. Unfortunately that means he has to leave his family behind.

"No film is finished until it goes to its audience," Nolan said when asked about what his films mean to him. "It's really about human beings, what it means to be human."

The panel audience is watching the Interstellar Trailer.

The trailer was moving and bounced between quieter character moments, lavish visuals and amazing set-pieces. In other words, it's very much a Christopher Nolan film. And that's a good thing.

The Promise Collection 1944: Monsters of Gotham

The Promise Collection is a group of high grade comics from 1939-1952, and the second half of 1944 featured the debut of Solomon Grundy.

We have a new all-time record paid for a comic book: Amazing Fantasy #15 CGC 9.6, the first appearance of Spider-Man, has sold for $3.6M.

The Centuries-Spanning Cimmerian Tales of Garth and Malu, at Auction

The centuries-spanning tales of Garth and Princess Malu were inspired by a British comic strip and Conan the Barbarian.

The Promise Collection is a group of high grade comics from 1939-1952, in the first half of 1944, Captain Marvel, Superman vied for the top.

Sheena is one of the most important female comic book characters ever created, and her Fiction House series 1942-1953 is worth a look.

David Bowie wasn't the only choice to play the Goblin King in Jim Henson's 1986 classic Labyrinth with Sting and Michael Jackson as options.

The Unbearable Weight of Massive Talent: Why Nicolas Cage Won't See It

Why Prisoners of Ghostland star Nicolas Cage is unwilling to see his fourth-wall action comedy The Unbearable Weight of Massive Talent.

Giveaway: Win A Free Copy Of F9: The Director's Cut

The record-breaking global phenomenon Demon Slayer -Kimetsu no Yaiba- The Movie: Mugen Train arrives with both a Limited Edition Blu-ray™ from Aniplex of

Welcome To The Blumhouse: The Manor Trailer Debuts

The final Welcome To The Blumhouse trailer is for The Manor starring horror icon Barbara Hershey. It debuts on Amazon Prime Video Oct. 8th.