Hey gang!  It's only two weeks and counting until one of WWE's biggest events of the year, the Royal Rumble, which also kicks off the road to Wrestlemania.  So with only three episodes of SmackDown left until the big event on January 29, they really need to make them count.  Will they though?  Well, that remains to be seen.  So far, the Women's Rumble Match is more built than the Men's, but at least the SmackDown main event match is set, as Universal Champion Roman Reigns will defend the title that he's now held for more than 500 days against his former stablemate and current Raw star Seth Rollins.  Let's take a look and see if they were able to move the ball down the field on the newest episode of SmackDown.

We kick things off with the SmackDown Tag Team Champions, The Usos, hitting the ring.  On commentary, Michael Cole does confirm that Xavier Woods was injured in last week's match and will be out "indefinitely".

The Usos say they respect The New Day because they're the only team that can push them, but they're still the best.  They then introduce four teams that will now compete in a Fatal Four Way Tag Team Match to name the number one contenders for their titles: Los Lotharios, Cesaro & Mansoor, Jinder Mahal & Shanky, and The Viking Raiders.

Which team will earn a shot at the @WWEUsos' #SmackDown Tag Team Championship?

We'll find out NEXT in a Fatal 4-Way Tag Team Match! pic.twitter.com/TGAz5qNqTE

The Usos hop on commentary for this one.  The match is pretty much just an assembly line spot fest that doesn't make much use of the rules.  Eventually, the Vikings hit the Viking Experience for the pinfall to become the number one contenders for the SmackDown tag titles.

We now head backstage where Naomi confronts Sonya Deville to keep maybe the weirdest and most nonsensical "rivalry" in WWE today going.

"You come waltzing in my office with your main character vibes, when everyone knows you're just an extra." – @SonyaDevilleWWE #SmackDown @NaomiWWE pic.twitter.com/lvhU2r36sm

Sami Zayn now heads out, where he rants about Johnny Knoxville and announces he's officially entered the Royal Rumble match.

Zayn then says he's going to out-jackass Knoxville and promises the most spectacular stunt show ever, In-Zayn.  He then comes out being pushed in a shopping cart by two guys and says he's going to jump off of a ramp and fly over the ring.

After much hesitation and false starts, Zayn stops the stunt and says he has to check his surroundings to make sure it's safe for him.  Rick Boogs (rocking a new haircut) hops to the apron to distract Zayn, while Intercontinental Champion Shinsuke Nakamura sneaks in the ring behind him and lays him out with a Kinshasa Kick.  Boogs then Military Presses Zayne over his head and throws him over the top rope to the outside.

We now go to a backstage interview with Aliyah ahead of her first SmackDown singles match, where she'll face Natalya.  She says how nervous she is, but is then interrupted by Natalya, who brags about some Guinness World Records that no one cares about.

Alright so, this thing is a whole idiotic cluster from the start.  Natalya jumps Aliyah before the bell and beats her down.  Why they didn't ring the bell and start the match is beyond me, as this happens all the time.  The ref separates them and then there's a whole back and forth situation where the ref wants to cancel the match, but Aliyah convinces him to let her compete, which he does.  They ring the bell and Aliyah immediately rolls up Natalya for the pinfall and they're saying this is the fastest win in history.

Michael Cole is in the ring to welcome back WWE Hall of Famer Lita, who is appearing on SmackDown for the first time in nearly 20 years.

Cole asks her why she's back to enter the Rumble match and Lita says she thinks she still has one run left in her.

"I think I've got one run left in me."#SmackDown #RoyalRumble @AmyDumas pic.twitter.com/En77EEjGdF

She says she's going to win the Rumble match and head to Wrestlemania, which brings out SmackDown Women's Champion Charlotte Flair, who says she's winning the Rumble and will end her comeback.  She then asks Lita how she's going to handle the humiliation of her ending her?  They have a sassy back and forth until Flair guarantees to retire Lita and Lita responds by hitting her with a Twist of Fate.

We now go to a backstage interview with Sheamus, who says he's taking on Ricochet tonight to get revenge for him injuring Ridge Holland at WWE Day 1.

Here's your only legitimate match of the night and it's a pretty decent one, which isn't surprising considering who's in the ring here.

It gets better as it goes, as they hit each other with some fun offense and get some exciting reversals and near-falls in.

Ricochet tries a Handspring off of the ropes but eats a Brogue Kick from Sheamus on the other side of it for the pinfall and the win.

Kofi Kingston hits the ring and reads a message from King Woods on a scroll, saying he was injured and will miss the Royal Rumble, but in his absence, Kingston will enter the match.

#KingWoods may be missing the #RoyalRumble Match due to injury, but WE WILL have royal representation in the form of #SirKofi!#SmackDown @TrueKofi pic.twitter.com/cNT8fL6lml

It's idiot time as Happy Corbin and Madcap Moss head out and announce they're entering the Rumble and Corbin says he's going to eliminate Kingston himself.  They then exchange some poop jokes back and forth (Vince McMahon is truly a brilliant writer) and start a match.

They have a silly short match (where yes, Kofi at one point pretends to take a dump on Moss' head) and Moss hits Kingston with The Punchline for the pinfall and the win.

Roman Reigns follows and heads out next.

Rollins offers to do the old SHIELD fist bump with him, but Reigns says that's beneath him now.  They then have a back and forth over who's better, but Rollins points out that he earned his accomplishments by himself while Reigns has always needed help.

Reigns then mocks Rollins, saying his wife is a bigger star than he is.  The Usos then run in behind Rollins and try to jump him, but Rollins dodges the attack and takes them out before strutting off to end SmackDown.

And that's the show.  It wasn't much of a show, with very little wrestling and a lot of tire-spinning.  But at least Vince got his poop jokes in.  That's all he really cares about at the end of the day. 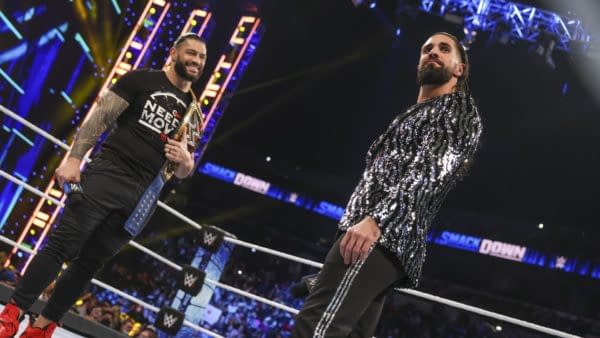 Review by Ryan Fassett
1/10
Sheamus vs Ricochet was pretty much the lone highlight of the show. It was two hours wasted and even the big face-off between Roman Reigns and Seth Rollins was a big dud with a silly and abrupt ending that didn't help further the feud or add any anticipation to seeing them face each other at the Royal Rumble.

Congressmember George Santos reportedly claimed they produced Spider-Man: Turn Off the Dark, raising questions like... really? That one?

Following up on a report from last month, Netflix's Squid Game: The Challenge is facing more accusations of unsafe filming conditions.

AEW Rampage Preview: Trios Titles on the Line in Worse Show Ever

The Chadster may hate everything about AEW Rampage and all that it stands for, but he's still here to provide an unbiased preview of tonight's show.