The Great North had their own first Halloween-themed episode of their series on FOX, making a great first impression and setting a unique standard for the Animation Domination lineup. While Beef Tobin sleeps during the dark Alaskan day, his children each have their own set of spooky and shellfish adventures. When Wolf accidentally spilled something on Beef's shrimp eating contest shirt I almost lost my mind from the absurdity of the shirt itself, but Wolf and Honeybee's adventures to win another one were even better. I felt incredibly happy, bringing a sense of Goosebumps quality of storytelling and Halloween vibes was what The Great North accomplished with this episode.

The amount of character involvement was a lot, but each minor character was treated and developed so spectacularly. From a kid's willingness to go crazy protective with a broken beaker, pure and adorable confessions of how one kid felt about his stepfather, and even Ham's moments with Crispin made me incredibly happy and made me pay attention (which is a difficult thing in itself). The episode brought in-jokes without compromising character identity, showing spooky scenes without forcing it, and all-in-all made a classic episode I'd put on my annual Halloween list.

I laughed incredibly hard when the deliriousness of the shrimp eating contest got to Wolf and Honeybee, whose waitress acknowledged the "seeing people as shrimp" stage in the competition. One time I got food poisoning from some bad shrimp…so I can relate to the distancing of oneself from a food group. The hallucinations and eventual retrieval of the contest shirt made up one of my favorite Wolf and Honeybee storylines so far outside of their wedding. Also, the quiet moment when Wolf placed the shirt on his dad's bed as he sleeps, dreaming of hilarious yet mundane activities he loves, made an impact on me. It's quiet moments like that one and the moment when Judy and Ham are saying goodnight to Moon (which also reminds me…how f**king cool is that bedroom?!?) that make me grow more and more respect for The Great North. The episode was overall a truly fun experience, bringing back the spooky joy of Halloween reminiscent of classic episodes in shows like Boy Meets World, without compromising the respect of their audience. 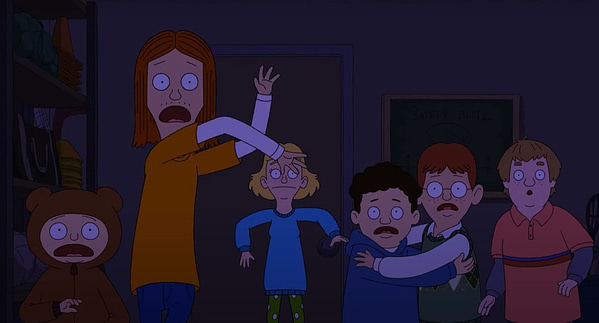 Review by Brittney Bender
10/10
This Halloween-themed spooky episode of FOX's The Great North Season 2 was full of jokes that hit and original surprises that made it a new animated classic for me.
Credits
Network
FOX

For All Mankind Season 3 Trailer: The Battle For The Red Planet Begins

The Apple TV+ space drama For All Mankind is coming back for its third season on June 10, when Mars becomes the new frontier.

Disney+'s The Mysterious Benedict Society has a cast with lots of social media love for the series, including some excellent Season 2 news.

With a video game sequel already on the way, AMC Networks looks to be moving forward on developing a series adaptation of Alan Wake.

South Park Music Madness reveals the finalists in the bracket competition. Here's who made the cut and how you can vote.

For All Mankind Season 3 Trailer: The Battle For The Red Planet Begins

The Apple TV+ space drama For All Mankind is coming back for its third season on June 10, when Mars becomes the new frontier.

Set to premiere later this year, Crunchyroll unveiled the anime teaser trailer for Chainsaw Man, based on the bestselling manga.

Doctor Who: Yasmin Finney Joins Cast; A "Rose" By Any Other Name?

BBC's Doctor Who confirmed that Heartstoppers star Yasmin Finney has joined the cast, playing a character with a VERY familiar name.

The Umbrella Academy: Are We Getting a Season 3 Trailer This Week?

Either we're REALLY tired or we know when Netflix is releasing an official trailer for The Umbrella Academy Season 3, thanks to new key art.