Let the WrestleMania fallout on SmackDown begin!  We have a lot of questions after this past weekend's mega event in Dallas and those weren't quite answered on Monday's Raw when newly crowned Undisputed WWE Universal Champion Roman Reigns didn't offer any of his plans going forward and instead punted the question to Friday's SmackDown.  Will he actually let everyone know what he has planned, or is this just some time-killing for the new super-duper awesome mega WWE Champion?  Let's find out.

We open the show with WrestleMania loser Ronda Rousey, who still comes out grinning like an idiot and trying too hard to look like a babyface, despite losing her title match on the big stage and the crowd still not reacting well to her.  She cuts an awkward and monotone promo where she challenges SmackDown Women's Champion Charlotte Flair to an I Quit Match at WrestleMania Backlash.  Flair then appears on the Titan Tron to tell her no.

This one wasn't great.  It felt like there was a real disconnect here with their styles and speed and it came off as very jarring.  They're both very good wrestlers, so this isn't a condemnation of them, but some guys just don't mesh well together.  Eventually, Woods gets a Small Package roll-up on Butch for the pinfall, even though he's noticeably not on his back with his shoulders down.  Oh well.

Next, we go backstage to find Sami Zayn complaining to Adam Pearce about his WrestleMania loss against Johnny Knoxville and demands a match against the next person who walks through the door, who happens to be Drew McIntyre.

Gunther has finally been called up to the main roster of SmackDown from NXT and he's brought Marcel Barthel with him, but now he's to be known as Ludwig Kaiser because… yeah.  So, as you can imagine, Gunther destroys poor Joe here and puts him away with no challenge.

And the call-ups keep coming as we now go to a backstage interview to introduce SmackDown to former NXT Women's Champion Raquel Gonzalez, er, Rodriguez!  She's interrupted by Los Lotharios, who creep all over her.

We now get Happy Corbin and Madcap Moss in the ring for Happy Talk and Corbin is none too happy after suffering his first loss of the happy era against McIntyre at WrestleMania.  Moss, meanwhile, is on cloud nine still after winning the Andre The Giant Battle Royal.

Corbin says that after some reflection, he's decided Moss is responsible for his loss to McIntyre.  Corbin criticizes Moss and insults him for a while and eventually, they come to blows.  They fight around ringside a bit before Moss runs Corbin off.

We now go backstage to find Jinder Mahal screaming at Adam Pearce and demanding an Intercontinental title shot against Ricochet, but they're interrupted by Ronda Rousey and her sour puss as she demands an answer from Pearce about her I Quit Match against Flair.

So I wouldn't quite call this a match, as McIntyre pretty much railroads Zayn right from the start and chases him around the ringside area until Zayn jumps the barricade and runs away through the audience and gets counted out.

Next, we get a video package recap of Pat McAfee's WrestleMania win over Austin Theory and his loss to Vince McMahon, before "Stone Cold" Steve Austin showed up to save the day.

We now get a video promo from Lacey Evans, who is being totally repackaged as a sympathetic and tough babyface (kind of dressed like Sonya Blade from Mortal Kombat) who suffered a traumatic and abuse-filled childhood and has survived it all to become a Marine and a WWE Superstar.

An ok match here that ends when Banks hits a Superplex on Morgan, but when they land, Morgan hooks Banks' legs for the pinfall.

Roman Reigns and The Bloodline hit the ring now and instead of focusing on what he should do next, he instead turns his attention to his cousins, the SmackDown Tag Team Champions The Usos, and tells them that he wants them to go to Raw and unify the Tag Team titles as he did with the main titles.

He's then interrupted by Shinsuke Nakamura, who doesn't get to say anything, as Reigns cuts him off and pretends to be understanding to him before the Usos hit Nakamura with a double Superkick.

And that's that for this week's episode of SmackDown, where nothing much happened and nothing really moved forward.  Boy, they're sure working hard in those creative meetings, huh? 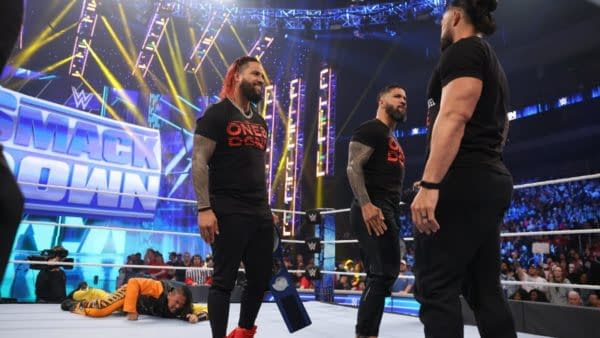 Review by Ryan Fassett
2/10
It was nice to see some NXT talent get called up to the main roster (albeit with new names), but this week's SmackDown was a big nothing burger. Reigns appeared for a few minutes at the very end and didn't get a new challenger or anything, while they continue to think anyone gives a damn about Ronda Rousey. Not good.

This Year's WWE SummerSlam Set for Detroit on August 5th

WWE SummerSlam will take place at Ford Field in Detroit this year, the one-time site of the Battle of the Billionaires featuring Donald Trump at WrestleMania 23.

Making up for the Raw 30 snub, Becky Lynch faced Bayley in a steel cage in the WWE Raw main event, and Lita was there to help Becky win.

The Flash Showrunner/EP Eric Wallace discussed some of the storylines the show would've tackled with Season 10 and beyond.